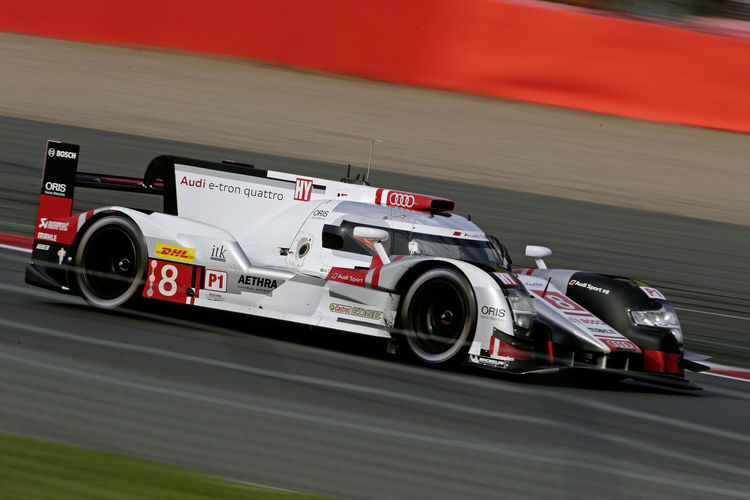 Motorsport fans can look forward to a thrilling FIA World Endurance Championship (WEC) season opener. In the qualifying session at Silverstone (Great Britain) the gaps between the top cars amounted to only a few tenths of a second. Loïc Duval, Lucas di Grassi and Oliver Jarvis, who will be starting the 6-hour race on Sunday from position three in their Audi R18 e-tron quattro, were the best Audi team.

Following heavy intermittent rain in the morning, the drivers started qualifying on a dry track at noon. The fastest man under the banner of the four rings was Lucas di Grassi, who in the number ‘8’ Audi R18 e-tron quattro set the first best time of 1m 40.180s. His team-mate Oliver Jarvis, who posted 1m 40.525s, managed a strong lap as well. In the WEC, the average of the two fastest laps determines the grid position.

“I’m happy with our grid position even though in the end only twelve hundredths of a second were lacking for the first row,” says Lucas di Grassi. “We know that our competitors are in a better position in qualifying, but I’m confident that we’ll be able to attack across the race distance and are going to deliver a thrilling race to the fans.”

The sister car, number ‘7’ qualified in fifth position on the grid. André Lotterer, who was the second-fastest Audi driver, and Marcel Fässler set the times for the car. “A fair to middling qualifying session in which we didn’t achieve an optimal lap,” says Lotterer. “But anything is possible in the race.”

Head of Audi Motorsport Dr. Wolfgang Ullrich’s assessment of the first qualifying session in the 2015 season was positive. “We saw a close qualifying session today in which the gaps between the top cars amounted to only a few tenths of a second.” The first two rows on the 5.891-kilometer track at Silverstone are separated by only six tenths of a second. Dr. Wolfgang Ullrich: “We didn’t achieve the pole position today. But we knew that our strength is not manifested by a fast lap but by consistency in the race. Therefore, the grid positions are a good base for Sunday.”