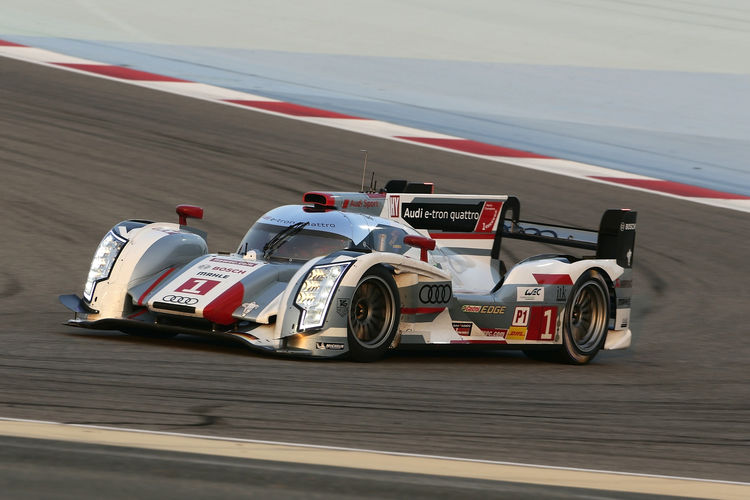 In the last qualifying session of the 2013 FIA World Endurance Championship (WEC), Audi had to admit defeat in Bahrain. The World Championship winning squad will start the race from positions three and four.

In the final qualifying session in Bahrain, Audi experienced an emotional roller-coaster. Initially, André Lotterer in the number ‘1’ Audi R18 e-tron quattro managed to set the fastest time before his lap was beaten by only 80 hundredths of a second. At the end of his two laps, he occupied second place in front of his team-mate Loïc Duval in the sister car designated as number ‘2.’

Marcel Fässler took over car number ‘1’ from Lotterer but on used tires was unable to counter the pace of the two fastest rivals. Allan McNish, who took over the cockpit from Duval, was running about a tenth of a second behind his team-mate on his two laps. As a result, the two hybrid sports cars from Audi Sport Team Joest qualified for grid positions three and four. In the aggregate of all qualifying sessions, Audi, in the 2013 season, achieved the top spot on the grid five times and challenger Toyota did so three times.

With track temperatures of 27 degrees centigrade it became clear in qualifying that the tires by partner Michelin will be decisive on the 5.412-kilometer track on Saturday. The spectators in Bahrain can look forward to a strategically exciting 6-hour race that promises a particular visual thrill in conditions of darkness from about 17:00.

The finale starts on Saturday at 15:00 local time (13:00 CET). The race can be watched on the internet by live streaming at www.audi-motorsport.com and www.fiawec.com. In Germany, a one-hour broadcast on Eurosport 2 will start at 18:00, followed at 21:30 by a 45-minute summary report on Eurosport.

Dr. Wolfgang Ullrich (Head of Audi Motorsport): “The qualifying session more or less reflects our performances in the sessions at previous events. This track probably isn’t ideal for our car, but it’s part of the World Championship and we’re going to make the best of it. On the first qualifying laps, we were on a par with Toyota. But afterwards the tires on our cars clearly degraded more heavily. That’s why Toyota is on the front row. That’s definitely not the most important thing in a 6-hour race, but it’s a bit of a pre-taste of Saturday. We’re going to battle hard for a good result.”

Chris Reinke (Head of LMP): “We traveled to Bahrain with the aim of successfully closing a very good season. We’re sticking to this goal even after the qualifying session. Obviously, the qualifying results are a little disappointing but we knew that the abrupt rhythm of this track doesn’t suit us well. Still, we’re determined to compete for the top spots again in the race.”

Ralf Jüttner (Technical Director Audi Sport Team Joest): “At the beginning, things were looking good when André Lotterer was following Toyota very closely. But after the driver change, on used tires, we lost too much time. Now we’re on the second row, which isn’t dramatic. In this race, the tires will be crucial – similar to the most recent event at Shanghai. There, it worked out and that’s what I’m hoping for again this time.”

Marcel Fässler (Audi R18 e-tron quattro #1): “André Lotterer completed two clean and very consistent laps. I was pleased with my first lap. I subsequently wanted to improve some more but hit traffic. We’ve got to recognize that Toyota was stronger than we were in qualifying today. I’m very happy with the balance of our car and our good squad is another forte in the race.”

André Lotterer (Audi R18 e-tron quattro #1): “On my first outing on new tires it was very close. We were almost in front. But it looks as though our tires degrade faster than those of our opponents because we lost more time. So we’ve got to do a few more things for the race. But it’ll be a long race. At Shanghai, three weeks ago, things weren’t looking so good either but we still managed to turn the tables.”

Benoît Tréluyer (Audi R18 e-tron quattro #1): “The track isn’t easy for us. We saw that our tires were superb only for two laps and then degraded a bit. That wasn’t so easy for the second drivers in the car but they, too, did clean laps. Toyota was simply stronger today.”

Loïc Duval (Audi R18 e-tron quattro #2): “The free practice session on used tires wasn’t easy because I wasn’t able to develop a real feel for the track. The second practice session was better and in the third one I drove many kilometers and got a better feeling. In qualifying, we weren’t as consistent as Toyota and couldn’t really attack.”

Tom Kristensen (Audi R18 e-tron quattro #2): “The temperatures in Bahrain are completely different this year than in the heat a year ago. That’s why the race won’t be as much of a physical strain as it was last year.  For two thirds of the distance, we’ll be running in darkness. It’ll be a nice 6-hour race that we’d like to win.”

Allan McNish (Audi R18 e-tron quattro #2): “A year ago, we achieved a one-two victory in Bahrain but even at that time we sensed that the track suited our opponent a bit better. I drove two clean qualifying laps. Unfortunately, we weren’t fast enough for the front row. But, on the whole, Tom, Loïc and I are happier now with the car than we were in the free practice sessions. I’m hoping that on Saturday we’ll be as competitive as the others.”