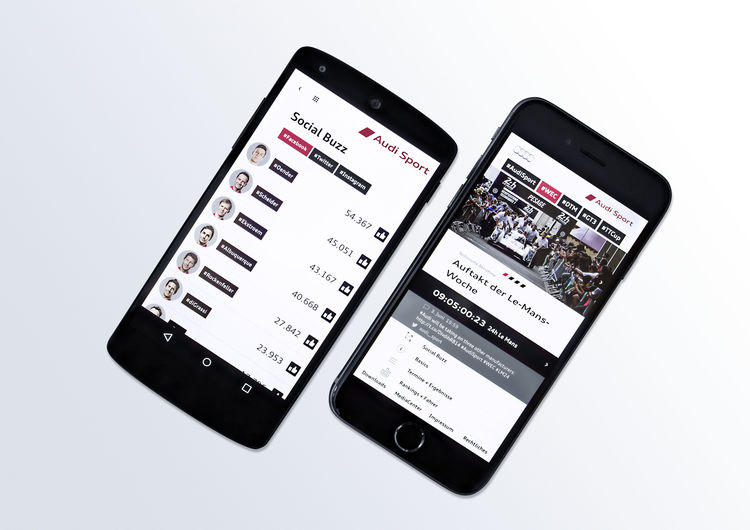 Right in time for the Le Mans 24 Hours, Audi is presenting a new version of the Audi Sport App for smartphones. It provides access to current information about the brand’s motorsport program and is available effective immediately.

The 3.0 version of the Audi Sport App for iOS and Android keeps fans up to date on the increasingly extensive motorsport involvement of AUDI AG. An interactive start page that provides current information on the FIA World Endurance Championship (WEC), the DTM, GT racing, the Audi Sport TT Cup or the entire motorsport program, as desired, is the centerpiece of the newly developed app. Navigation is intuitive using hashtags.

The integration of social media content plays a major role. It enables users of the app to access the latest tweets from Audi Sport’s official Twitter channel at any time and to select them by individual hashtags. A ‘social buzz ranking’ shows which Audi drivers have the largest number of likes and followers on their social media channels.

A dedicated team of online editors produces content specifically tailored for mobile use on smartphones 365 days a year. In addition, the app makes it possible for fans to express their opinions on current topics. The new app is available for downloading free of charge from the App Store and from Google Play.

Press releases, photographs and videos focused on Audi Sport are available in the new Audi MediaCenter effective immediately. The online portal at www.audi-mediacenter.com is easy to operate on all modern devices and replaces the previous motorsport database. The portal can be used without registration.