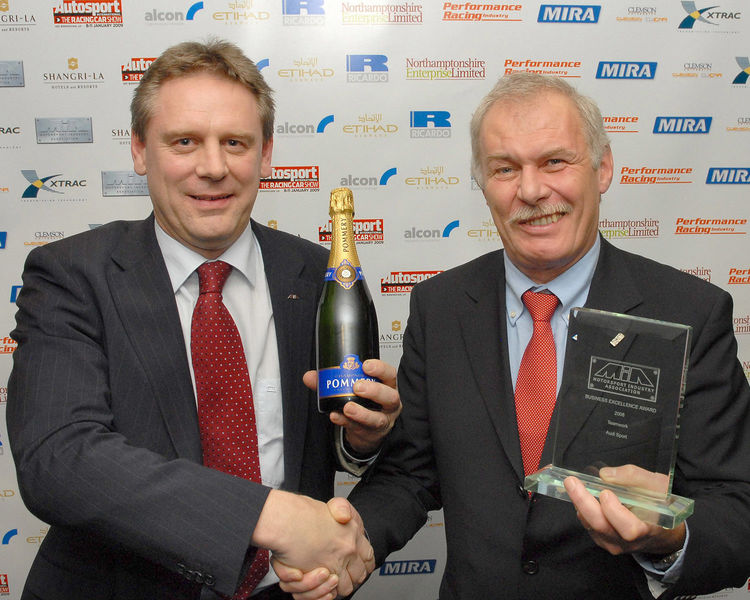 In the 2008 season Audi won everything the brand had set its sights on: The Four Rings stood for the four victories in the DTM, the American Le Mans Series, the Le Mans Series in Europe and the 24 Hours of Le Mans in what has so far been its most successful racing season. Audi now received special recognition for its string of successes with the R10 TDI and the A4 DTM by the Motorsport Industry Association (MIA), an important organisation of the British motorsport industry.

At the “3rd European Cleaner Racing Conference” held at the Autosport International Show in Birmingham Audi received the “MIA Teamwork Award” for the best team performance in motorsport. Ulrich Baretzky, Head of Engine Development at Audi Sport at the Neckarsulm location, received the accolade on behalf of Audi Sport.

Some 500 guests attended the awards dinner at the British trade fair at which Baretzky as a member of an expert panel explained the technology transfer between motorsport and production vehicles at Audi. In the laudatory remarks read in the presence of the British Minister of Science and Innovation, Lord Paul Drayson, the jury emphasised that Audi successfully completed all motorsport programmes of the 2008 season, thus having shown the strongest team performance in motorsport as well. Audi won the award, competing against nominated teams of renown, including – among others – teams from Formula 1.

“It fills us with particular pride to have received this international recognition by such a prestigious association,” said Head of Audi Motorsport Dr Wolfgang Ullrich. “On the circuits as well as at the MIA awards presentation we prevailed against the strongest of rivals. This is a special honour for all who have had a part in Audi’s exploits.”

In the past season the Audi A4 DTM and the Audi R10 TDI were fielded in a total of 28 races as part of the factory involvement. Timo Scheider with Audi Sport Team Abt Sportsline celebrated the title in the DTM. Alexandre Prémat, Mike Rockenfeller and Audi Sport Team Joest won the Le Mans Series in Europe, Lucas Luhr, Marco Werner and the Champion team the American Le Mans Series. At the 24 Hours of Le Mans Dindo Capello, Tom Kristensen, Allan McNish and Audi Sport Team Joest achieved the third consecutive Le Mans victory of the Audi R10 TDI.

In the 2009 season AUDI AG’s motorsport commitment again encompasses three pillars: With the new R15 the brand with the Four Rings will return to the starting grid at the 24 Hours of Le Mans and in the DTM with the A4 DTM. In addition, Audi – with the R8 LMS – for the first time offers a racing sports car that has been specially developed for use in customer sport.