Skip to content
We are using cookies for a better user experience.
09/24/18
Neuburg a. d. Donau
Sports 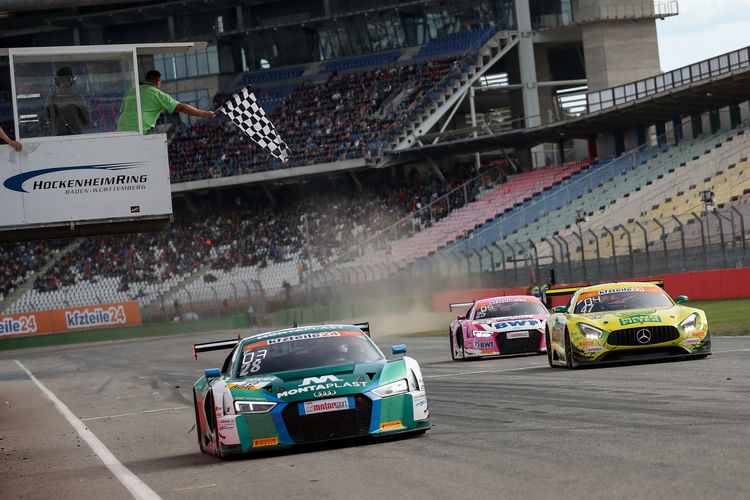 The teams of Audi Sport customer racing won titles and races this weekend and are now well positioned in several series to take on the remaining races.

Conciliatory end to the season: Montaplast by Land-Motorsport put in a strong final spurt in the ADAC GT Masters. Kelvin and Sheldon van der Linde celebrated third place in race one at the wheel of the Audi R8 LMS at the finale at Hockenheim and scored their second win of the season at race two. Only one point shy of the new champions Mathieu Jaminet/Robert Renauer, the South African brothers were crowned runners-up in the ADAC GT Masters. Second place in the team classification went to Montaplast by Land-Motorsport. Customer teams from Audi Sport have claimed six wins from seven race weekends of the 2018 ADAC GT Masters season. Nineteen-year-old Sheldon van der Linde also won the Pirelli Junior classification, beating 18 other competitors. In the ADAC GT Masters Trophy, Swiss driver Remo Lips came out on top driving an Audi R8 LMS for the Aust Motorsport squad. A total of 13 Audi R8 LMS contested the German GT3 race series this season.

Second title in Sweden: Jan Brunstedt has won the Swedish GT Championship for the second time in an Audi. Two second places at the final round in Mantorp were enough for the team owner and driver from JB Motorsport to take home the GTA category with a 49-point advantage. Over the course of the season, Brunstedt achieved a total of four victories and three second places with the proven Audi R8 LMS ultra. Already in 2013, the Swede had won the national championship in an Audi R8 LMS.

Title in Asia: Takuya Shirasaka and Naoto Takeda have taken home an early title in the Am-Cup of the Blancpain GT Series Asia. The two Japanese drivers from the KCMG team clinched the series title in this category at the fifth and penultimate event of the race series on the Shanghai circuit. So far this season, the duo has notched up a total of eight wins in the category for amateur drivers. In China, there was more reason to celebrate: Taking up the race from position nine on the grid, Anthony Liu from China and his Belgian teammate Alessio Picariello had charged through the field to secure second place in the first race. Also competing for the Absolute Racing team, Andrew Kim from Korea and Adderly Fong from Hong Kong improved on their seventh grid spot to finish third overall. All of these drivers put their trust in the Audi R8 LMS.

Narrowly beaten: At round five of the Super Taikyu Series in Japan, Phoenix Racing narrowly missed out on scoring victory with the Audi R8 LMS. After five hours of racing on the circuit of Motegi, the driver trio Mathias Beche/Lim Keong Wee/Melvin Moh were beaten to the flag by a mere 1.6 seconds.

Perfect Monza weekend: Jean-Karl Vernay achieved a top result with the Leopard Lukoil Team at round six of the TCR Europe. Pole position and two race wins were the best possible result. Of particular note: due to the reversed grid lineup, the Frenchman had to take up the second race from P10 on the grid. This didn’t stop the 30-year-old Audi Sport driver from sweeping into the lead in the Audi RS 3 LMS after just three laps. Although Vernay had missed out on contesting the second race weekend of the season in May due to conflicting race commitments, he currently ranks second in the points. Heading to the finale in Barcelona in October, he lies 19 points behind Mikel Azcona from Spain, with 55 points up for grabs. Another Audi driver was thrilled to clinch an early title. Driving an Audi RS 3 LMS for the Pit Lane Competizioni team, Giovanni Altoè from Italy won the DSG Challenge for race cars with dual-clutch transmissions.

Second win of the season in Scandinavia: Tobias Brink achieved the second win of the TCR Scandinavia season in the Audi RS 3 LMS. At the sixth and final event of the year, the Swedish driver took up the second race from pole position. On the Mantorp Park circuit, he claimed an unchallenged lights-to-flag victory with a 3.1-second advantage for his team Brink Motorsport.

Third in the championship: Scoring third place, Niels Langeveld concluded the ADAC TCR Germany as the best Audi driver, while his team Racing One achieved third in the team category. The Dutchman finished second in the final race at the Hockenheimring. In the Rookie Challenge, the 17-year-old Max Hesse from Baden-Württemberg beat five competitors this season driving for his team PROsport Performance. Like Langeveld, he drove an Audi RS 3 LMS.

Victory on the Nordschleife: The Møller Bil team from Norway notched up its third straight class victory with the Audi RS 3 LMS in the VLN Endurance Championship at the Nürburgring. The driver trio Atle Gulbrandsen/Kenneth Østvold/Håkon Schjærin won round seven of the endurance race series after four hours with a three-minute advantage. With two races left on the calendar, the Norwegians have moved up the ranks to sit second in the TCR category and are now just 0.59 points shy of the leader.

Podium result in Japan: At round five of the Super Taikyu Series, the Birth Racing Project squad collected a trophy. Sharing the cockpit of an Audi RS 3 LMS, the four drivers Hirobon/Takuro Shinohara/Daisuke Yamawaki/Kouichi Okumura achieved third place in the TCR category on the circuit of Motegi after five hours of racing.

Overseas season begins: After an eleven-week summer break, the WTCR – FIA World Touring Car Cup will start its overseas season this coming weekend in China. The interim balance of the Audi RS 3 LMS drivers: Seven podium places from the first six race weekends, including two victories thanks to Jean-Karl Vernay. Lying fifth overall in the points, the Frenchman is also the best Audi driver. With two victories from the TCR Europe under his belt, he travels to China full of motivation. His Audi Sport colleagues Frédéric Vervisch and Gordon Shedden rank eleventh and twelfth on the FIA-WTCR points table. The privateers Nathanaël Berthon, Denis Dupont and Aurélien Panis have all scored points in the fiercely contested touring car championship. In the team classification, Audi Sport Leopard Lukoil Team is in fourth place, the Audi Sport Team Comtoyou lies eighth and Comtoyou Racing ranks tenth. The next round will be contested on the Ningbo racetrack around 200 kilometers south of Shanghai on the last weekend in September, followed a week later by the round on the city circuit of Wuhan, 900 kilometers further inland.