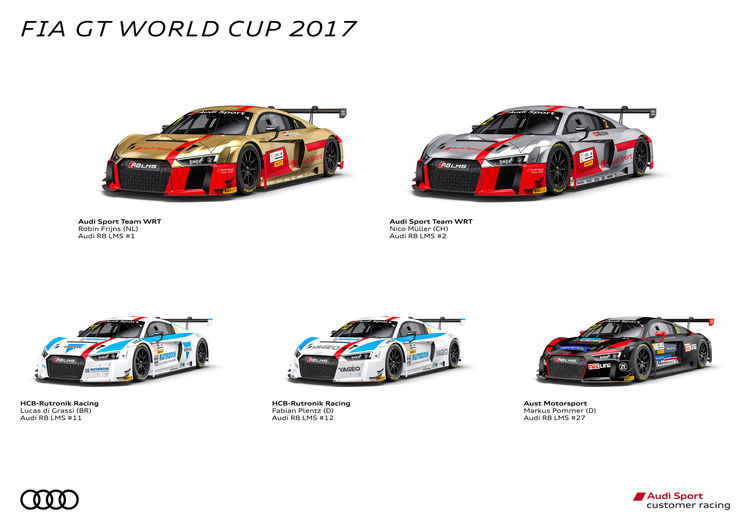 An ambitious mission for the title defender: Following a successful endurance racing season with victories at the Nürburgring, at Spa, at Road Atlanta and at Laguna Seca, Audi Sport customer racing is now aiming to win the most prestigious GT3 sprint competition of the year in Macau as well. The Audi R8 LMS has clinched four victories there since 2011, most recently in the drivers’ and manufacturers’ classifications a year ago.

A challenging circuit awaits the drivers there from November 16 to 19: a length of 6.2 kilometers, a track width of just seven meters in some sections amidst street canyons, 24 bends including a hairpin turn and guard barriers directly lining the edge of the track with no run-off areas. Solid track knowledge, high-torque engines, aerodynamic efficiency of the race cars and good traction are the prerequisites for success. In the fastest turn, Mandarin Bend, the race cars reach a speed of 260 km/h. Many young drivers get to know Guia Circuit in Formula 3 at the beginning of their careers, as did Lucas di Grassi. The Brazilian won the Macau Grand Prix in this category in 2005, is the current FIA Formula E Champion and will be tackling the title defense there with Audi.

33-year-old di Grassi is taking on the challenge in the Macau Special Administrative Region of the People’s Republic of China with the German HCB-Rutronik Racing team based in Remchingen that is preparing an Audi R8 LMS for a driver from Audi for the first time. On the Macau grid for Audi Sport customer racing as well will be Audi Sport Team WRT that won this race last year. The squad relies on 26-year-old Dutchman Robin Frijns who has previously clinched two championship titles in the Audi R8 LMS for the Belgian outfit. Nico Müller will be his teammate. The 25-year-old Swiss celebrated victory in the Nürburgring 24 Hours with Audi Sport Team WRT two years ago and is currently an Audi DTM campaigner.

Two ambitious German privateer drivers are completing the line-up: Markus Pommer will be tackling the competition in an Audi R8 LMS of Team Aust Motorsport. In 2015, as the best German, he achieved a remarkable fifth place in the Formula 3 Grand Prix in Macau. Fabian Plentz won the DMV GTC series in the Audi R8 LMS in 2016 and 2017. On making his debut in Macau a year ago, he came eighth as the second-best of six Audi campaigners in the field. Now the 29-year-old race driver from Pforzheim is again driving for Team HCB-Rutronik Racing.

“This is a strong line-up,” says Chris Reinke, Head of Audi Sport customer racing. “We’ll have three drivers from Audi and two ambitious privateer campaigners on the grid. WRT is a top-class team and title defender for Audi Sport customer racing. The new cooperation with HCB-Rutronik Racing makes it possible to deploy Lucas di Grassi who, together with Nico Müller and Robin Frijns, numbers among the favorites.”

The five campaigners and their rivals will be pitted against each other on the race weekend in Macau in two races following the practice sessions. On Saturday, November 18, a twelve-lap qualification race is scheduled. In the final round on Sunday, the drivers will be battling across 18 laps for the FIA GT World Cup.