Skip to content
We are using cookies for a better user experience.
07/28/19
Spa/Neuburg a. d. Donau
Sports 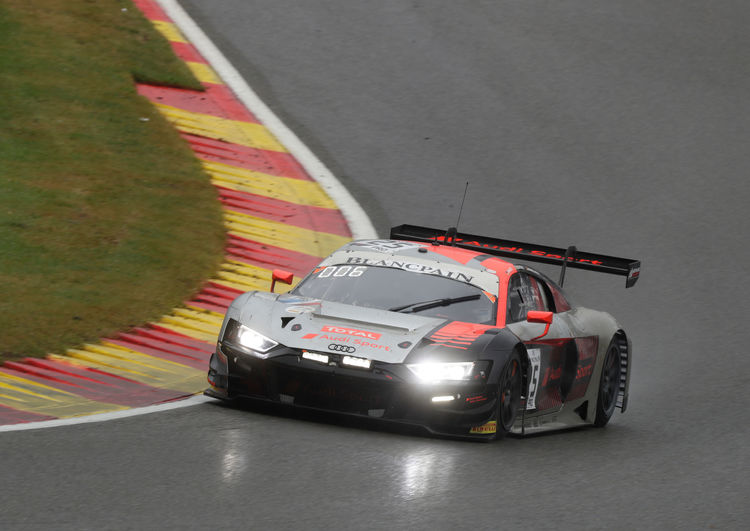 At Spa in 2019, Audi Sport customer racing was battling for its third 24-hour race victory this season. At the end of a race that was dominated by freak weather conditions and interrupted for several hours by heavy rain, the Audi R8 LMS, with the leading position having been maintained by Audi DTM drivers Robin Frijns/Nico Müller/René Rast in the gripping final stage, again proved its powerful performance capacity. Even so, drivers and teams were deprived of a podium finish in the overall classification. In the end, though, Audi Sport Team Saintéloc with the best Audi R8 LMS achieved third position on the list of IGTC teams entered and fourth overall.

“Suspense in the 2019 endurance racing season is rising,” says Chris Reinke, Head of Audi Sport customer racing. “The one-two result clinched by the evolution of the Audi R8 LMS in Dubai in January and our fifth victory at the Nürburgring showed that our new race car is immediately top-class. Now, Christopher Haase has clearly moved closer to the top spot in the Intercontinental GT Challenge standings.” The Audi Sport driver had arrived at Spa in fifth place with a 23-point deficit and is now traveling to the next race in fourth position with a gap of just 12 points. Together with his teammates Frédéric Vervisch and Markus Winkelhock in the Audi R8 LMS of Audi Sport Team Saintéloc, he finished in fourth place, which meant the best overall result for Audi Sport customer racing at Spa. The number 25 Audi R8 LMS was merely 4.4 seconds short of a podium finish. Because a participant that was classified in front of it is not an IGTC entrant, Haase and his teammates were awarded the points for third position. On their long way to the finish, the team had to overcome several setbacks. The 2017 winning team had not managed to qualify for the Superpole qualifying. The three Audi Sport drivers Christopher Haase, Frédéric Vervisch and Markus Winkelhock started the race from position 22. In the seventh hour, the number 25 Audi R8 LMS was leading the overall classification for the first time. However, two drive-through penalties during the night repeatedly caused Sébastien Chetail’s squad to lose ground so that fourth place in the end was a positive result.

Already in the early stage, Audi Sport Team WRT was among the front runners in the record field of 72 entrants as well. In the fourth and fifth hour of the race, the three Audi factory drivers from the DTM – Robin Frijns, Nico Müller and René Rast – were leading the field. After the race was stopped, the trio was again among the front runners and in the final stage was leading for several laps. However, a few minutes before the end of the race, René Rast had to avoid a group of cars across the wet grass and in the process slid into the track barrier.

A remarkable performance was achieved by a privateer driver team of Belgian Audi Club Team WRT. Rik Breukers, Norman Nato and Charles Weerts on seeing the checkered flag celebrated twelfth place among clearly more experienced competitors. A year ago, Team Montaplast by Land-Motorsport in third place had still been the best Audi team. This year, following three drive-through penalties, the squad with Ricardo Feller, Jamie Green and Christopher Mies had to settle for position 14. Audi Sport Team WRT with car number 2 that was also nominated for the Intercontinental GT Challenge was chanceless this year. Dries Vanthoor became the innocent victim of an accident and following repairs achieved the 25th spot together with his teammates Alex Riberas and Frank Stippler. Teams Attempto Racing and Phoenix Racing set the pace in the early stage in the Silver Cup classification, but both driver teams retired. Sixth place in this class went to Belgian Audi Club Team WRT with Shae Davies/Alex MacDowall/Paul Petit. The best result of Attempto Racing was 30th place by Milan Dontje/Kelvin van der Linde/Clemens Schmid.

Proud of their arrival at the finish as well were the participants competing under the Audi Sport R8 LMS Cup entry. The four best drivers from last year in the one-make cup of Audi Sport customer racing Asia shared a cockpit at Spa as a reward. Andrew Haryanto, Jeffrey Lee, Yasser Shahin and Sun Jingzu defied all adversities and finished in 50th place – two positions behind the privateer driver team Michael Blanchemain/Simon Gachet/Steven Palette/Pierre Yves Paque from Saintéloc Racing. As a result, eight of the eleven Audi R8 LMS that had started the race saw the checkered flag.

Following the 24-hour race at Spa, round four of the Intercontinental GT Challenge is coming up in Japan in just four weeks’ time. In the Suzuka 10 Hours, three Audi R8 LMS will be on the grid.