Audi shines in the rain at Hockenheim 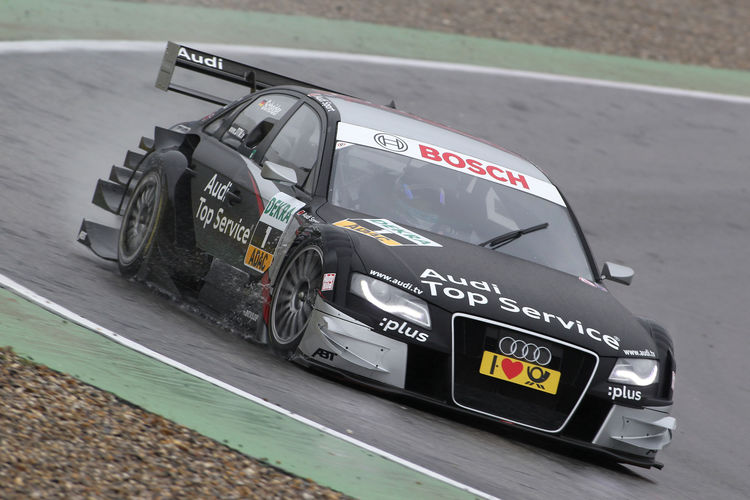 The brand that has been the first and only one in DTM history to win three consecutive titles handled the extremely difficult conditions in qualifying for the German finale of the 2010 DTM best: Timo Scheider clinched the pole position for Audi on the shortened Hockenheimring on a track that was wet from rain. His brand colleague Mike Rockenfeller will start from the first row too on Sunday (starting at 1:45 p.m. – local time – live on “Das Erste”) with his 2008-spec A4 DTM. With seven Audi A4 DTM cars on the top nine grid positions, the brand with the four rings is in an outstanding position for the race.

Timo Scheider, who had won the DTM title twice in a row at Hockenheim, in 2008 and 2009, managed a perfect lap at the crucial moment of the rainy qualifying: after achieving third, first and fourth places in the first three qualifying segments, the two-time DTM Champion in Q4 commandingly secured his ninth pole position in the DTM in total with an advantage of almost half a second. “Being the quickest in the rain is always particularly nice,” said the driver from Audi Sport Team Abt Sportsline. “And Hockenheim still has a very special meaning for me. Sitting on the pole position in an Audi in front of a home audience of fans at the German finale is a fantastic feeling.”

Mike Rockenfeller, who had delivered a remarkable performance as early as in the morning by setting a fastest time in free practice, was similarly pleased. In qualifying the Le Mans winner again made a strong showing: he was the fastest driver in Q1 and Q3, third in Q2 and ultimately second in the crucial shoot-out for the top grid positions. As a result, “Rocky” will start from the front row for the second time in his DTM career.

With Alexandre Prémat Audi Sport Team Phoenix managed to put both cars into the decisive qualifying segment for the first time. Although Prémat did not achieve a perfect lap, grid position four meant the best qualifying result of the year for the Frenchman.

Behind Martin Tomczyk, who finished in sixth place, Markus Winkelhock from Audi Sport Team Rosberg with a seventh-place finish at his home round managed the leap into the top ten for the first time in what has so far been a very unfortunate season for him. Miguel Molina and Oliver Jarvis on positions eight and nine completed the impressive performance of the Audi squad.

“We’re on the pole position for as much as the fifth consecutive time in this race now,” said a highly pleased Head of Audi Motorsport Dr. Wolfgang Ullrich. “This clearly demonstrates the qualities of the Audi A4 DTM. With seven cars on the top nine grid positions we have a good starting base for achieving the victory at the German finale we’re aiming for, even though different conditions have been predicted for tomorrow. Due to the different track layout good grid positions here at Hockenheim are more important than ever.”

However, Audi’s hopes of postponing the title decision were dampened on Saturday: Mattias Ekström, of all drivers, who is the only Audi racer to still have theoretical chances of winning the title, did not manage an optimal qualifying. The Swede was complaining about extreme oversteer that could not be corrected even by an unscheduled tire change. As a result, the two-time DTM Champion, who had never achieved less than a sixth place in qualifying this year, was surprisingly eliminated as early as in Q1 and will have to start into the race on Sunday from an untypical 15th place. Alongside Ekström, Katherine Legge will be on row eight as the quickest lady in the field.