Links
{{ activeItem() }}
Twitter
08/12/20
Our results from the second free practice session on the new layout here in Berlin. Getting ready for round 10 toda… https://t.co/hGjJqjn4o0
08/12/20
RT @FIAFormulaE: Free Practice 2 - LIVE from Round 10 of the 2020 #BerlinEPrix ⚡️ #ABBFormulaE #SeasonSixFinale https://t.co/kyloiXqJk2
08/12/20
Free Practice 2 in Berlin begins at 11:30 CEST. Live stream &gt;&gt; https://t.co/b3mgQNK9Q7 Live timing &gt;&gt;… https://t.co/2pQSRdb3aq
08/12/20
Team WRT will run a 3rd Audi R8 LMS with drivers @benjigoethe and Stuart Hall as a guest entry in the ADAC… https://t.co/Kki5aJUGWp
Audi Sport on Twitter
{{ activeItem() }}
Facebook
08/11/20
Victories for the Audi R8 LMS in the GT World Challenge Europe at the Misano World Circuit highlighted a weekend with wins and podiums around the world. Well done to our customers. 🇮🇹 🇩🇪 🇨🇳 🇷🇺 🇧🇪 🇿🇦 🇸🇪 🇺🇸 >> audi.com/GT3 >> audi.com/GT4 >> audi.com/TCR #PerformanceIsAnAttitude
08/10/20
Before heading to Lausitzring this weekend, let’s have a quick look back on the DTM safety measurements at the track in Nico Mueller’s latest #DriversDiary. >> audi.com/DTM #PerformanceIsAnAttitude #ThanksToDTM
08/10/20
We will be back racing at the Lausitzring for the next two weekends. Let’s have a look back on our history at the circuit. >> audi.com/DTM #PerformanceIsAnAttitude #ThanksToDTM
08/03/20
What a start to the DTM season it was for Nico Mueller! Race victory and he is currently leading the drivers’ standings. See how he experienced the weekend in his latest #DriversDiary. >> audi.com/DTM #PerformanceIsAnAttitude #ThanksToDTM
Audi Sport on Facebook 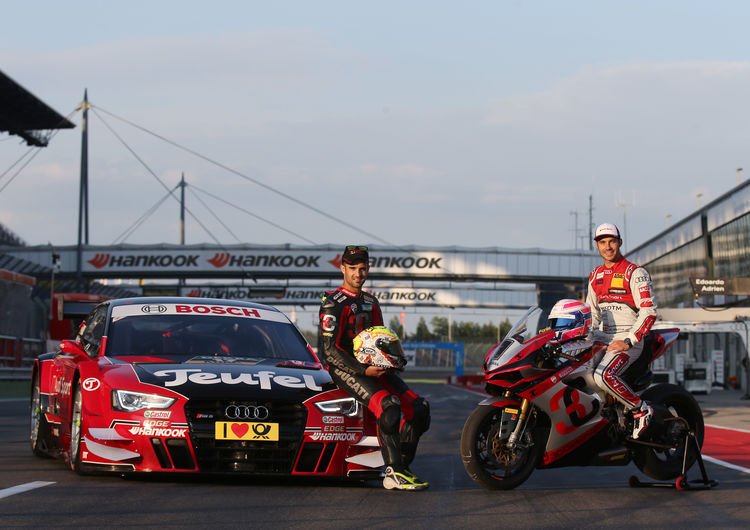 A family get-together of the fast kind: Audi DTM driver Miguel Molina and his Spanish compatriot Xavi Forés, who competes in the German motorcycle racing series IDM on a Ducati, met in the pit lane of the Lausitzring on Friday night.

Following the successful premiere last summer, the DTM weekend on the East German race track is now billed as ‘DTM meets Superbike’ for the second time. The touring car racing series and the Superbike*IDM are each holding two championship rounds at the Lausitzring. And in both racing series the Audi Group is among the principal performers. Xavi Forés on his Ducati is the reigning motorcycle champion and Audi the title defender in the DTM manufacturers’ classification. The joint race weekend offers a good opportunity to compare the near-460-hp Audi RS 5 DTM and the near-210-hp Ducati 1199 Panigale R with each other.

“A comparison of the lap times is difficult because we race on a different track configuration than the DTM,” Forés, the runner-up in the IDM overall standings, says before the race at the Lausitzring. “But I’m sure that the DTM car is faster. The Audi RS 5 DTM is a fascinating car. It’s fantastic that the fans get to see both.”

Forés met his compatriot Miguel Molina at the first joint appearance at the Lausitzring last year. “We’ve stayed in touch since then and even have the same nutrition adviser,” says Molina. “I greatly respect what Xavi does but wouldn’t necessarily want to swap with him. I definitely feel more comfortable in my Teufel Audi RS 5 DTM...”