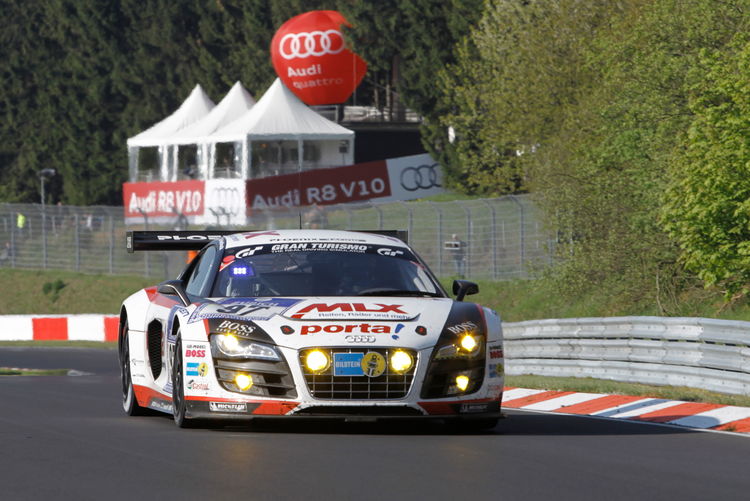 The Audi R8 LMS remains as best in class in the 24-hour race on the Nürburgring-Nordschleife: Also during its second outing in the “green hell”, the world's longest and toughest race track, the mid-engine sportscar crossed the finish line as winner of the GT3 class (SP9).

With third place overall in Phoenix Racing's Audi LMS R8 Marc Bronzel (Siek), Luca Ludwig (Roisdorf), Dennis Rostek (Porta Westfalica) and Markus Winkelhock (Berglen) presented the team with an unexpected surprise since this quartet did not even number among the favorites before the race started. The conservative and mechanically easy going driving style of the Phoenix squad, however, paid dividends: The Audi R8 LMS with start number 97 ran – apart from a small electronical problem during the opening stages – with the smallest technical problem.

Of particular note was the performance of DTM driver Markus Winkelhock, who, after only landing a drive in the Phoenix team at the last moment, drove constantly fast lap times without any experience of the Nordschleife and in the closing stages convincingly defended the class lead. “The Audi R8 LMS and this race were great fun,” beamed the Swabian following his successful Nordschleife debut. “It was a fantastic experience. My thanks go to Phoenix Racing which did a fantastic job. I'm speechless that I managed to finish on the podium here!”

Nevertheless, the 24-hour race around the Nürburgring did not run as desired for the newly opened Customer Sport Center at Audi Sport. The 38th running of the long-distance classic was plagued by numerous accidents and incidents from which none of the favorites escaped unharmed – also not the Audi customer teams ABT Sportsline, Black Falcon and Phoenix Racing which were deserted by the necessary luck during the race following the strong qualifying performance.

All three teams lost one of its Audi R8 LMS in accidents. Nordschleife typical defects on two other cars ensured that only two of the seven Audi R8 LMS competing saw the checkered flag in this unusually hard and incident packed 24-hour race.

The race on the world’s longest and toughest race track ended particularly early for the two fastest Audi R8 LMS. Both the Phoenix R8 LMS with start number 98 (Marc Basseng/Mike Rockenfeller/Frank Stippler/Hans-Joachim Stuck) and the ABT R8 LMS with start number 100 (Mattias Estkröm/Oliver Jarvis/Timo Scheider/Marco Werner) retired as early as Saturday evening due to accidents.

Shortly after 9:00 p.m. it claimed Marc Basseng (Phoenix Racing R8 LMS #98), who was running second at this time, in the track sector “Pflanzgarten 2”. “I was overtaking a slower car which had its left-turn signal blinking,” explained the Phoenix driver. “I was completely alongside him when he suddenly moved over. I wanted to avoid having an accident and swerved onto the grass, and hit a curb exactly with the centre of the car.” The impact from below was so hard that the V10 engine was damaged and the R8 LMS ground to a halt in around the “Tiergarten”.

Only about an hour bad luck also claimed Marco Werner (ABT Sportsline R8 LMS #100). The three-time Le Mans winner experienced a near identical situation in the sector “Pflanzgarten” when also running in second position. Werner was barged off by another car and had to park his R8 LMS with the rear-left suspension torn-off.

Marcel Fässler (Phoenix Racing R8 LMS #99) also had external contact on Saturday night, which fortunately ended with a damaged wheel. At 10:22 p.m. the silver-red R8 LMS took the lead for the first time and which Marcel Fässler, Frank Biela, Pierre Kaffer and Marc Hennerici temporarily extended to more than two-minutes during the night. After almost 17 hours a defect on the engine mounting also brought the race to an end for the second Phoenix-R8. “That really was a shame as we were really running strongly up to that point,” said Marcel Fässler.

Christian Abt was also involved in a collision in the second R8 LMS of the ABT Sportsline (#2) team. The result was tire failure and deranged wheel alignment. Nevertheless, on Sunday morning at 10:42 p.m. after a fantastic fight back Christian Abt, Emmanuel Collard, Lucas Luhr and Christopher Mies were once again in second place on the same lap as the then leading hybrid-Porsche, when Lucas Luhr stopped on the track around the “Pflanzgarten” with a transmission problem.

Black Falcon Racing lost one of its two Audi R8 LMS (#111) during the night because of an accident. The second R8 LMS fielded by the private team from the Eifel ran just as reliably throughout the entire 24 hours as the third Phoenix team car – apart from gearbox issues just at the end of the race.

“We are happy that the R8 LMS remains unbeaten in its class in this race,” explained Head of Audi Motorsport Dr. Wolfgang Ullrich, who was at the race himself. “We developed this car logically for customer sport, and the cars which finished third and fifth overall embody our customer sport idea perfectly. Congratulations to the Phoenix Racing and Black Falcon teams. The other cars put in great performances, but like many other top cars the extremely fast pace claimed its victims. ABT Sportsline and Phoenix Racing both lost a car when in promising positions due to accidents, which are typical on the Nordschleife. The two technical defects are also typical for this race track.”