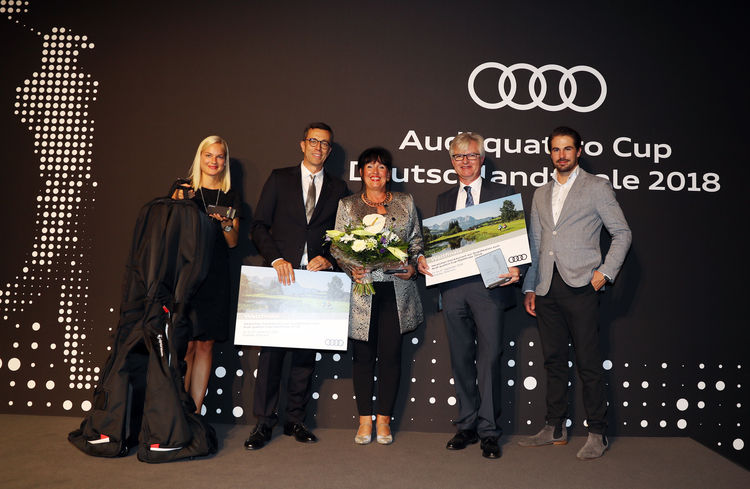 The Audi quattro Cup is the largest amateur golf tournament series in the world. The best amateur golfers in Germany competed in the national final at Berlin Scharmützelsee golf resort, where the pairings of Gudrun and Claus Molitor (GC Bensheim) and Ridvan Abay (GC Laineck-Bayreuth) / Peter Hünnighausen (GC Salzgitter) finished ahead of the field of 216 participants. This secured them the coveted tickets for the World Final, which is due to be held in Kitzbühel, Austria, from 23 to 27 September.

The Audi quattro Cup is already in its 28th year. This year, 112 qualification tournaments took place across Germany between 1 May and 19 August. After receiving invitations from Audi partners, around 11,000 amateur golfers competed in teams of two for the coveted starting positions for the Germany Final.

The final round was held at the Arnold Palmer Golf Course at Scharmützelsee near Berlin. Both of the winning teams will take part in the Audi quattro Cup World Final, which is taking place at Schwarzsee-Reith Golf Club near Kitzbühel from 23 to 27 September. The tournament participants were also competing for an Audi S5 Cabrio – the prize for a hole-in-one from the 11th tee. None of the golfers managed to ace the hole, however, so the prize was left unclaimed.

Away from the greens and fairways, host Audi organised a wide-ranging programme of events. Participants and guests were able to watch golf demonstrations, experience new Audi technologies through virtual reality, and view a selection of the premium manufacturer’s latest models. The car brand also offered a course for golf novices, and gave guests an opportunity to try out their sailing skills on the Scharmützelsee lake with top sailors Jasper Wagner and Kevin Reisenauer.

Special guests of the Audi quattro Cup Germany Final included racing driver Tom Kristensen and freestyle skier Bene Mayr. They joined Jason Lusty, AUDI AG’s Head of Marketing Germany, to hand out the prizes and they also took to the course to show off their golf skills.