Audi on second row of the grid at home round 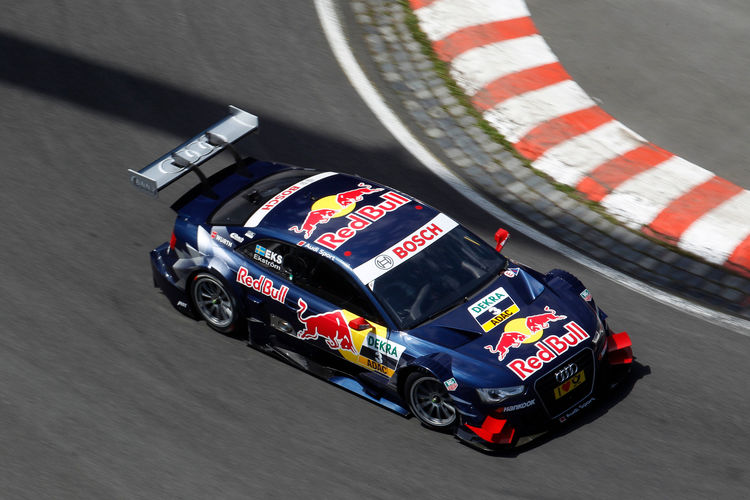 In extreme conditions, Mattias Ekström in the Red Bull Audi A5 DTM of Audi Sport Team Abt Sportsline secured grid position four for the DTM race at the Norisring (Sunday starting at 13:15 – local time – live on “Das Erste”).

As expected, the fight for the pole position on the 2.3-kilometer city street circuit between the Dutzendteich Lake and the easyCredit Stadium turned into a battle for thousandths of a second. While in the last free practice session in the morning the quickest twelve cars were within just two tenths of a second the time gaps were again minimal in qualifying in the afternoon with 35 degrees in the shade and track temperatures of more than 50 degrees.

“The conditions were definitely extreme today,” said Mattias Ekström, who from the first session on was consistently the quickest Audi driver. After best times in Q2 (48.822 seconds) and Q3 (48.861 seconds) the Swede was the last driver to go out on track in the crucial shoot-out for the pole position at which the Audi racer on used tires had to settle for position four (49.369 seconds).

“When you’re the fastest driver to go into Q4 of course it’s very disappointing to only be on grid position four in the end,” commented Ekström. “Q2 and Q3 went superbly. But in Q4 I simply didn’t have any grip in the tires. At least I’m still on the second row of the grid, so from there anything’s possible. There’s a really large crowd of Audi fans here. I owe them a fantastic fight in tomorrow’s race.”

The second-best Audi driver to start into the race will be Edoardo Mortara in his Playboy Audi A5 DTM. The Italian from Audi Sport Team Rosberg, who cheered Italy’s move in to the Euro 2012 finale at the Dutzendteich Lake on Thursday night, is on grid position ten.

After the checkered flag had dropped in Q2, Mike Rockenfeller (Schaeffler Audi A5 DTM/Audi Sport Team Phoenix) was still bumped from tenth to eleventh place. Rockenfeller, who had finished the 2012 Le Mans 24 Hours in third place, was only lacking 0.004 seconds to make it into the next qualifying session. Just a tiny bit slower were Adrien Tambay (Audi ultra A5 DTM) and Filipe Albuquerque (TV Movie Audi A5 DTM) on positions twelve and 13.

For Miguel Molina (Red Bull Audi A5 DTM), Timo Scheider (AUTO TEST Audi A5 DTM) and Rahel Frey (E-POSTBRIEF Audi A5 DTM), who were eliminated as early as in Q1 and will start from positions 20, 21 and 22, qualifying was a particular disappointment.

“After we’ve been consistently showing a solid team performance so far we unfortunately didn’t manage to do that today,” said Head of Audi Motorsport Dr. Wolfgang Ullrich. “Qualifying proved to be as close as expected. Mattias (Ekström) made it into Q4 and thus showed that we’re on the right track with the further development of our A5 DTM – because he was consistently fast here throughout the weekend. If you want to be at the very front at the Norisring you’ve got to put all three sectors together perfectly. In Q2 and Q3, Mattias managed to do that, in Q4 he didn’t. On the whole, of course we’re not satisfied to have only two cars in the top ten. But the race will be extremely hard and long – and tomorrow the weather conditions should be completely different. At this point, anything’s still possible.”

For race day, the forecast predicts temperatures to drop by around ten degrees compared to the two practice days, plus rain showers. The race covers 83 laps (190.900 kilometers) – a record distance for the DTM at the Norisring. ARD will broadcast live from Nuremberg starting at 13:15, local time. Due to the European Track & Field Championships in Helsinki the race will already start at 13:30.