Audi on second and third row of the grid in Malaysia 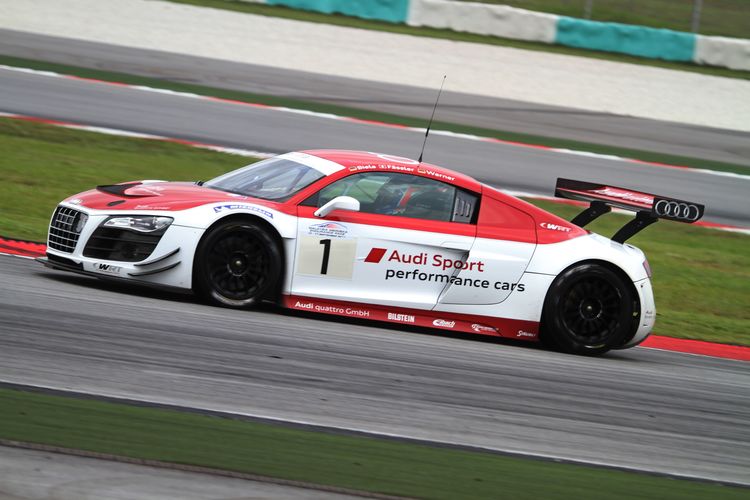 Team WRT (Belgian Audi Club) has achieved a good starting base with its two Audi R8 LMS cars for the 12-hour race at Sepang, not only due to the grid positions: Frank Biela/Marcel Fässler/Marco Werner managed to set the third-best time overall in qualifying. Their team-mates Seiji Ara/Darryl O’Young/Alex Yoong took sixth place. Prior to the race, both squads have worked out a set-up to suit the unusually tough demands of the 12-hour competition.

The qualifying format that is not used in Europe already caused a high level of suspense. Every racer drove his own qualifying session. The aggregate of the respective fastest times set by the three drivers determined the grid positions. Marcel Fässler achieved the best lap time of all six Audi drivers at 2m 05.728s. In his R8 LMS he also drove the third-best time in his session. The second-fastest lap within the Audi driver squad was achieved by his team-mate Marco Werner at noon in 2m 06.257s.

However, the work of the WRT team was centered on a much more important task. With ambient temperatures of 35 degrees centigrade and track temperatures of about 50 degrees the team had to find a set-up for the 520-HP Audi R8 LMS that is easy on the material yet allows fast lap times. The tires and brakes are considered to be under particularly high stress on the 5.543-kilometer GP circuit near the equator. By simulating various stints the squad of team director Vincent Vosse managed to find an ideal compromise for the set-up under the high thermal loads.

The 12-hour race starts on Saturday at 12:00 local time (6:00 a.m. Central European time) and lasts 12 hours. Audi fans can find links to several videos from Sepang over the weekend on www.facebook.com/AudiSport.

Frank Biela (Audi Sport performance cars R8 LMS #1): “This was not completely satisfactory. I‘d thought that a bit more would be possible. I had oversteer when turning into the corner. We tried out various things because the weather kept changing a bit. Sometimes the track was moist and had no grip and then the grip would be a bit higher again. Since Tuesday we’ve been working on a set-up that should function well across the whole distance.”

Marcel Fässler (Audi Sport performance cars R8 LMS #1): “I drove the first qualifying session today. My session was pretty good. I felt comfortable in the Audi R8 LMS. I managed a more or less flawless lap. I wasn’t one-hundred-percent satisfied with the balance of the car in qualifying but instead we should be prepared for the race even the better.”

Marco Werner (Audi Sport performance cars R8 LMS #1): “My second outing was the best one because this set of tires was perfectly heated. I really felt comfortable with it. These tires had more grip than the first set right from the beginning. I drove my best time on this set although I ran up to a car in front of me in the last turn. On the whole I’m pleased. I’ve never set such a fast lap on this circuit, neither last year nor this year. I’m well sorted for the race. And my team-mate Frank Biela worked out a good set-up for the race due to his work since Tuesday.”

Seiji Ara (MediaCorp Audi R8 LMS #2): “When I went out as the first driver of our Audi R8 LMS I had two new sets of tires available to me. On the first set the car was understeering in fast turns. Then we made a change for the second trial. The understeer was no longer as troubling as before but instead the car tended to oversteer a bit in slow turns. That’s why I wasn’t quicker. That wasn’t perfect, unfortunately. But basically the Audi R8 LMS functions very well and I’ll be giving everything in the race.”

Darryl O’Young (MediaCorp Audi R8 LMS #2): “Qualifying was okay. Unfortunately, I made a mistake on my first trial in the penultimate corner. The car was oversteering there and I lost a couple of tenths. On my second outing a car in front of me spun. Both of my best laps were about equally fast. It’s too bad that I wasn’t able to improve. Still, we’ve got a decent grid position for the race.”

Alex Yoong (MediaCorp Audi R8 LMS #2): “We’re well prepared for the race. But I can’t deny my disappointment about qualifying. All drivers of the #2 Audi R8 LMS were sure that more would have been possible today. Balance wasn’t bad but we couldn’t make perfect use of the tires. Grip was simply not good enough. Before my trial in the third session it had been raining a bit. Two days ago we were half a second faster on old tires at higher temperatures. But we’re well prepared for the race. At this event you’ve got to really make sparing use of your brakes and tires.”

Vincent Vosse (Team Director WRT): “We systematically prepared for the race and are starting from rows two and three. I’ve got to admit though that we’ve seen some really fast competitors in qualifying. Our drivers did an absolutely thorough job and continuously improved the two Audi R8 LMS cars. The car has been set up very well for the long distance. Twelve hours are a long time and a lot can happen. On Saturday it will be crucial to drive a flawless race with a homogeneous squad in the full field here.”