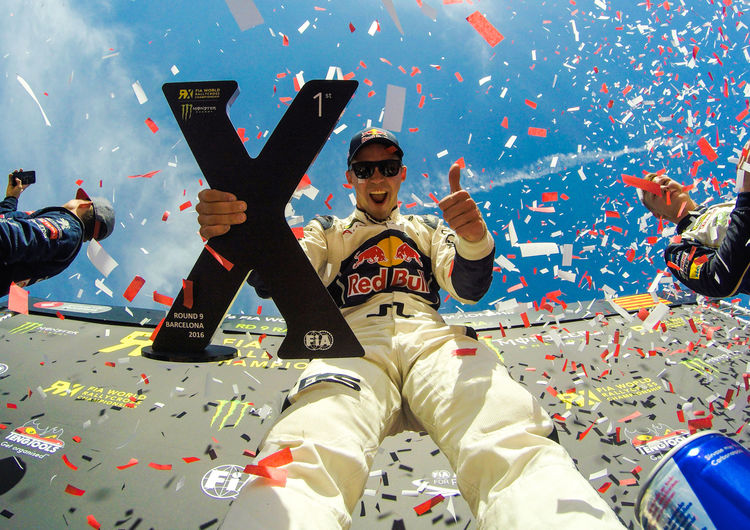 Successful race weekend for Audi DTM driver Mattias Ekström in the World Rallycross Championship: The Swede celebrated his fourth victory this season in the Audi S1 EKS RX quattro at Barcelona and took the lead of the standings. In the finale of the Blancpain GT Series Endurance Cup at the Nürburgring, Belgian Audi Club Team WRT achieved a podium place.

Mattias Ekström made an impressive comeback in the FIA World Rallycross Championship. After the Swede had forfeited his chances of victory in the past two rounds of the semi-final due to punctures, he achieved his fourth victory this season with his Team EKS at the Circuit de Barcelona-Catalunya. At the same time, the Audi driver recaptured the lead in the drivers’ world championship. After nine of twelve rounds, Ekström ranks ten points in front of the reigning world champion Petter Solberg. In the teams’ classification, EKS now has a 21-point advantage over Team Peugeot Hansen in second place. Round ten of the World Rallycross Championship will be held at Riga on October 1 and 2. Audi Sport invited Audi guests and members of the media from around the world to a special event as part of the FIA World Rallycross Championship. The visitors not only witnessed the victory clinched by Mattias Ekström and his rallycross team EKS at close range, but also test drove the Audi R8. In addition, they had the opportunity to sit in the passenger seats of the Swede and his teammate Toomas Heikkinen and experience a lap in the 560-hp Audi S1 EKS RX quattro.

A podium place was clinched by Belgian Audi Club Team WRT in the fifth and final round of the Blancpain GT Series Endurance Cup at the Nürburgring. Laurens Vanthoor, his younger brother Dries and Frédéric Vervisch took second place in the Audi R8 LMS. With a strong final sprint Laurens Vanthoor put pressure on the leading Lamborghini, but had to admit defeat with a gap of only 0.351 seconds. In the teams’ classification of the Blancpain GT Series Endurance Cup, WRT, level on points with the winners, occupied second place in the standings. In the Pro-Am category, Audi customer team I.S.R. Racing with Philippe Giauque, Henry Hassid and Franck Perera occupied third place in the race and finished the season in second place of the drivers’ standings in the Pro-Am category.

On Wednesday, before the Lone Star Le Mans weekend in Austin, there was true racing atmosphere at the local Audi dealership. A total of twelve race drivers visited the site. In addition to Audi factory drivers Marcel Fässler, André Lotterer, Benoît Tréluyer, Lucas di Grassi, Loïc Duval and Oliver Jarvis, as well as Audi ambassador Allan McNish, the drivers from the IMSA WeatherTech SportsCar Championship were hosted by Audi South Austin. Lawson Aschenbach, Matt Bell, Andrew Davies and Robin Liddell from Stevenson Motorsports, as well as Andy Lally and John Potter from Magnus Racing completed the line-up. The two American outfits are among the clients of Audi Sport customer racing. Their two Audi R8 LMS race cars were in the center of the dealership showroom and excited the guests.

Tom Kristensen had a full schedule before and during the sixth round of the FIA World Endurance Championship (WEC). Straight after his win in the Goodwood Revival in England, the nine-time Le Mans winner traveled to America. In the days prior to the WEC race, he welcomed the guests at the Primland Golf event in Virginia, which included a Driving Experience with Audi. The participants had the chance to test sporty road cars, supplied by Audi of America, on the Virginia International Raceway. As a highlight, Tom Kristensen gave various guests a ride on the track in an Audi R8 LMS ultra. The former Australian football pro, Craig Johnston, was among the thrilled guests. Thereafter, Kristensen traveled to Texas and waved the green flag for the six-hour FIA WEC race at the Circuit of the Americas.

Marcel Fässler and Benoît Tréluyer spent the time between the two FIA WEC rounds at Mexico City and Austin on the West Coast of the United States. The two Audi drivers rode from San Francisco to Los Angeles on their bicycles. They covered the 740-kilometer distance within five days. On average, they did 150 kilometers between dawn and dusk. The toughest part was a section of 184 kilometers that included an elevation gain of 2,000 meters. “The whole trip was quite a challenge, which was excellent fun,” said an enthused Benoît Tréluyer. Marcel Fässler added: “The landscape was marvelous and the ascents were demanding, but never extreme. That was good for our rhythm. The tour was simply great.”

Tom Kristensen at Race of Champions

Le Mans legend Tom Kristensen will also be contesting the next edition of the Race of Champions. The Dane starts for the 15th time in the international competition of the best racing drivers, which will be held in Miami from January 21–22, 2017. The long-standing Audi driver made it into the finale in three of his last four outings and last year he was narrowly beaten by Formula 1 World Champion Sebastian Vettel. “I’ve officially finished my career, but I’ve participated in the Race of Champions so often that this is the exception to the rule,” said Kristensen. “Two times already, my teammates and I have won the ROC Nations Cup, but I definitely still want to win the individual classification. I still enjoy racing against the young drivers a lot.”

Stefan Dreyer, Head of LMP, analyzes WEC round six at Austin and provides a prospect of the remaining three races.

Audi was absolutely competitive with both R18 cars in round six of the FIA WEC. How do you assess the race?

After Mexico, we managed to make another step forward. Both cars were in contention for victory. The drivers were immediately fast and dominated all practice and qualifying sessions as well as the early stage of the race.

Did the track conditions at Austin have anything do with this too?

The track with its 20 different turns is pretty difficult. With air temperatures of 36 degrees centigrade and 48 degrees on the tarmac, this was a tough test which the Audi R18 passed well. In the first half of the race, we achieved an advantage of about one minute. The car handles the tires really well in these conditions – we were better in that respect than the competition.

Why then wasn’t it enough in the end after all?

For the first time, with number 7, we had the misfortune of a lapping accident. Today, our pit stop performance wasn’t good enough either. We still need to analyze why number 8 had an electrical issue. That cost us 50 seconds and in the end we were lacking 23 seconds for victory. Except for that, the R18 was running very reliably in the sweltering heat. Unfortunately, we were not lucky with the yellow period once more.

What are your expectations for the remaining three races?

We showed that the Audi R18 is in contention particularly in the second half of the season. That gives us confidence for the remaining three rounds in Asia. The races have not been as thrilling as this year in a long time and we definitely still intend to win.