Links
{{ activeItem() }}
Twitter
03/08/21
Yasser Shahin &amp; Matthew Stoupas, in an @MelbPerformance-run Audi R8 LMS, finished 3rd in the 4-hr endurance race at… https://t.co/HI3sW9UzNu
03/05/21
.@abtmotorsport is returning to the @DTM in 2021 with two Audi R8 LMS entries. The driver line-up includes two Audi… https://t.co/NEgKa5fmQB
03/04/21
Wishing good luck to all of the Audi teams racing this week: 🇺🇸 @GT4America at @RaceSonoma 🇺🇸 @gt_america_ at… https://t.co/8Il0DLQdlH
03/02/21
Team Rosberg will run two Audi R8 LMS entries in the 2021 @DTM season. The team’s line-up includes Audi Sport drive… https://t.co/28Jii1M4dW
Audi Sport on Twitter
{{ activeItem() }}
Facebook
02/27/21
We are saddened to hear the news about the passing of Hannu Mikkola, a longtime friend of Audi Sport and the World Rally champion with Audi in 1983. We send our sincere condolences to his family and friends.
02/26/21
Strong pace for the Audi e-tron FE07 in Diriyah: Fourth place for René Rast and Lucas Di Grassi moved forward seven places to ninth. Both cars in the points and tomorrow we race again. >> audi.com/FormulaE #FutureIsAnAttitude #DiriyahEPrix
02/25/21
Audi Sport ABT Schaeffler in the 2021 ABB Formula E World Championship. First-ever Formula E night races coming up on Friday and Saturday at 20:03 local time (18:03 CET). Broadcast info >> fiaformulae.com/watch #FutureIsAnAttitude #DiriyahEPrix
02/24/21
Three E-Prix so far in Diriyah since 2018 with our highlight in 2019: Lucas Di Grassi on the podium with a runner-up finish. Aiming for more this week in the first two night races in ABB Formula E history, February 26–27. >> audi.com/FormulaE #FutureIsAnAttitude #DiriyahEPrix
Audi Sport on Facebook 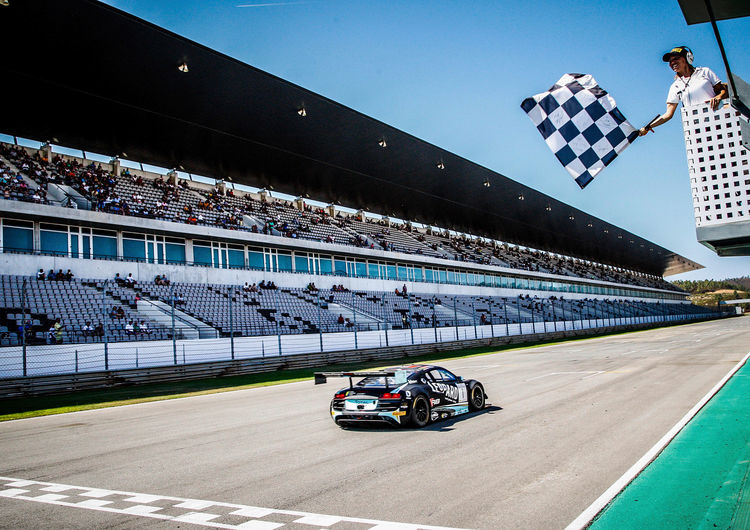 A successful weekend for Audi on and off the race track: While the GT3 customer teams collected trophies in various racing series, the factory drivers were engaged in personal activities and PR commitments.

The Audi customer teams achieved a one-two result at the fifth event of the Blancpain Sprint Series (BSS). In the main race at the Autódromo Internacional do Algarve near Portimão, Robin Frijns and Laurens Vanthoor in the Audi R8 LMS ultra of the Belgian Audi Club Team WRT had started from position two and within the one-hour event consistently went on to notch up their third victory of the season. In second place, Niki Mayr-Melnhof and Markus Winkelhock (Phoenix Racing) in another R8 LMS ultra crossed the finish line, earning the Austrian-German duo its first podium finish in this BSS season.

A change in the drivers’ standings of the Audi R8 LMS Cup: Following the fourth race weekend, Alex Yoong is the new front runner. In front of a home audience at Sepang International Circuit, the Malaysian in race one achieved his second victory of the season in front of Marchy Lee and the Swiss Rahel Frey. In race two, Lee won ahead of Congfu Cheng, Frey and Yoong. In the standings, title defender Yoong climbed from position four to the top spot. The previous leader, the Indian Aditya Patel, after a retirement and a fifth place in Malaysia, is now only in fourth place overall.

Wang extends lead of the standings with victory

Successful showing by Jerry Wang in GT Asia: The Hong Kong Chinese won the GTM class in round seven of the season at Sepang, Malaysia. Wang tackled the 3-hour event – the first endurance race in the series’ history – together with his team-mate from Audi customer team Absolute Racing, the Australian Warren Luff, from pole position. The duo in the R8 LMS spared no effort up to crossing the finish line and clinched first place in the GTM category. In the overall class standings, Wang defended his top spot.

Podium results for Christoph Dupré on the seventh race weekend of the DMV GTC. In the first of two 30-minute races on the Circuit de Spa-Francorchamps, the 42-year-old German in his Audi R8 LMS ultra of Team Dupré Motorsport had started from position six and crossed the finish line in second place. Dupré achieved the same result in race two which he started from position five. Both second places corresponded to victories in his class.

Audi customer team Twin Busch Motorsport celebrated third place in round seven of the VLN Endurance Championship Nürburgring. In the 6-hour race, Dennis Busch, Marc Busch and Marc Basseng showed an impressive recovery. After starting from position 16, the Audi R8 LMS ultra saw the checkered flag in position four and, thanks to a retroactive time penalty imposed on the third-placed Mercedes, advanced by one more position.

Audi driver Oliver Jarvis has tied the knot with his girlfriend. Chelsea de Silva and the Briton had been a couple for six years. On Friday, they got married in the Cathedral Church of the Holy and Undivided Trinity of Ely in the County of Cambridgeshire. Besides the couples’ families and friends, team-mate Lucas di Grassi attended the ceremony. Audi Sport extends best wishes to the newlyweds.

Last week, DTM driver Nico Müller visited the German finale of the Audi quattro Cup on the outskirts of Berlin. Together with Johannes Polgar from AUDI AG he presented the trophy to the winners of the golf tournament. The two winning teams prevailed against a total of 260 finalists and will travel to the world finale in Mexico at the end of November. There the overall winners of the Audi quattro Cup that celebrates its 25th season this year will be determined. The five days of the German finale at the Nick Faldo Course were not only centered on the golf ball. Instructed by professional sailors, Audi offered the participants an Audi Sailing Experience on the Scharmützelsee lake as well.

Audi Sport legend Tom Kristensen was a welcome guest at the UCI World Cycling Tour in Denmark on Thursday. In Hobro, the home town of the nine-time Le Mans winner, Kristensen opened the event as an official ambassador. Obviously, the fitness freak would not miss the opportunity to personally ride the 18.2-kilometer distance of the amateur world championships on a road bike. He covered it in 29m 52s at an average speed of 37.37 km/h.

Following Mattias Ekström and Markus Winkelhock, another Audi driver is making a foray into rallycross. Between the two DTM weekends at Oschersleben and at the Nürburgring Timo Scheider will be running as a guest in the World Rallycross Championship on September 19 and 20. At the Circuit de Catalunya near Barcelona, the two-time DTM Champion will be competing in an Audi S3 RX Supercar of the German privateer team ALL-INKL.COM Münnich Motorsport.

Hans-Joachim Stuck ‘back to the roots’

The 1990 champion is returning to the race track: Hans-Joachim Stuck will be driving the race taxi for Audi during the seventh DTM race weekend at Oschersleben. And it won’t be just any taxi, but the RS 5 DTM sporting the retro design in which Mattias Ekström contested the races at the Norisring in late June. The 25th anniversary of Audi’s first Norisring victory had been the occasion to inspire the change in livery. The driver at the wheel of the victorious V8 quattro in 1990: Hans-Joachim Stuck.

Fans of classic race cars got their money’s worth in Hamburg on the first weekend in September. Audi Sport legend Tom Kristensen entertained visitors at the Stadtpark-Revial with demo laps in the pre-war Auto Union Type D on Saturday and Sunday. The audience in the north enjoyed our show,” said the pleased nine-time Le Mans winner. “Many fans asked for autographs and were visibly impressed in personal conversations.” The line-up of the four rings was rounded off by a former Audi Sport engineer. Timo Witt drove a rally version of the Audi 80 GTE through the city park.

The Swede is leading the DTM drivers’ standings and currently has a busy schedule.

The DTM weekend in Moscow had quite a bit to offer: retirement in the first race and then your fifth podium this season, plus the lead of the drivers’ standings. How would you sum up the event?

It’s great that we’re contesting two races again on a DTM weekend this year. Following my excursion into the tire stack on Saturday, it allowed me to make up for this poor result by taking third place just a day later. The result and the lead of the standings speak for themselves, but there are still six more races coming up. The crucial part is who will be in front in the end.

Next week, you’re traveling to Oschersleben. What are your expectations?

I’m very much looking forward to the two races. In April, we did a DTM test at Oschersleben and I had a very good feeling. It’s a track where you drive a totally different set-up than in most other races – more on curbs, a little wilder, all-out attack. The complete opposite of Moscow where everything is flat and without bumps.

Your excitement notwithstanding, you have a pretty busy schedule at the moment. In addition to the DTM, commitments in the World Rallycross Championship are on your agenda. Seven consecutive weekends of racing. How do you cope with that?

Quite simply: I’m living my dream. Racing is tremendous fun for me, especially if I can do it in the DTM and in rallycross. There’s nothing better than this combination. I look forward to my little S1 in the World Rallycross Championship every time. And when I return to the DTM I notice that I keep getting better because my stress level behind the wheel is clearly lower due to my experiences from rallycross. Consequently, I can enjoy my time in the Audi RS 5 DTM a lot more and clinch better results.