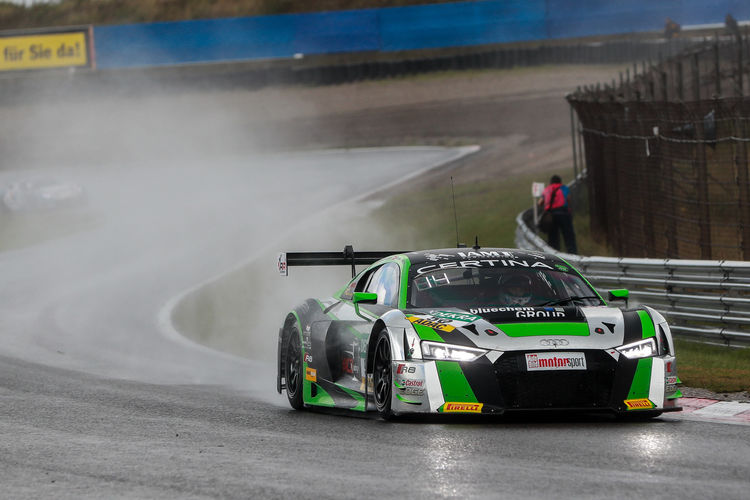 Audi customer teams celebrated a race victory and podium places in the ADAC GT Masters and the GT Asia this weekend.

A victory and a podium place were clinched by Audi customer teams on the sixth and penultimate ADAC GT Masters race weekend at Zandvoort. In changeable conditions in Sunday’s race, Philip Geipel and Rahel Frey made a clever tire choice and drove to victory in their Audi R8 LMS from the ninth row on the grid. In Saturday’s race, Christopher Mies and Connor De Phillippi in the Audi R8 LMS of Land-Motorsport had clinched second place. With a fourth place on Sunday they scored enough points for traveling to the season finale at Hockenheim as leaders of the standings with a two-point advantage.

Yoong and Au on podium in GT Asia

In round five of the GT Asia season at Shanghai, Audi customer team Phoenix Racing Asia clinched a podium success. In race one, Alex Yoong and Alex Au in the Audi R8 LMS took third place in front of their teammates Shaun Thong and Marchy Lee.

Audi WEC driver Marcel Fässler used the break between two racing commitments at the Nürburgring and in Mexico for a guest performance in his native Switzerland. In the “Bergsprint Walzenhausen” hillclimb sprint race, the three-time Le Mans winner drove an Audi quattro Group 4 for taxi rides, treating a total of 22 guests to an intensive experience of motorsport feeling.

A premiere for Le Mans legend Frank Biela: During the DTM weekend at Moscow the former DTM driver drove the latest generation of Audi’s DTM race car for the first time. In the Teufel Audi RS 5 DTM race taxi, the five-time Le Mans winner chauffeured guests around the Moscow Raceway. 25 years ago, Biela won the DTM in the Audi V8 quattro. “Being able to do a few laps in the current DTM car was really great. The leap between back then and now is truly amazing. I’d do that again anytime.”

The Audi driver about weeks with plenty of variety and the two DTM races at the Moscow Raceway.

The birth of your daughter, 24 Hours of Spa, a victory in the Audi R8 LMS Cup in Asia and the DTM in Russia – You’ve had a lot going on in your life since Zandvoort ...

First of all, the personal aspects have to be separated from working life. The birth of our daughter on July 19 was a defining moment for my wife and me. On the sporting side, I had the opportunity to drive a couple of GT races which I always enjoy a lot. In the 24-hour race at Spa, I competed for the first time. That’s a great race with a tremendous atmosphere. The team was fantastic too. My commitment in the Audi R8 LMS Cup for Phoenix Racing Asia at Sepang also went really well. So, I’ve had a good time.

Back to the DTM: why was Audi struggling so much in both qualifying sessions at the Moscow Raceway?

Honestly, I’ve always had the impression that BMW was playing with us and showed their real potential this weekend. But we also need to analyze why in qualifying – especially on Sunday – we were so far away from being in contention. We rather have to look for the problem with us than with the others.

The two races highly differed from each other, with rain on Saturday and the comeback on Sunday. Your assessment?

I think I showed a strong performance in both races. On Saturday, I should have finished a little farther in front, but I’m happy about having scored points in both races.

On Sunday, you overtook a lot of cars. What was the best overtaking maneuver?

That’s hard to say. I had a couple of good maneuvers on Saturday as well. On Sunday, it was great fun starting from the rear and advancing to sixth place.

How was the last turn from your perspective?

I tried to make up another position. Unfortunately, that didn’t work. The way Robert (Wickens) drove was very fair and I didn’t want any contact with him. In the end, we crossed the line side by side with a gap of 0.0 seconds ...

With a 30-point deficit separating you from Marco Wittmann, what’s still possible in the last six DTM races?