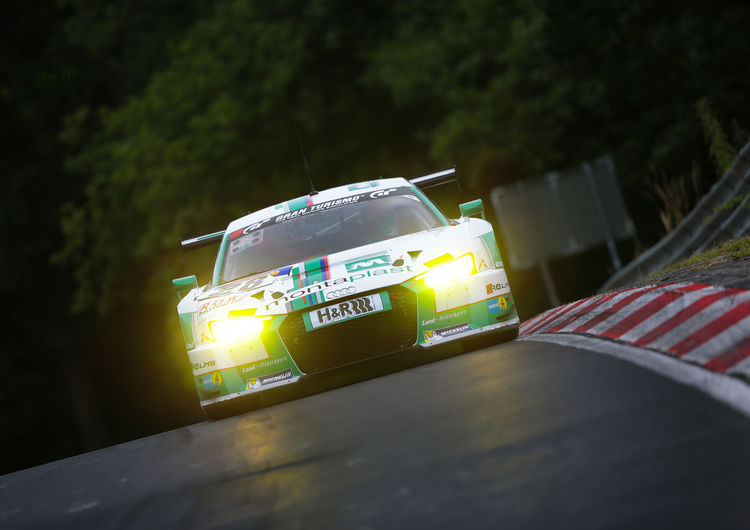 Two Audi drivers on the top of the podium: In the DTM round at Zandvoort, Jamie Green was pleased about his first victory this season in the Audi RS 5 DTM. In the VLN at the Nürburgring, Christopher Mies and Connor De Phillippi in the Audi R8 LMS achieved their second triumph for Audi’s customer team Montaplast by Land-Motorsport.

In round five of the VLN Endurance Championship Nürburgring, Christopher Mies and Connor De Phillippi celebrated their second victory this season in the Audi R8 LMS of Team Montaplast by Land-Motorsport. Mies, on posting a best time in qualifying, had previously set an unofficial new lap record. During the four-hour race, the German-American duo was consistently in the group of front runners. On the last lap, Christopher Mies captured the lead with a spectacular overtaking maneuver and crossed the finish line with an advantage of 0.602 seconds.

Countdown to the 6 Hours of Nürburgring

A few days before the only round of the FIA World Endurance Championship (WEC) in Germany at the Nürburgring, suspense is rising. Audi driver Marcel Fässler responded to questions by interested local media and motorsport journalists at a press conference hosted by the organizer in Cologne on Wednesday. In front of the near-100 meter tall “Kölntriangle” tower, a large crowd of WEC fans and photographers were pleased about the Audi R18 as a photo subject. “I’m already excited. A year ago, we had 62,000 spectators,” said Fässler. “I’m hoping for just as many fans turning out at the race track and rooting for us again this year.” On July 24, at 13:00, the battle for victory in the 6 Hours of Nürburgring will start.

Racing atmosphere in the county of Dorset in South West England: Three-time Le Mans winner Allan McNish shared his experiences and the fascination exuded by the great French 24-hour race with guests of Poole Audi. The Poole Audi dealership has showrooms for 24 new vehicles, an Audi Sport area, plus a luxurious waiting area including an Audi Lounge, fitness facility and an Audi Beauty Salon. It is the largest of 113 Audi centers in the United Kingdom. Guests attending the opening ceremony enjoyed top musical entertainment as well. The British soul singer Beverley Knight performed at the evening event.

Nine-time Le Mans winner Tom Kristensen traveled to Zandvoort for the DTM weekend. The Dane, who won the round on the Dutch dune circuit for the four rings in 2006, drove the Audi race taxi, among other things. His passengers also included the mother of Audi DTM driver Nico Müller. In addition, Kristensen, who had been knighted in his native Denmark in 2014, met with Prince Bernhard van Oranje at Zandvoort, who competed in the Audi Sport TT Cup as a guest entrant. Le Mans record winner Kristensen would not miss the opportunity either to present the trophies to the talents of the Audi one-make cup and the FIA Formula 3 European Championship after the races.

As part of the DTM events at Zandvoort Mattias Ekström and Frank Biela won two slot car races. Ekström, together with Jamie Green and Mike Rockenfeller, won a duel against the three fastest drivers from the Audi Sport TT Cup qualifying session, Nicklas Nielsen, Sheldon van der Linde and Philip Ellis. At night, Biela was victorious on the controller of a scale 1-24 Audi R8 LMS in the Audi Sport DTM Challenge, a championship round of the “big little” RCCO racing series.

Adrien Tambay had the pleasure of welcoming a special guest on the DTM weekend at Zandvoort. His French compatriot Adrien Théaux traveled to the race track in the Netherlands and paid a visit to the 25-year-old Tambay. However, the star from the Audi FIS Ski World Cup was not spending a vacation at the North Sea coast. Théaux was on the grid himself. In the Audi Sport TT Cup, the 31-year-old finished on podium in the guest entrants’ classification – thanks also to Tambay’s professional tips.

Sports medicine physician Dr. Vincenzo Tota whom Audi relies on in motorsport contested his very own race on Monday before the DTM event at Zandvoort. In a 700-hp powerboat, together with three teammates, he set a record in traveling around the southern tip of Italy in the 9-meter class. The quartet needed 32 hours, 46 minutes and 15 seconds, including a refueling stop in Roccella Ionica, for the distance from Monte Carlo to Venice. “The four of us took turns at the helm. Each shift lasted about two hours,” reported the traumatologist and surgeon. “Still, there was no way to get any sleep because those who weren’t steering had to take care of navigating the boat. An unforgettable experience. Thank you to everyone who made this possible!”

The Audi factory driver about his surprising DTM debut at Zandvoort, standing in for the injured Adrien Tambay.

When did you find out about your DTM debut?

On Saturday night, I was still celebrating my girlfriend’s 30th birthday. About nine, nine thirty, I received a call asking me if I felt like driving DTM. Obviously, I immediately accepted. Right after the call, I took off. Fortunately, I still had my helmet in the trunk of my car. Then we arrived at the hotel at about two or three in the morning.

What was your schedule on the day of the race?

My alarm clock was set for 5.45 a.m. I didn’t know the car yet. Previously, I’d only driven the Audi A4 DTM. That’s why I had to receive initial instructions – what button serves what purpose and the starting procedure used in the DTM. In addition, we made some seat adjustments. Then, when I was about to go out for the first time, I couldn’t even find first gear. Everything was happening so fast. But then the free practice session worked out after all.

What’s your assessment of your debut?

Little sleep, plenty of action and a long day with many new impressions. I learned a lot in terms of driving and technology. After only 30 minutes of free practice, it was difficult to immediately go into qualifying. But then, in the second half of the race, the penny dropped and I knew how to move the car. The times kept getting better toward the end and in the second sector, I was the fastest Audi. If I drove a DTM race again now the result might be different.

What’s next on your agenda?

Next weekend I’ll be competing in the WEC at the Nürburgring and a week later in the Spa 24 Hours.