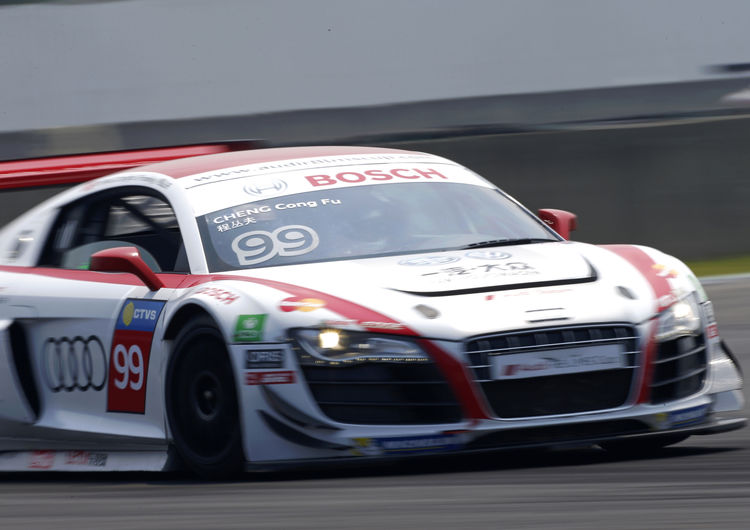 Three races, three winners: Edoardo Mortara, Franky Congfu Cheng and Thomas Fjordbach shared the victories in the third round of the Audi R8 LMS Cup season. Wildcard starter Mortara celebrated a commanding start-finish victory in the first race on the Penbay International Circuit. The DTM driver won by 1.313 seconds ahead of Cheng and Fjordbach. Although Mortara crossed the finish line first in race two, a 30-second penalty prevented the Italian from taking two wins. Benefactor was Cheng, who moved up a position and celebrated his first victory of the season. Rookie Aditya Patel and reigning Champion Alex Yoong finished behind him on the winners’ rostrum. In the third race, Thomas Fjordbach celebrated his first win. On the first lap, the rookie benefitted from the push-to-pass function and overtook pole sitter Patel. Fjordbach defended the lead all the way to the flag. Title holder Alex Yoong and Congfu Cheng followed in second and third less than one second behind. After the third of six rounds Aditya Patel is at the top of the standings. The next Audi R8 LMS Cup race weekend is held on August 8-9 in Sepang (Malaysia).

Triumphant race weekend for Sébastien Loeb Racing: the record rally World Champion’s team celebrated its first victory of the season at the fourth round of the French GT Championship. David Hallyday, Philippe Gaillard and Mike Parisy crossed the finish line first in Audi R8 LMS ultra #3 at Le Vigeant. The trio had earlier qualified on pole position for the two races.

Ekström wins again in World Rallycross Championship round in Sweden

Mattias Ekström repeated his last year’s victory in the FIA World Rallycross Championship in Sweden. At the sixth round of the season, Ekström in his Audi S1 EKS RX quattro initially finished behind compatriot Timmy Hansen in the final for the best six drivers. However, the stewards corrected the result after winners’ ceremony. In the view of the officials, Hansen had left the track in his overtaking attempt in the last corner. This is the second victory in a World Championship round for Ekström and his private Rallycross team EKS.

Winning streak over, but championship lead intact: thanks to an impressive comeback drive, Laurens Vanthoor and Robin Frijns still top the Blancpain Sprint Series standings after the fourth round of the season. After two consecutive victories, the Belgian-Dutch duo from Belgian Audi Club Team WRT had to settle for fifth place in the race at Moscow Raceway. Because of puncture in the qualifying race, Vanthoor/Frijns only started the one-hour race from 16th on the grid. Their teammates Stéphane Richelmi and Stéphane Ortelli finished fourth in the best-placed Audi R8 LMS ultra. An Audi R8 LMS ultra fielded by Phoenix Racing held second place for many laps. However, a drive through penalty, which Markus Winkelhock completed five minutes before the end of the race, threw him back in sixth place.

Audi customer team Dupré Motorsport mounted the winners’ rostrum in both races held during the fourth DMV GTC race weekend at Hockenheim. From sixth on the grid for the first race, Christoph Dupré gradually moved forward in the Audi R8 LMS ultra before finally taking third place. The Saarlander also finished third in the second race around the traditional track.

“Maximilian Stein” performed strongly during the third Spezial Tourenwagen Trophy race weekend. In the opening race, the driver fielded by Audi customer team Schütz Motorsport took second overall. In the Audi R8 LMS with start number 5, “Stein” was only 2.195 seconds behind the race winner after 16 laps. In the second race, he finished second in class. Berthold Gruhn was third in another Audi R8 LMS.

The officials and race drivers from two Audi motorsport programs appeared at Audi Brussels on Tuesday. Audi Head of Motorsport Dr. Wolfgang Ullrich, Chris Reinke, Head of LMP at Audi Sport, Romolo Liebchen, Head of Audi Sport customer racing, the three WEC drivers Marcel Fässler, André Lotterer and Benoît Tréluyer, plus Edward Sandström and Laurens Vanthoor, the winners of the Nürburgring 24 Hours, were at the event. The employees collected autographs and posed for pictures with the Audi R8 LMS and R18 e-tron quattro race cars. A tour of the factory halls provided the racers with new insights. In an entertaining interview session in the evening, the officials provided their personal assessments of current events in motorsport.

André Lotterer and Benoît Tréluyer visited the fourth round of the Red Bull Air Race that was held in Hungary. The two Audi racing drivers were amazed by the precise maneuvers that the world class pilots demonstrated over the River Danube in Budapest. The two racers were even allowed to sit in the cockpit. The three-time Le Mans winners Lotterer and Tréluyer were guests in the taxi flights and thoroughly enjoyed the spectacular aerobatics.

Audi driver Marcel Fässler had the opportunity to drive a rally race car from the 1980s in the classic event Lignières Historique on the first weekend in July. The Group B version of the Audi quattro with which the brand clinched its first world championship titles back then gave the three-time Le Mans winner a lot of pleasure. “I can only guess what the drivers were up against on the special stages back then,” said Fässler. “In any case, the first four-wheel drive Audi is still huge fun today on the circuit at Lignières.”

The Audi driver attended appointments in Brussels and Hungary and is already looking forward to the 24 Hours of Spa.

Even though the next FIA WEC race is only on the agenda in August, your calendar is full. What have you been up to this week?

On Tuesday I was at the Audi factory in Brussels in my homeland Belgium. I visited the production facilities with my team mates Marcel Fässler and Benoît Tréluyer and Audi Sport employees and saw how the Audi A1 is manufactured. There was an autograph session for the employees, and in the evening a round table that Dr. Ullrich also attended. It’s always great to feel the support given by the employees and to offer them fun and excitement through our motorsport program. Motorsport really has an established place in Audi culture.

At the weekend you were in Hungary. What was on the agenda?

I was at the Red Bull Air Race with Benoît Tréluyer. This sport is completely crazy! Aerobatics with turning loops over the Danube: this is pure acrobatics. I was even allowed to see what it’s like in such a cockpit. Similar to our taxi rides in motorsport, there are also taxi flights at the Red Bull Air Races. It’s incredible what the pilots do. And the centrifugal forces are even higher than they are in our racecar. This was an experience that I will never ever forget.

Before returning to the cockpit of your Audi R18 e-tron quattro, you drive in another race for Audi. The 24 Hours of Spa on July 25-26 are in your calendar. Is your sense of anticipation growing?

It will certainly be fantastic to drive there in the new Audi R8 LMS. I’ll be racing for Audi Sport Team Phoenix and share the car with Marcel Fässler and Mike Rockenfeller. The 24 Hours of Spa means a lot to me: the wonderful track, the world’s biggest GT3 grid, my personal relationship to the country in which I grew up, and the huge community of fans. We want to win, but we also know just how difficult this will be bearing in mind the competition. My request to the fans from Belgium and neighboring Germany: this is motorsport you can touch – come and visit us.