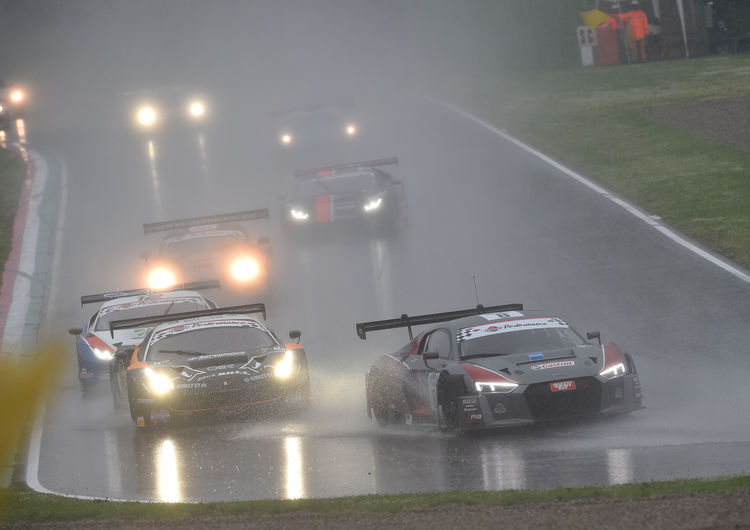 Filipe Albuquerque and Marco Mapelli celebrated their second victory of the season in the Italian GT Championship. In Australia and the United States, Audi customer teams achieved further podium places with the Audi R8 LMS. In the World Rallycross Championship, Mattias Ekström in the Audi S1 EKS RX was victorious and extended his lead of the standings.

Albuquerque and Mapelli win in Italy

Podium and victory for the Audi R8 LMS on the second weekend of the Italian GT Championship at Imola: In race one, Filipe Albuquerque and Marco Mapelli in their R8 LMS from Audi Sport Italia took third place following a puncture. Due to a rival’s exclusion from the classification, they advanced to second place. The second race was stopped after only eleven laps, due to a storm and Albuquerque and Mapelli were classified as the winners. In the GT3 category, their teammates Emanuele Zonzini and Matias Russo, who had finished the first race in third place, triumphed. In the Super GT classification, Filipe Albuquerque and Marco Mapelli will be traveling to round three at Misano in third place, trailing the leaders of the standings with a one-point deficit.

Mattias Ekström remains the dominant campaigner in the FIA World Rallycross Championship. Following his celebrated successes at the Hockenheimring and in Belgium, the Swedish Audi driver won the round in the “Home of Rallycross” at Lydden Hill in the UK. After a clear victory in the semi-final, Ekström in a dramatic final defeated reigning World Rallycross Champion Petter Solberg. The 37-year-old, after four of twelve rounds, is now leading the drivers’ classification, trailed by Solberg, with a five-point advantage. Ekström’s team, EKS, extended its lead of the teams’ standings in the World Rallycross Championship to 56 points.

Podium success in the Australian GT Championship: Steven McLaughlan and Garth Tander in an Audi R8 LMS of Audi customer team Jamec Pem Racing in race two of round four at Phillip Island advanced to second overall and to third place in the championship standings. DTM driver Miguel Molina, who competed in Down Under standing in for the current champion, Christopher Mies, experienced a difficult weekend in his second race in an Audi R8 LMS and, alongside Tony Bates in the team of Jamec Pem Racing, recorded a retirement and an eleventh place.

Kyle Marcelli on podium in the United States

Just a week after his third place in Canada, Kyle Marcelli in his Audi R8 LMS ultra finished on podium again in the Pirelli World Challenge. In rounds ten and eleven of the season at Lime Rock, the driver from the CRP Racing Audi customer team took a sseconds and a third place.

Spectators visiting Audi marveled at an unusual attraction featured at the Nürburgring 24 Hours. Parked at the entrance to the Audi Sport Hospitality was a model representing a production R8 on the passenger’s side and the R8 LMS race car on the driver’s side. The Audi R8 Transformer split lengthwise perfectly symbolizes the claim of “Born on the track. Built for the road.” The double R8 was created in a mere four weeks. Seven budding automotive mechatronics specialists from the Audi Academy Ingolstadt built the model together with their trainer, Gerald Knispel. “Our intent was to show the direct link between motorsport and production in this special exhibit,” said Chris Reinke, Head of Audi Sport customer racing. The road-going production model and the race car are produced at Audi’s Böllinger Höfe site and share 50 percent of all their components.

Audi Sport TT Cup drivers Max Hofer and Joonas Lappalainen paid a visit to Markus Winkelhock during the events of the 24-hour race at the Nürburgring. The instructor and coach from the Audi one-make cup gave the two young talents some insight into the near-580-hp Audi R8 LMS in which he contested the classic endurance race in the Eifel. Talents in the Audi Sport TT Cup aspire to a promotion to Audi’s GT program. Three drivers, Jan Kisiel (Audi R8 LMS Cup), Nicolaj Møller Madsen (Blancpain Sprint Series) and Mikaela Åhlin-Kottulinsky (ADAC GT Masters), from last year managed the leap into GT racing. The supporting program of the 24-hour race at the Nürburgring also included two rounds of the Audi Sport TT Cup.

Big family reunion on the occasion of the 24-hour race at the Nürburgring: 19-year-old Kelvin van der Linde, who is racing again in an Audi R8 LMS in the ADAC GT Masters this year, was on the grid of the iconic endurance race twice around the clock. His brother Sheldon, who is two years younger, battled for points in the overall classification of the Audi Sport TT Cup. The Audi one-make cup, which serves as an opportunity to enter the motorsport world of the brand with the four rings, was held for the first time as part of the supporting program of the 24-hour race this year. The two talents received moral support and tips from their father, Shaun, the 1994 Champion in the South African Super Touring Car Championship.

A word from ... Filipe Albuquerque

The Portuguese is contesting an ambitious GT racing program with Audi customer teams.

Your program in 2016 includes two commitments with Audi. In Italy, you immediately started the season with a victory and upped the ante on the second race weekend.

I’m happy about competing in the Blancpain GT Series Endurance Cup with Belgian Audi Club Team WRT and in the Italian GT Championship with Audi Sport Italia. The team has clearly grown since I raced for WRT a few years ago. I’m sharing the cockpit with the Brazilians Sérgio Jimenez and Rodrigo Baptista. In Emilio Radaelli’s team in Italy, I drove an Audi for the first time in 2009. In 2010, I was the championship runner-up. This season, Marco Mapelli is my teammate. Victory in the season opener at Monza was a wonderful return. Following our second and first places at Imola, we’re now in second place of the standings with a one-point deficit.

You were intimately familiar with the first generation of the Audi R8 LMS. What are the hallmarks of the second generation?

The new car is impressive. The engineers reflected about the R8 LMS in every detail and came up with many solutions that are useful, not least for the customer teams in particular. The cockpit is very ergonomic. This clearly makes the driver change between pros and gentlemen drivers easier. Due to the steering wheel and pedal adjustments, every driver can quickly and easily adjust the car to their physique. The aerodynamic downforce is impressive, too. It’s a genuine race car but we should never forget that it directly stems from the production model.

What goals have you set yourself this season?

In the Endurance Cup, I’d like to help our gentleman driver Rodrigo Baptista develop his driving skills well. The plan is for him to be in contention for podium results next year at the latest. In Italy, our objective is a different one. As our racing successes show, it’s about titles for us. Marco and I are in contention for the championship.