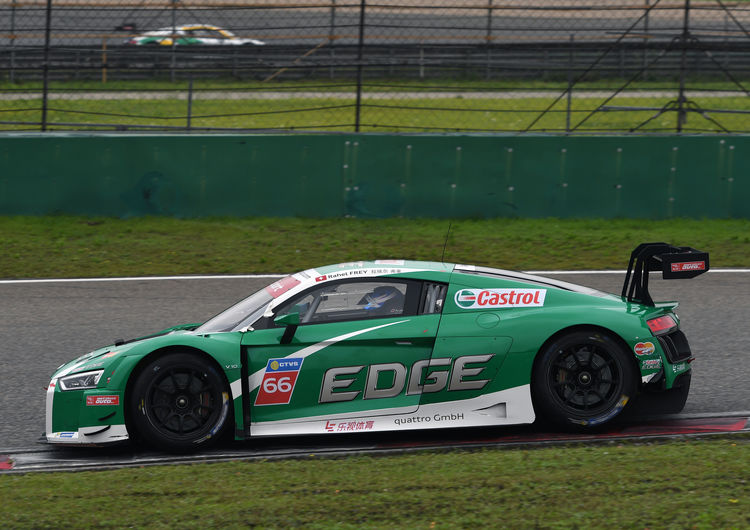 Audi R8 LMS Cup season starts in Shanghai: on the debut of the new Audi R8 LMS in the popular one-make cup in Asia, the fans witnessed a victory in the first race for junior Martin Rump ahead of veterans Marchy Lee, Rahel Frey and defending Champion Alex Yoong. In the second race, the 50th Audi R8 LMS Cup race, the Swiss lady Rahel Frey celebrated a convincing start-finish victory from pole position. Second place went to Alessio Picariello ahead of Alex Yoong. After the first of six race weekends in the championship, Rahel Frey sits atop the standings by four points from Martin Rump.

Victory in the Victorian State Circuit Racing Championship (VSCRC) in Australia for Audi customer team Jamec Pem Racing: in the second race weekend of the season at Sandown Raceway, Steven McLaughlan secured pole position in his Audi R8 LMS ultra before going on to win all three races.

Podium results at season opener in the Thailand Super Series (TSS) in Buriram (Thailand): the Australian Daniel Bilski claimed a second and a brace of third places in an Audi R8 LMS entered by B-Quik Racing.

Audi R8 LMS for the PlayStation

From the race track to the PlayStation: the racing game Gran Turismo Sport, which is available from November in stores for the PlayStation 4, was presented to the specialist press and fans in London. Gaming fans then have the opportunity to drive an Audi R8 LMS that features the livery of the 2015 Nürburgring 24 Hours race-winning car. An initial preview was given at the presentation in London, where Audi driver Kelvin van der Linde also in attendance with the Audi R8 LMS.

Four Audi DTM drivers compete this coming weekend (May 28–29) in the 24-hour race at the Nürburgring. Last year’s winner Nico Müller starts for Audi Sport Team WRT. Edoardo Mortara, second in the DTM drivers’ classification, starts in one of the Audi R8 LMS cars entered by Phoenix Racing. Team Boss Ernst Moser’s squad has already won the Eifel classic twice with Audi in 2012 and 2014. Mike Rockenfeller and Timo Scheider are not just team mates in the DTM. For the 24-hour race, they share an Audi R8 LMS from Montaplast by Land-Motorsport, which makes its debut with the four rings this year.

Miguel Molina ‘down under’ in Audi R8 LMS

Miguel Molina makes a detour to Australia between the two DTM rounds in Spielberg and at the Lausitzring: this coming weekend, the DTM driver contests two rounds of the Australian GT Championship on Philipp Island in an Audi R8 LMS. The Spaniard deputizes in the Audi customer team Jamec Pem Racing for defending Champion Christopher Mies, who is in action for Audi Sport Team WRT at the 24-hour race around the Nürburgring. For Molina it is the first journey down under and the second race in a GT3 sports car.

Audi driver Mike Rockenfeller faced an unusual challenge during the DTM event in Spielberg: Rockenfeller dared to swap between his near 460 hp Schaeffler Audi RS 5 DTM and get behind the wheel of a Steyer Daimler Puch built in 1948. In a competition with two DTM driver colleagues, ‘Rocky’ also demonstrated his abilities with the tractor. The challenge was to complete a slalom course within a specific time and afterwards to park the antiquated vehicle backwards. In the end, Rockenfeller narrowly missed taking victory.

BBQ under the bull

To mark the DTM race weekend in Spielberg, Audi invited guests once again to the BBQ beneath the Red Bull Ring’s steel trademark. Innumerable guests marveled as Dieter Gass tapped the beer keg left handed. In addition to the eight DTM drivers and their team bosses, representatives from the ITR, the Red Bull Ring management as well as international media representatives accepted the invitation from the four rings. Among the attendees were also the ARD expert Norbert Haug and a delegation from Audi Hungary.

A prominent addition: Visitors of Audi Forum Neckarsulm can now enjoy a vivid experience of the Audi Sport TT Cup race car at close range. In the cradle of premium vehicles, the Audi TT cup is one of the most recent exhibits. A contest with attractive prizes and interesting information about the “young” Audi one-make cup that entered its second season at the beginning of May complement the display of the Audi TT cup. Visitors will be able to enjoy the 310-hp racing version of the popular sports car on-site until May 28.

Lucas di Grassi maintained his Formula E championship lead with third place in his ABT Schaeffler Audi Sport team’s home race in Berlin. Before the final two races in the electric racing series, which are held in London on July 2–3, the Audi factory driver sits one point ahead of Sébastien Buemi. Di Grassi celebrated together with his team mate Daniel Abt on the podium in the heat of the German capital. The youngster scored the best result to date in his Formula E career after finishing second.

The DTM star talks about his turbulent weekend at the DTM in Spielberg and his wins in the World Rallycross Championship.

Absolutely! Sometimes a second place feels like a win. Today was such a day. The race was fantastic and was huge fun. I overtook several rivals on the track, we had the right strategy and an extremely fast pit stop – I think only 2.6 seconds! And this although my guys had worked until late in the night to give me a perfect car again after the mess in turn one yesterday.

New lap record on Saturday, a fantastic comeback drive on Sunday – why on the other hand did things not run so well in both qualifying sessions?

To be around tenth position twice in qualifying is not good enough to win races in the DTM. On Saturday I deserved the grid positon because I was simply the crucial tenth too slow. But on Sunday I was good enough be between third and fifth – and then somebody gets in my way! I’d love to banish the qualifying blues. At the Lausitzring we must try to qualify in the top five. That would already feel like a small victory because qualifying is everything in the modern DTM. On some tracks you can make up the difference in the race – assuming the fools are far enough away …

You heavily criticized some of your fellow drivers at the weekend. Why?

I get along with almost everybody on the DTM grid. But there are two or three candidates who still haven’t grasped how the DTM functions. In my opinion they cause damage and accidents in almost every race – I’m sorry for the other drivers, teams and the fans. I’m not in a position to say they don’t belong here. But their performances in the races don’t belong here. This is not what the DTM is all about. I’ve repeated myself often during this weekend: the two, three candidates are really nice people, but when they climb into a race car they are unrecognizable.

This coming weekend, you compete again in the World Rallycross Championship. With two consecutive wins most recently things are running perfectly for you, or not?

The crazy thing is that I feel completely at home in both my Red Bull Audi RS 5 DTM as well as my Audi S1 EKS RX quattro. However, in the DTM I fight in the midfield, in the World Rallycross Championship for victory. You also need a little luck in motorsport. Perhaps I had more than my fair share of luck on the first couple of weekend in rallycross and too little in the DTM. But I hope that the hard work in both series’ pays off. Anyway, giving up is not an option for me. Anybody who knows me knows this. I’ll fight until the bitter end.