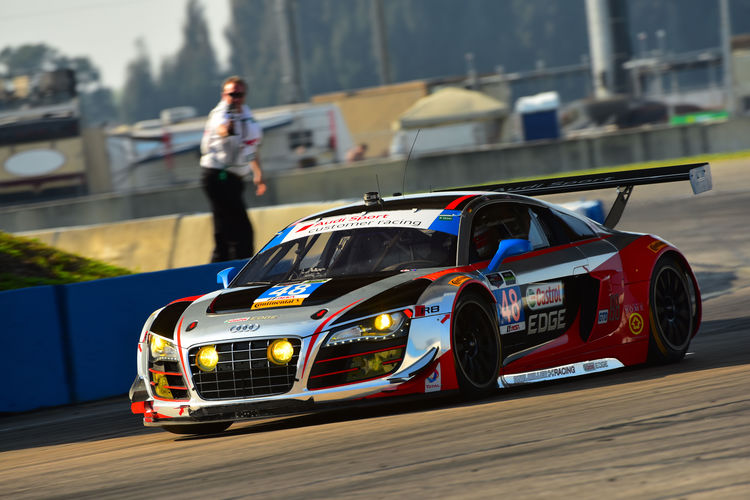 Audi was not only successful in the DTM at the Lausitzring this weekend. Audi customer teams in the USA and Spain achieved podium places as well.

Another podium for Paul Miller Racing

The Audi customer team Paul Miller Racing had a strong weekend in the TUDOR United SportsCar Championship (TUSC) by taking pole position and achieving a podium result at the Belle Isle Street Circuit in Detroit. The driving duo of Christopher Haase and Dion von Moltke piloted the #48 Audi R8 LMS to third position in the GT Daytona class and successfully defended their lead in the class standings. It was also the team’s second consecutive podium finish in the 2015 TUSC season.

AB Sport Auto on the class podium in Spain

The French Audi customer team AB Sport Auto celebrated a podium result in the 4-hour race at Motorland Aragon, round three of the V de V Endurance Series. Both of the team’s Audi R8 LMS qualified in the top three of the GTV2 class. Eric van de Vyver/Tiziano Carugati/Michel Wegelin finished the endurance race in third position in class with the #11 Audi R8 LMS, ahead of their team-mates, Franck Thybaud/Thierry Proust/Maxime Jousse in fourth.

Rahel Frey as a keynote speaker

Audi driver Rahel Frey will make a special appearance in Thun, Switzerland, on June 30. At a start-up event, the 29-year-old who competes in the Audi R8 LMS Cup and the ADAC GT Masters this season will deliver a speech on ‘team spirit.’ Interested guests can register for the public event by June 23 at www.innobe.ch.

In four weeks from now, the second in a total of six race weekends in the 2015 Audi Sport TT Cup will be held at the Norisring. Now, the registration period for the coming season has started. 165 candidates from 30 nations had applied for the inaugural season. 18 drivers had been selected for the current season in a multi-stage selection process. The registration form for the 2016 Audi Sport TT Cup is available here: www.bit.ly/TTCupApplication.

Audi factory driver Marco Bonanomi served as an instructor for the Cup vehicle from the Audi Sport TT Cup in a test at Franciacorta. The WEC driver familiarized Italian journalists with the race car from the Audi one-make cup. The participants, who were obviously excited about the 310-hp racing version of the Audi TT without exception, also included the Italian skier Giuliano Razzoli, the Olympic slalom gold medalist in the 2010 Winter Games in Vancouver.

The Lausitzring double winner and leader of the DTM standings about his perfect weekend.

Following a strong final sprint in the 2014 season and a victory in the 2015 season opener you upped the ante by two further victories at the Lausitzring. You seem to have finally arrived in the Audi family in your third year?

I’ve been feeling comfortable with the four rings for a long time, but now I’m in my second year of driving for Team Rosberg and by now I perfectly know the way it works, as well as my mechanics and engineers. In our interaction with Audi Sport, this helps to extract the optimum from the Audi RS 5 DTM and to perfectly set it up for my needs. All these are important elements of our current success.

Is the fitness program you intensified last winter another success factor?

I became not only physically fitter but also mentally stronger last winter. In addition, we spent a lot of time with the car in order to better understand it. So, one thing leads to another and suddenly you’re surfing the wave of success.

... directly headed for the Championship?

Last season, after three victories in four races, I might have answered that with a slightly hesitant ‘yes.’ But now, after four races, we’re not even close to the season’s mid-point, but still at the beginning of the year. 14 races are still open. That’s a very long road on which a lot can still happen. I’m not eying the champion’s trophy yet, but focus on the next respective race.

Like practically anyone in the DTM I’m looking forward to the season’s pinnacle event which is Audi’s home round as well. However, following the triumphs in recent weeks, we’re traveling there with a lot of success weight on board of our Audi cars. But that won’t keep us from giving everything to clinch another success.