Links
{{ activeItem() }}
Twitter
08/14/20
K-pop star Mark Lee from the group @SuperM just revealed his favorite car: the #Audi #Q8 in black. Good choice!… https://t.co/76FEj55IDi
08/14/20
The new #Audi #S3 Sedan looks particularly sporty with its dynamic #design and S-specific elements. What is your fa… https://t.co/ac80AI9yCj
08/14/20
RT @audisport: MEDIAINFO: Strong end to the season for Audi Sport ABT Schaeffler in Formula E &gt;&gt; https://t.co/We6YUrlfOm #PerformanceIsA…
08/13/20
Investing in a sustainable #future: Efficient #production processes and #recycling cycles help us achieve our… https://t.co/PsNA5EJS8F
Audi on Twitter
08/14/20
Today it was time to hit the track again with @DTM. Catch up with the track action &amp; current championship leader… https://t.co/yeT1wujqhu
08/14/20
Back on track with @DTM this weekend. High-resolution pictures are available in the Audi MediaCenter. &gt;&gt;… https://t.co/sSTATeUDTH
08/14/20
The first day at the @Lausitzring_de comes to an end. These are our results from the second free practice. &gt;&gt;… https://t.co/1q30sqG0Jt
08/14/20
A perfect Friday for @DTM leader @nico_mueller who sets the fastest time also in Free Practice 2. &gt;&gt;… https://t.co/DvpogYY378
Audi Sport on Twitter
{{ activeItem() }}
Facebook
08/14/20
Today it was time to hit the track again with DTM. Catch up with the track action and current championship leader Nico Mueller after today’s practice sessions at the Lausitzring. >> audi.com/DTM #PerformanceIsAnAttitude #ThanksToDTM
08/14/20
Back on track this weekend. >> audi.com/DTM #PerformanceIsAnAttitude #ThanksToDTM
08/11/20
Victories for the Audi R8 LMS in the GT World Challenge Europe at the Misano World Circuit highlighted a weekend with wins and podiums around the world. Well done to our customers. 🇮🇹 🇩🇪 🇨🇳 🇷🇺 🇧🇪 🇿🇦 🇸🇪 🇺🇸 >> audi.com/GT3 >> audi.com/GT4 >> audi.com/TCR #PerformanceIsAnAttitude
08/10/20
Before heading to Lausitzring this weekend, let’s have a quick look back on the DTM safety measurements at the track in Nico Mueller’s latest #DriversDiary. >> audi.com/DTM #PerformanceIsAnAttitude #ThanksToDTM
Audi Sport on Facebook 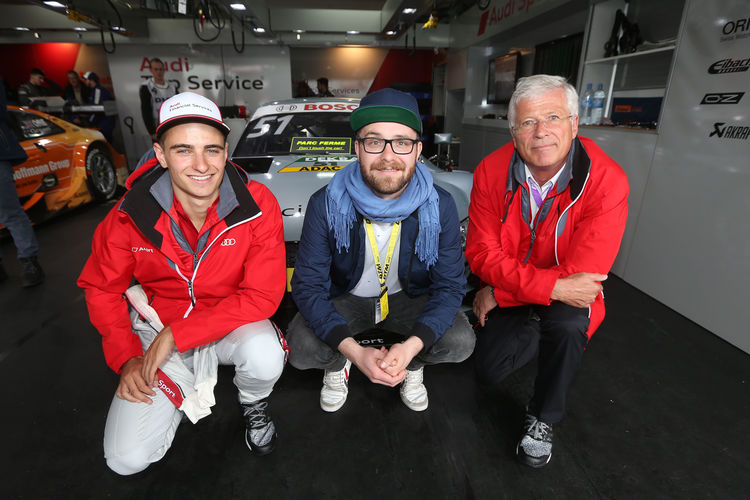 Not only thousands of thrilled fans witnessed Audi’s victories in the WEC and the DTM at Spa and at the Hockenheimring this weekend. Prominent guests – including athletes and musicians – were guests of Audi and watched the events with bated breath in the pits as well.

Welcome instead of ‘Au revoir:’ Before chart breaker Mark Forster performed his top hit on the ARD stage at the Hockenheimring for the DTM fans, Audi driver Nico Müller welcomed him to his garage in the pit lane. The Swiss racing pro and Arno Zensen, Team Director of Audi Sport Team Rosberg, showed the Audi RS 5 DTM to the interested musician. Afterwards, Forster, who has gathered some initial cockpit experience in Stefan Raab’s ‘Stock Car Crash Challenge,’ was convinced: ‘I’ll be back and then I’d also like to go for a ride in the DTM race taxi. Unfortunately, it wasn’t possible this time due to the tight schedule.”

Six weeks before the beginning of the 2015 DTM season, Timo Scheider successfully tackled what is arguably the world‘s toughest mountain bike stage race – the 740-kilometer Cape Epic Race in South Africa – together with the Bulls Racing Team. His fellow mountain bikers wouldn’t miss the opportunity of keeping their fingers crossed for Scheider on location on the weekend of the DTM season opener at Hockenheim. The group included the German world-class riders Karl Platt, Stefan Sahm and Tim Böhme, as well as team boss Friedemann Schmude. Needless to say, Scheider also presented his four-wheeled equipment, the AUTO TEST Audi RS 5 DTM, to the pros of the two-wheeled racing scene on the occasion of their visit.

Audi welcomed Belgian guests from GT racing at round two of the FIA World Endurance Championship (WEC) at Spa. Vincent Vosse, Team Director of the Belgian Audi Club Team WRT, who covers the race as a commentator for the Belgian TV channel RTBF, watched the qualifying session in the Audi pits. Laurens Vanthoor, the 2014 Champion of the Blancpain GT Series in an Audi R8 LMS ultra, visited Audi Sport at Spa too. Charles-Henri Bonnet, the Chairman of the Belgian Audi Club, attended the 6-hour race as well.

Audi Sport customer racing welcomes a new squad in the United States that has opted for the R8 LMS. Team C360 R (Compass360 Racing) is entering the Tudor United SportsCar Challenge with the GTD version of the race car. Team boss Karl Thomson relies on the driver pairing Ray Mason/Pierre Kleinubing. Initially, the four rounds at Lime Rock, Road America, Virginia and Austin between July and September are on the team’s calendar. In addition, starts in the endurance races at Watkins Glen and Road Atlanta are being planned.

A word from ... Head of Audi Motorsport Dr. Wolfgang Ullrich

The Head of Audi Motorsport about the successful racing weekend with victories in the WEC at Spa, the DTM at Hockenheim and the world premiere of the Audi Sport TT Cup.

Following the victories in the WEC at Spa and in the DTM at Hockenheim would it be fair to call this a perfect weekend for Audi Sport?

This has been a unique weekend for Audi Sport. Three races in our two main programs, WEC and DTM, falling on a single weekend is special in itself and being able to win all three of them is something that even formally can’t be topped. This is even more significant when it’s the first race weekend of a championship like the DTM and the second important race before Le Mans in the WEC. It shows the squad that the hard work it did over the winter went in the right direction. These victories are a sweet reward. I’d like to sincerely thank everyone at Audi Sport and the teams that have made this possible.

How great was the strain in the past weeks?

It really was absolutely at the stress limit. But everyone consistently gave 100 percent. Together, we managed to do things that we might not have thought to be possible at all. But in the end they were possible – that speaks for this team. These victories are tremendous motivation for everyone because in racing it’s about being in front, and we are in front, both in the WEC and the DTM, after this weekend.

Spa was an important ‘dress rehearsal’ for the Le Mans 24 Hours. With regard to the next few weeks, what’s your feeling?

There’s still a lot of work to be done for Le Mans. After Silverstone and Spa, we’ve still got a few items that we need to and want to improve. And we don’t have a lot of time left. This means we’re continuing to move on full-speed, starting on Monday. We still need to check off a few things on our list to have the cars at Le Mans that will be in contention for victory, that work impeccably, that provide the drivers with the kind of handling that makes them feel comfortable in the car for a longer period of time and that are capable of delivering consistently high performance. And of course we’ve still got a huge amount of work to do with respect to spare parts supply and preparation of the Le Mans cars.

At Hockenheim, the Audi Sport TT Cup celebrated a much-noted premiere – was this a success as well?

I take my hat off to what’s been achieved there in such a short time. The Audi Sport TT Cup immediately showed on its first weekend that it’s got incredible potential. All the cars worked superbly. The drivers are thrilled by the TT. Racing with these cars is fun. I also believe that the selection of the drivers for the cup has been very successful – we could see that in the races. In the Audi Sport TT Cup, we’ve got a good very good base for promoting young talent within the Volkswagen Group and within Audi.