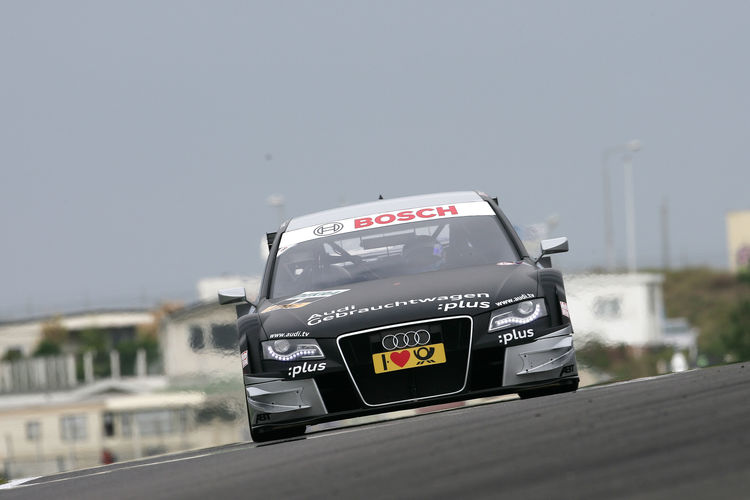 Audi has made up ground to the leader of the standings at the DTM race at Zandvoort like the brand had been hoping to do. Still, the sixth round of the season did not go according to expectations for the title defenders.

Similar to the race at the Nürburgring two weeks ago, the first few meters were crucial again. The quickest in qualifying, Timo Scheider, stalled the engine of his Audi A4 DTM and dropped to tenth place. With a bold recovery and a good strategy the reigning champion then pushed forward again to third place. However, the distance to Gary Paffett and Paul Di Resta at the front of the field had become too large by that time.

“I’ll clearly take responsibility for the mistake at the start,” said the Audi driver, who was obviously upset about the incident. “The first response was good. But then there was too much grip which is why I stalled the engine. At least I managed to clinch my first podium in the end. Still, I’m really angry because the car was perfect.”

As in qualifying, Scheider was the quickest driver on the demanding circuit at Zandvoort in the race too, posting by far the fastest race lap of 1m 32.967s. “But this alone is not enough,” commented Head of Audi Motorsport Dr. Wolfgang Ullrich. “If you want to win in the DTM, everything’s got to fit perfectly. And unfortunately that wasn’t the case today. Timo (Scheider) has the reputation of making excellent starts in the DTM. That such a mishap would happen to him of all people fits the way our season has gone so far. But we’ll continue to fight; we won’t give up and we’ll dig ourselves out of this hole. We again saw today that the performance of our cars is good.”

Timo Scheider managed to make up ground in the standings to the leader, Bruno Spengler, as did Mattias Ekström, who occupied fourth place and thus reduced his gap from 19 to 16 points. 50 points are yet to be awarded in the remaining five races.

With Miguel Molina, Oliver Jarvis and Martin Tomczyk on positions five, six and eight Audi Sport Team Abt Sportsline managed the feat of scoring points with all five vehicles – with four of them crossing the finish line in front of the leader of the standings, Bruno Spengler, thanks to a perfect strategy.

Martin Tomczyk, as well, had the chance to overtake Spengler in the final phase but was bumped in the rear by Ralf Schumacher just before the end of the race and thus lost the chance to stay on the heels of the Canadian.

Mike Rockenfeller (Audi Sport Team Phoenix) was running in front of Spengler, in seventh place, before his left rear wheel was touched by Spengler, which caused him to spin. “I can’t understand the fact that he wasn’t punished for this,” said the upset Le Mans winner who finished 13th after the incident.

His Phoenix team colleague Alexandre Prémat received a drive-through penalty for jump starting. From the last position, the Frenchman still managed to improve to eleventh place. Markus Winkelhock (Audi Sport Team Rosberg) was unable to compete due to a defect of the prop shaft that had occurred during the info laps before the race. His team colleague Katherine Legge in 14th place won the ladies duel against Susie Stoddart.