Audi in the role of the hunter at the Norisring

{{ activeItem() }}
Twitter
08/14/20
RT @audisport: MEDIAINFO: Strong end to the season for Audi Sport ABT Schaeffler in Formula E &gt;&gt; https://t.co/We6YUrlfOm #PerformanceIsA…
08/13/20
Investing in a sustainable #future: Efficient #production processes and #recycling cycles help us achieve our… https://t.co/PsNA5EJS8F
08/12/20
#WhatsUpAudi on a secret mission: Discover the process behind the #Audi camouflage #design and how it sets the tone… https://t.co/4989jovfiy
08/12/20
quattro and #etron – a powerful combination of high #performance and notable economy. The #electric #quattro in the… https://t.co/MRA8Tq17uv
Audi on Twitter
YouTube
08/12/20 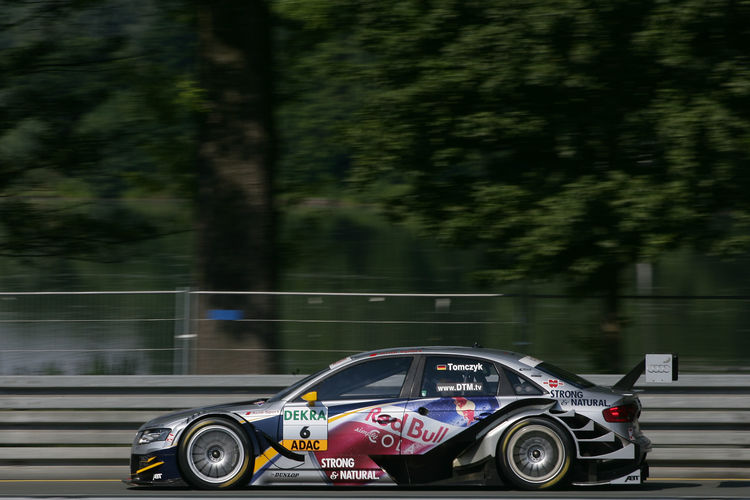 Audi will start into Sunday’s DTM race at the Norisring in the role of the hunter. On the so far hottest day of the year Martin Tomczyk, Mattias Ekström and Oliver Jarvis (all from Audi Sport Team Abt Sportsline) clinched grid positions four, five and six for Audi.

The merely 2.3-kilometer city street circuit between the Dutzendteich lake and the Frankenstadion sports arena has always been difficult territory for the Audi A4 DTM. And this time again the Audi drivers are facing an extremely demanding task. “Unfortunately, we didn’t manage to work out a better starting base for the race,” commented Head of Audi Motorsport Dr. Wolfgang Ullrich after the qualifying sessions. “At the Norisring, simply everything has got to perfectly fit together – and that wasn’t the case with us today. But everything is still possible from rows two and three on the grid.”

After posting the fastest times in both free practice sessions the Audi drivers suggested the potential of the Audi A4 DTM at the Norisring in qualifying as well. Mattias Ekström at 48.334s managed to set the absolutely fastest time of the whole qualifying in the second segment (Q2). Posting a time of 48.379s, Martin Tomczyk in second place in Q3 was just a blink slower. But at the crucial moment neither of the two Audi drivers managed to repeat his performance.

Mattias Ekström came into the pits in Q3 sure of not being able to further improve his time and having made it into Q4. But the Swede was relegated to fifth place and missed Q4 by just 40 thousandths of a second. Martin Tomczyk was the only Audi driver to manage the leap into the top four but touched the wall at the exit of the S-Corner after a strong first sector. “I was surprised that my rear tires had absolutely no grip,” said Tomczyk. “But considering that I’ve always had a rough time at the Norisring it was nice to even make it into Q4 at all. So far the weekend’s been going pretty well for me.”

Tomczyk will tackle the 82-lap race from row two, spearheading the Audi squad. Immediately behind him two other Audi drivers, Mattias Ekström and Oliver Jarvis, are lying in wait. With Timo Scheider on position ten, all four Audi A4 DTM cars of Audi Sport Team Abt Sportsline are starting from top 10 positions.

Katherine Legge, who managed to drive the fastest race lap at the Norisring last year, missed qualifying for Q2 by a mere 16 thousandths of a second. Le Mans winner Mike Rockenfeller and DTM rookie Miguel Molina had to settle for grid positions 16 and 18.

Considering the fact that the entire field in Q1 was lying within just 516 thousandths of a second in Q1 even the drivers on the rear rows of the grid can expect to have chances and the fans can look forward to a particularly gripping race. “At Le Mans I learned that one must never give up,” said Mike Rockenfeller. “And for tomorrow thunderstorms have been predicted, which might change the whole situation again.”