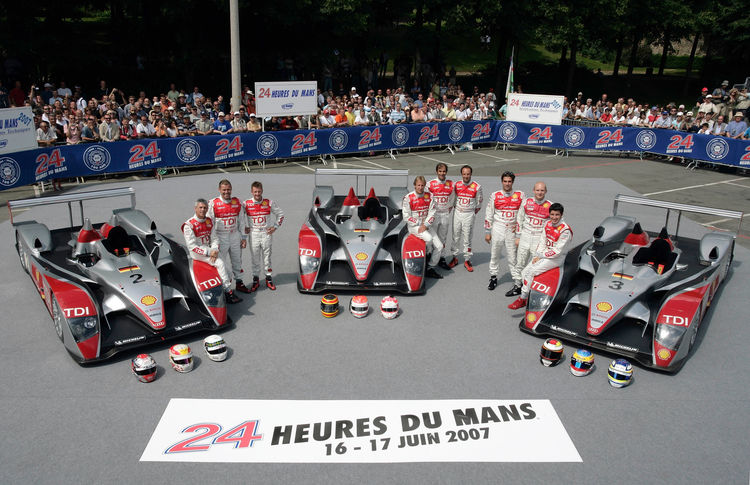 On 16/17 June 2007 AUDI AG will again tackle one of motorsport’s biggest challenges of all: With three prototypes, Audi Sport Team Joest will be contesting the 24 Hours of Le Mans, the world’s most demanding car race that will be staged for the 75th time this year.

Since 2000, Audi has been the brand to be beaten at Le Mans. Five victories with the Audi R8 that became a legend in its own time were followed by the historic first triumph of a diesel sportscar – the Audi R10 TDI – in its Le Mans début in June 2006.

Despite modified regulations, which prescribe tanks for diesel cars this year that are ten percent smaller than those of prototypes powered by petrol engines, the squad of Audi Head of Motorsport Dr Wolfgang Ullrich is banking again on the performance capabilities and the reliability of Audi TDI Power in the French endurance classic. For the first time, the Audi R10 TDI will have to compete against another diesel sportscar: the Peugeot 908.

Audi’s opponent Peugeot is a manufacturer who has been successful in various motorsport categories and is a very strong competitor. However, as a pioneer of diesel technology, Audi has an advantage in terms of experience, which includes Le Mans, and Audi Sport Team Joest intends to translate this advantage into the seventh Le Mans victory for Audi.

For the first time since 2002, AUDI AG is fielding three factory cars in the 24 Hours of Le Mans again. Taking turns at the wheel of the third R10 TDI will be three young drivers who normally contest the DTM for Audi: Lucas Luhr (Germany), Alexandre Prémat (France) and Mike Rockenfeller (Germany).

The cockpits of the other two R10 TDI cars will be occupied by six veterans, who – between them – have scored a total of 20 Le Mans victories. They include Le Mans record winner Tom Kristensen (Denmark), who will be celebrating a comeback after his serious accident in the DTM race at Hockenheim.

The first serious session at Le Mans will be the first qualifying at 7 p.m. (local time) on Wednesday. The race will start at 3 p.m. on Saturday. Worldwide, the “race of the year” will be broadcast on TV in more than 100 countries.

Dr Wolfgang Ullrich (Head of Audi Motorsport): “The race at Le Mans always poses a new challenge because it is completely different and new every year. With Peugeot competing against us, we have a new, strong rival with a motorsport track record consistently marked by a high level of professionalism and success, who has already won twice at Le Mans. On the test day, Peugeot was roughly on a par with us, but the other LM P1 cars should not be underestimated either. Nevertheless, our goal is clear: We want to clinch the seventh Le Mans victory for Audi and demonstrate that TDI Power is the best technology and we have a great and well-proven team.”

Frank Biela (Audi R10 TDI #1): “Of course you approach such a race with high expectations, particularly with our track record: Audi, Biela, Pirro, Werner – with names like these, the goals can only be very ambitious. But we all know that it’s anything but easy to actually bring home a Le Mans victory.”

Emanuele Pirro (Audi R10 TDI #1): “Wish number 1 is to finish the race on the podium – as I always managed to do in the past eight years. Wish number 2 would be to win the race again. We put in several months of very hard work for this weekend and are well prepared. I’m looking forward to the race as well as to this new challenge with Peugeot.”

Marco Werner (Audi R10 TDI #1): “As last year’s winner we are, no doubt, one of the favourites. But I think that we’ll be seeing a very tough race this year. There are three Audis competing and with Peugeot entering, we’ve got a serious rival. That’s good for the sport, though, and makes the whole thing interesting. But it won’t be easy for us.”

Dindo Capello (Audi R10 TDI #2): “It’s hard to believe how quickly the past twelve months passed. It seems to me as though we were here at Le Mans making our début with the Audi R10 TDI only yesterday. Now we’ve got twelve more months of experience. The engineers from Audi Sport worked hard to improve the things that weren’t perfect yet in 2006. I’m convinced that Audi is going to show the strength of the R10 TDI, our team and our drivers here.”

Tom Kristensen (Audi R10 TDI #2): “After having to miss the test day because of my accident in the DTM, I’m approaching the 24 Hours of Le Mans this year somewhat differently than in previous years. My attitude is the same, but by teammates Dindo (Capello) and Allan (McNish) have done the preliminary work. I know that I can rely on them and look forward to competing with them again at Le Mans. I feel fit and hope that we’ll be able to drive a fantastic race.”

Allan McNish (Audi R10 TDI #2): “Le Mans is a race that’s very difficult to win. I managed to do it once, albeit not yet with Audi. My goal, therefore, is victory number two. I prepared myself exactly the same way as I did in previous years. The team is very well prepared too. We had a very good endurance test and many exploits in America. That Tom (Kristensen) is fit again makes the whole thing perfect for Dindo (Capello) and for me.”

Lucas Luhr (Audi R10 TDI #3): “I can hardly wait for the race to start. I’m looking forward to it immensely. The Audi R10 TDI is huge fun to drive. Of course Le Mans is strenuous with an LM P1 sportscar on account of the high speeds. But the R10 TDI is a very good-natured car. You get used to it quickly. I still need to find the rhythm in traffic. The difference in speed to the GT cars is enormous at times. You get the impression as though they are just parked. But you get used to this.”

Alexandre Prémat (Audi R10 TDI #3): “I always wanted to compete at Le Mans, now this dream has come true, and that’s a great feeling. We had a good test day. Lucas (Luhr) and I have a similar driving style, which is very good. I also get along very well with ‘Rocky‘. I’m sure that we, the three rookies, can stand our ground in the race. We just have to keep from making any mistakes.”

Mike Rockenfeller (Audi R10 TDI #3): “The test day confirmed what I had expected after the test at Paul Ricard: The Audi R10 TDI is very pleasant to drive at Le Mans as well. Of course we still need to optimise the fine-tuning for the race a bit, but I’m confident as far as that’s concerned. Of course everyone at Audi expects a victory in the 24 Hours of Le Mans. And if it works out that way it will be a particular thrill to be the driver sitting in the winning car. But that’s something you can’t plan for. I believe we’ve got the speed. Everything else remains to be seen.”

Ralf Jüttner (Technical Director Audi Sport Team Joest): “Needless to say we want to repeat last year’s success. We have one more car in the race than in 2006. Three cars mean a higher workload as well as higher chances. This year, we’ve got even stronger rivals than before: Pescarolo has built a new car, and Zytek, as well, was very good in the tests, and of course there’s Peugeot with the new diesel. They won the first two races they contested. The cars are fast. That will be a difficult challenge for us. But we’re hoping to be able to make good use of our advantage in experience and that all three cars will be running without any problems.”