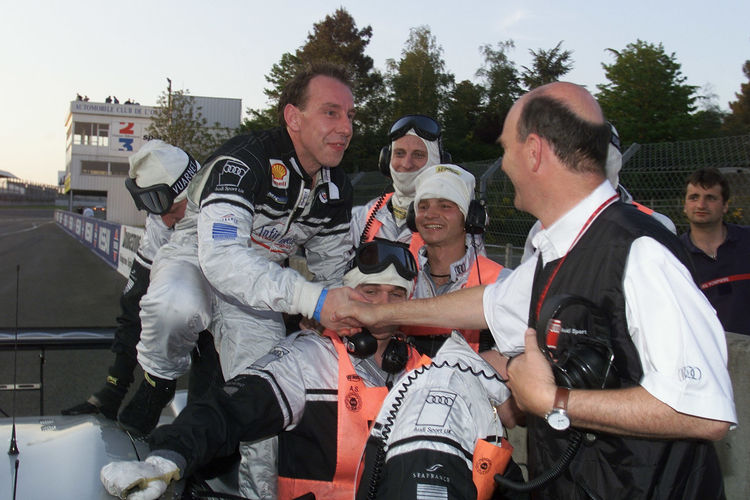 Michele Alboreto sharing with Capello was also impressive in the R8R in preparation for the world’s toughest and most gruelling motor race.

The later trials which continued until early evening and also basked in very warm sunshine saw Emanuele Pirro set the overall fastest Audi lap of the day. His 3:36.390 (226.341kph) in the second “open” R8R was the seventh quickest time in the second session and over five seconds under the existing lap record. Pirro shared his Audi Sport Team Joest car with fellow ex-multiple Audi touring car champion Frank Biela.

But while the Audi R8R was always amongst the fastest Le Mans Prototype cars, it was not so easy for Audi Sport UK’s “closed” R8C sportscar which race in the GT Prototype category. Stéphane Ortelli finished 10th fastest in his R8C in the morning session. The 1998 Le Mans 24 Hour winner sharing with Didier Theys plus Stefan Johansson who did not drive, set a time of 3:43.786 late on in the time trials.

Ortelli said: “I set my quickest lap despite having to lift due to a yellow flag incident. I’m obviously delighted.”

Meanwhile Andy Wallace had to rely on setting a time with just two minutes of the six hour trial remaining in the Audi Sport UK run R8C. The Briton was classified 13th on a 3:48.406 while James Weaver and Perry McCarthy were left to spectate.

Wallace remarked: “I never want to go through anything like that again. We now know where we must improve and we have data to work from.”

Audi’s Head of Sport Dr Wolfgang Ullrich, said: “To qualify was our main aim. With the R8R, we managed many laps which for newcomers like us, is very important. The R8C was a little too exciting for me. But we have not tested so much with this car and we’ll do our best to make up for this in the coming weeks.”