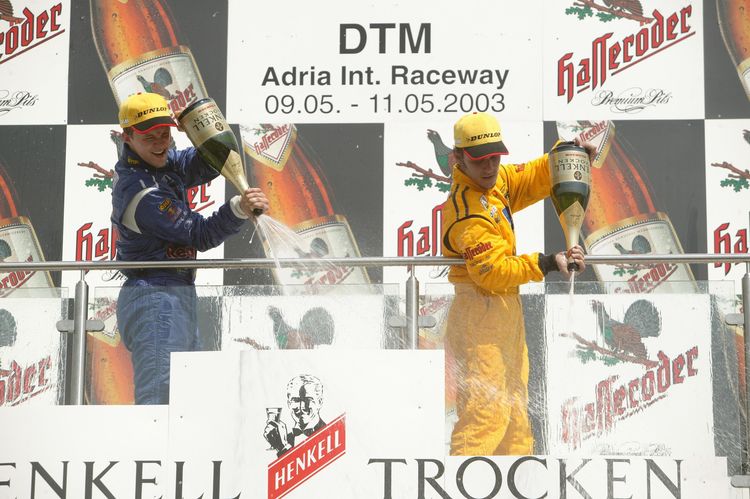 The Audi drivers, Mattias Ekström (Sweden) and Laurent Aiello (France) were the leading stars during the second round of the 2003 DTM at the Adria International Raceway close to Venice (Italy). Their impressive overtaking manoeuvres, which are considered to be particularly difficult on the tight and twisty 2.702 kilometre circuit thrilled the spectators. After 47 hard fought laps both Audi drivers mounted the winners rostrum.

In the closing stages of the thrilling race, the tandem of Ekström and Aiello spectacularly fought their way up to second and third places in their Abt-Audi TT-R’s. Initially, as double pack they caught and passed the former DTM champion Bernd Schneider, before team colleague Marcel Fässler fell victim to a Swedish-French one-two. “To overtake an opponent two at a time doesn’t happen so often, however, today we succeeded in doing so twice,” said a pleased Laurent Aiello.

On Saturday, the titleholder just failed to qualify for the top ten ‘single lap’ qualifying run (“Super Pole”) and had to start the race from eleventh position. During the first pit stop he lost five seconds after stalling the engine when pulling away. That Aiello was nevertheless able to finish third speaks volumes for the Frenchman’s fighting spirit and stamina, and for the technical qualities of the new generation Abt-Audi TT-R.

“The car was fantastic, we could drive consistently quick lap times,” said Ekström. “The decision to make the second pit stop relatively late was absolutely right. Even at the end of the race the tyres were still very good, and, as a result, we were able to attack.” At the start, with temperatures in the shade approaching 30 degrees Celsius and more than 60 degrees in the cockpit, Ekström fell back to seventh place. At the chequered flag he had overtaken, including his team colleague Laurent Aiello, every opponent apart from Christijan Albers.

Audi Junior Peter Terting, at 19 years of age the youngest driver in DTM history, finished a faultless race in 13th position. “Although I can hardly stand up, I’m really satisfied,” mentioned the youngster after the heat of battle on the Adria. “For a novice, who stepped up from the VW Lupo Cup, a 13th place is really okay.”

His team colleague in the S line Audi Junior Team, Martin Tomczyk, was again the victim of bad luck. After the start, the 21-year old from Rosenheim was the best-placed Audi driver, and even led briefly. However, because of a braking problem he was forced to retire early.