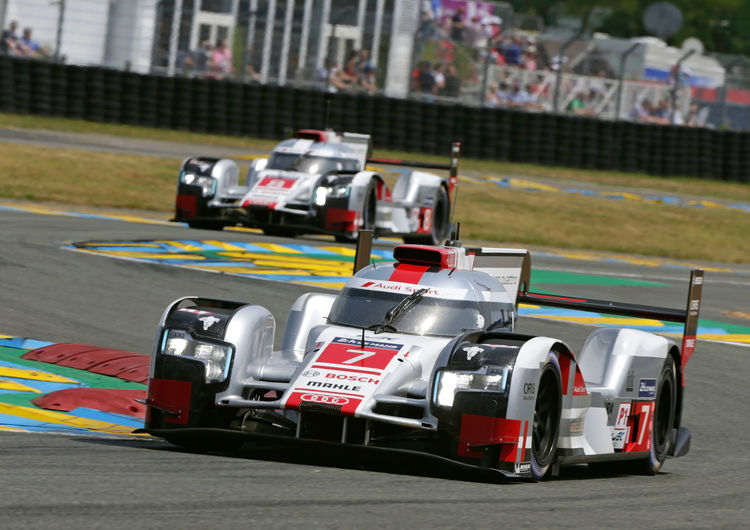 The Audi drivers will be entering round four of the FIA World Endurance Championship (WEC) as leaders of the standings after the summer break. Following two victories and another podium result, Marcel Fässler/André Lotterer/Benoît Tréluyer (CH/D/F) are traveling to Audi’s home round at the Nürburgring with a 20-point advantage.

In what has been its most thrilling season so far, the FIA World Endurance Championship that was launched four years ago will be competing in front of a German audience for the first time. The leaders of the standings and their Audi team-mates Lucas di Grassi/Loïc Duval/Oliver Jarvis (BR/F/GB) will be racing together with 29 other teams on the Grand Prix circuit of the Nürburgring. Audi Sport prepared for this new track in a test at the end of July, which included testing based on the new rating provided for by the regulations.

Throughout the six-hour race, the crowd can expect to see a balanced competition starting at 13.00 on Sunday. The race at the Nürburgring might prove as thrilling as the season opener when Audi decided the round at Silverstone in its favor with a 4.6-second advantage following a nail-biting battle. Subsequently, in Belgium, the victorious Audi trio was separated by its closest rivals by just 13.4 seconds. After the fast tracks at the beginning of the season, Audi is now competing on a semi-fast track in the Eifel. Extremely slow track sections driven at only around 70 km/h are contrasted by others where speeds may exceed 290 km/h.

The race in Germany rings in the decisive stage of the FIA World Endurance Championship (WEC). Within the space of twelve weeks, the remaining five races will be held in Europe, North America and Asia. The best drivers can score a maximum of 130 points in them until the end of November.

Currently, the tally of the leaders, Fässler/Lotterer/Tréluyer, reflects 80 points. In the manufacturers’ classification, Audi is still in contention as well. As the runner-up in the standings, the brand with the four rings is trailing the leader with a deficit of only 16 points, while 220 points are yet to be awarded. This year, Audi is battling for its third World Championship title in both the drivers’ and manufacturers’ classification of the FIA WEC.

From round four of the season in the Eifel onwards, new technical ratings that were determined based on the actual data from Le Mans will apply. They allocate slightly more fuel energy per lap to the Audi R18 e-tron quattro hybrid race car (plus 0.4 percent). At the same time, the competition has to manage a reduction in gasoline consumption (minus 1.7 to 2.2 percent). The officials have reduced the fuel tank capacity of the race cars as well. “This will result in minor shifts,” says Chris Reinke, Head of LMP at Audi Sport. “The differences between the technological concepts in the field are now more precisely compensated for. This will have effects on the lap times of all the participants, but possibly also on how many laps we can complete between two pit stops.”

In addition to the new rating of the race cars, a special provision in the tire regulations will be applied at the Nürburgring as the track is new on the calendar. Eight tire sets will be available to the manufacturers for each car in qualifying and the race – compared to only six for most of the other six-hour races. Consequently, the teams may also change tires during each refueling stop.

The TV channel Eurosport will cover the crucial stage of the race at the Nürburgring, with live 75-minute coverage starting at 18.00 (CEST). RTL will broadcast a summary of the 6-hour race on September 5, starting at 13.35.