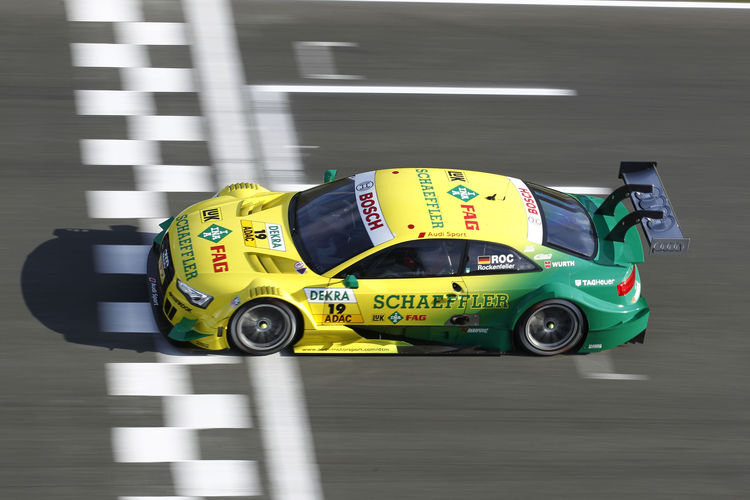 Motorsport fans are in for a thrilling weekend on the Dutch North Sea Coast. Audi driver Mike Rockenfeller is traveling to round nine of the DTM at Zandvoort (September 27 to 29) with an advantage of 33 points and can thus secure an early win of the first DTM title in his career at the season’s penultimate round.

Eight drivers, one opinion: Zandvoort is one of the absolutely favorite tracks of the Audi drivers due to the circuit’s characteristics with hilltops, fast turns and several overtaking opportunities plus the unique location in the dunes directly on the Dutch North Sea Coast. The statistics confirm the positive feeling of the drivers. There is no other track on the race calendar that Audi has been more successful on ever since the DTM’s comeback in 2000 than Zandvoort. Seven times a driver of the four rings was on the top of the podium, with Mattias Ekström, who has a total of three victories in the Netherlands under his belt, heading the list.

This year, the eyes of the motorsport fans are focused on the duel of Mike Rockenfeller vs. BMW driver Augusto Farfus, the only remaining rival in the battle for the Championship. The Audi driver is traveling to Zandvoort with a 33-point advantage and, in case of taking victory or second place, would be determined early as the new DTM Champion. Augusto Farfus has to shorten the gap to the German to a maximum of 25 points to still have a chance of claiming the title in the finale at Hockenheim on October 20.

In addition to leader of the standings Mike Rockenfeller, his brand colleagues Mattias Ekström, Tom Kristensen and Edoardo Mortara have previously entered their names on the winners’ list at this race track. The former Audi driver Laurent Aiello celebrated his early title win at Zandvoort in 2002. The two-time DTM Champion Timo Scheider started here from the pole position four times, although he has been deprived of a victory so far.

The 4.307-kilometer circuit is located around 45 minutes from Amsterdam, has been on the race calendar every year since 2001 and is considered one of the most challenging tracks of the season in terms of driving skills. Fine sand from the dunes often makes the tarmac extremely slippery off the racing line. Particularly the start-finish straight lends itself to the use of the Drag Reduction System (DRS) with which the drivers flatten the rear wing angle by pushing a button on the steering wheel. But Mattias Ekström sees a possibility in the fast combination following turn three as well: “If the system can be used there, it’lll be the most thrilling DRS section of the whole year.”

Tickets for all DTM races of the 2013 season are available at www.audi-motorsport.com/dtm. In many countries of the world fans can watch qualifying and the race live on the DTM’s YouTube channel at www.youtube.com/dtmint.

Dieter Gass (Head of DTM): “According to past experience Zandvoort is good territory for us. Although the season has shown that the relative strengths from the previous year don’t necessarily have to apply we’re still traveling with optimism to the penultimate race of the season. At Oschersleben, we saw how a solid team performance is reflected in the various classifications of the DTM. Consequently, a good team result is again our aim at Zandvoort.”

Hans-Jürgen Abt (Team Director Audi Sport Team Abt Sportsline): “Our team has special memories of Zandvoort. On September 29, 2002, in other words exactly eleven years ago, we won our first DTM title there with Laurent Aiello. This year, Mike (Rockenfeller) is battling for the Championship. We’re going to give everything to support him in this. And the best way to do that is by scoring as many points as possible.”

Ernst Moser (Team Director Audi Sport Team Phoenix): “Zandvoort is one of our favorite tracks. With Mike (Rockenfeller) at the front and a good position in the team classification we’ve got our sights set on two titles. Maybe we can lock it all in right here on the North Sea Coast.”

Arno Zensen (Team Director Audi Sport Team Rosberg): “After the result at Oschersleben, we’re traveling to Zandvoort with confidence. Filipe (Albuquerque) has finally shaken off his misfortune – that’s what we’d like to build on.”

Filipe Albuquerque (28/P), Audi Financial Services RS 5 DTM #6 (Audi Sport Team Rosberg)
• Scored his first points of the 2013 season at Oschersleben
•  In fourth place, just barely missed the podium
“I’ve always been fast at Zandvoort so far but have never been able to clinch a real result. For my team and me, things are going better and better, which gives me motivation for the next two races. The podium continues to be my aim.”

Mattias Ekström (35/S), Red Bull Audi RS 5 DTM #11 (Audi Sport Team Abt Sportsline)
•  Celebrated his first DTM victory at Zandvoort on September29
•  Won the race at Zandvoort three times and was on the podium eight times
“Thinking about the track at Zandvoort immediately puts me in a good mood. I really like driving there. In addition, I’ve got many positive experiences, for instance my first victory many years ago. In the race back then, a brand colleague celebrated his Champion’s title at the same time – that would be a nice combination this year again.”

Jamie Green (31/GB), Red Bull Audi RS 5 DTM #12 (Audi Sport Team Abt Sportsline)
•  Was on the podium at Oschersleben for the first time as an Audi driver
•  Has scored points in 56 percent of his previous DTM races
“Zandvoort is one of the fastest tracks on the calendar where you can make really good use of the RS 5 DTM’s aerodynamics. There aren’t many circuits with such characteristics, so I particularly look forward to his race every year.”

Miguel Molina (24/E), Audi RS 5 DTM #20 (Audi Sport Team Phoenix)
•  Has scored points in the past two races of the season
•  Together with Mike Rockenfeller is battling for victory in the team classification
“Zandvoort is a great place. I’ve got fond memories of the track because that’s where I managed the leap into the last qualifying segment for the first time. I’d like to continue the upward trend of the past few races.”

Edoardo Mortara (26/F/I), Playboy Audi RS 5 DTM #5 (Audi Sport Team Rosberg)
•  Won the race at Zandvoort last year
•  Achieved his second-best result of the season at Oschersleben
“After the relatively decent race at Oschersleben, I’m hoping for us to make the next step at Zandvoort and to finally put the streak of misfortune behind us. I won at Zandvoort in 2012 and have often raced there at other events as well. Now we’ve got to manage a flawless weekend and then we’ll achieve better results again too.”

Mike Rockenfeller (29/D), Schaeffler Audi RS 5 DTM #19 (Audi Sport Team Phoenix)
•  Is the only driver in the field to have scored in all of the 2013 races
•  Is starting the penultimate race of the season with an advantage of 33 points
“Zandvoort is my favorite track. I’m looking forward to the race with huge anticipation and would obviously like to win the Championship there as well. Although you can’t force that to happen we know it works: We’ve got to do our job with high concentration and then see if that’s enough or not. If it isn’t, then we’ll just be experiencing a hot finale at Hockenheim. But with Zandvoort being such a great track, which also suits us well, I‘m traveling to the North Sea coast with guarded optimism.”

Timo Scheider (34/D), AUTO TEST Audi RS 5 DTM #23 (Audi Sport Team Abt)
•  Has started from the pole position an amazing four times at Zandvoort
•  Has finished in the top five five times in the Netherlands
“I’ve got so many memories of Zandvoort. For instance, I’ve clinched four pole positions there – but not a single victory. That’s quite a bit of unfinished business for me. It would be nice to finish it this year with the positive momentum from Oschersleben. I’m very much looking forward to Zandvoort because it’s my absolutely favorite track.”

Adrien Tambay (22/F), Audi ultra RS 5 DTM #24 (Audi Sport Team Abt)
•  In fifth place, scored his first DTM points last year
•  Most recently, finished in the points three times in succession in the 2013 season
“At Zandvoort, I took my first-ever DTM points last year, so I’m pleased to return to this venue. I’ve finished in the top ten three consecutive times most recently and want to continue this string at all cost in Holland.”

All Zandvoort winners since 2001

39,000 spectators saw a spectacular DTM race in extremely difficult conditions. Rain showers from the nearby North Sea kept sweeping across the race track that was never wet enough though to switch to rain tires. In a tough duel, Edoardo Mortara prevailed against Mike Rockenfeller, who had taken the lead at the start and commandingly controlled the race for a long time. The Audi one-two-three win was perfected by Mattias Ekström. Across several laps, the Swede fought a thrilling duel with Mercedes driver Gary Paffett which he, not least thanks to a good strategy and quick pit stops by his team, decided in his favor.

Adrien Tambay about Zandvoort: “In Formula 3, I had some problems at Zandvoort, so I arrived there with mixed feelings last year. But in the end, things went well for me. In a hard race, I was able able to keep Bruno Spengler and Martin Tomczyk behind me and score my first points. That was a great relief for me and like a small breakthrough in the DTM. In the Audi RS 5 DTM, the track at Zandvoort is really good fun. I think everybody knows the Tarzan corner at the end of the start-finish straight. It’s cool too. But my favorite section is the fast downhill double right-hand turn at the end of the track. This sector is extremely fast and very bumpy. You drive at the limit and get adrenalin surges. I like that! I suppose the old, long track must have been similar. I’ve watched onboard footage of my father – very impressive but dangerous as well …”