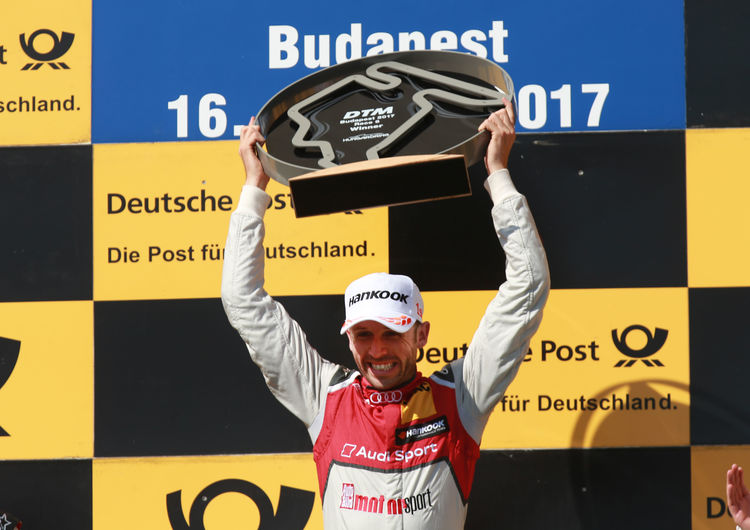 Audi driver René Rast is the man of the hour in the DTM. The newcomer celebrated his first DTM victory at the Hungaroring and on pulling off a mega weekend even snatched the lead of the drivers’ standings. In the manufacturers’ and teams’ classifications, Audi is in front as well before its home round at the Norisring on July 1/2.

Following his first DTM pole position on Saturday, the 30-year-old, on delivering a perfect lap, again scored three additional points for the top spot on Sunday’s grid. And this time, everything went perfectly according to plan in the race as well. Straight from the start, the German from Audi Sport Team Rosberg took the lead and went on to continually extend it. After pitting on lap eleven, Rast initially dropped behind his brand colleague Mattias Ekström from Audi Sport Team Abt Sportsline, who had changed tires as early as on lap three. In the final stage, Rast was able to use the advantage of fresher tires to overtake Ekström. With that, Rast achieved his first victory in his ninth DTM race.

“Having won at the Hungaroring is an incredible feeling,” René Rast said after his maiden victory. “Twice on pole, my first win, plus the championship lead – I can’t even find words for all this. In a rookie season, you can’t expect leading the championship after three race weekends and already having won your first race. I’m simply happy about being backed by such a good team.”

Mattias Ekström, on clinching second place, improved to position four in the standings. The Swede had planned to work on his qualifying performance and on both days scored an additional point for grid position three. In total, Ekström collected 30 points in Hungary and on Sunday set the fastest race lap as well.

Ekström’s teammate Nico Müller, like the day before, started from position four and also finished fourth. The young Swiss was closely following BMW driver Maxine Martin nearly throughout the race, but was not able to overtake him.

A performance marked by a fighting spirit was shown by Jamie Green who, due to a slow pit stop, dropped to position nine some of the time. The Briton subsequently made up several places. Cheered on by the Hungarian crowd, he even overtook the BMW of the reigning DTM Champion Marco Wittmann on the outside. Green finished the race in position five and, after six races, in third place of the standings, is trailing his teammate René Rast by merely five points and Lucas Auer (Mercedes-Benz) by four.

The unluckiest driver of the day was Mike Rockenfeller. Shortly before the start of the race, leakage was detected on a brake line of his Audi RS 5 DTM, forcing Rockenfeller to start from the rear of the field instead of from grid position five. With a lightning start, early pit stop and fast lap times, Rockenfeller managed to battle his way forward from 18th to tenth place and score a point for Audi Sport Team Phoenix. His teammate Loïc Duval was brushed by BMW driver Tom Blomqvist and dropped to position 16 as a result of the subsequent spin.

Audi scored 70 of the 107 possible points on Sunday, now clearly leading the manufacturers’ classification. In the teams’ classification, Audi Sport Team Rosberg has extended its advantage to 39 points. Consequently, to the delight of Head of Audi Motorsport Dieter Gass, Audi is going to travel to its “home round” in Nuremberg as the leader of all three classifications. “Obviously, today’s race was fantastic for us,” said Gass. “After what was an extremely disappointing Saturday for us, it was important for us today to strike back, clinch a one-two victory, plus positions four and five. I’m incredibly happy for René Rast: he’s been delivering an awesome debut season in the DTM.”