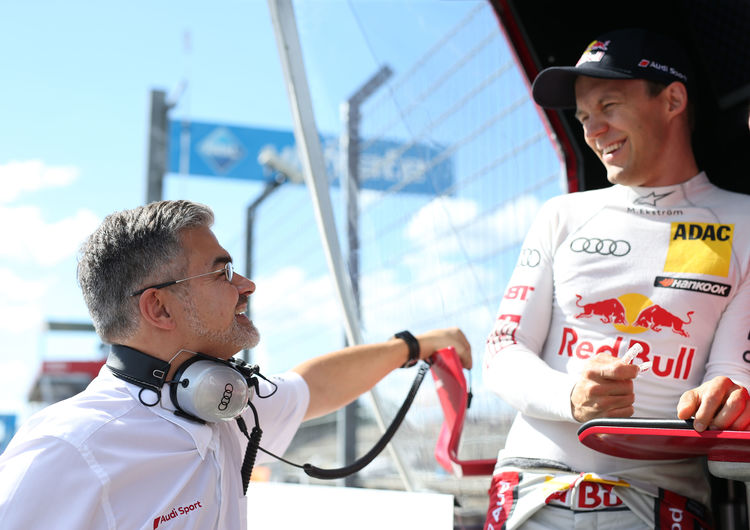 Mattias Ekström will be traveling to the next two races in Moscow on July 22/23 as the leader of the DTM standings. The Audi driver in a brief interview.

Once again, the Norisring victory you’ve been longing to clinch didn’t work out. Are you happy with the weekend anyhow?
Mattias Ekström: “Absolutely. I had two entertaining races with many good points and the lead of the standings. On Saturday, I was on podium and just barely missed it on Sunday. So, it was definitely a good weekend.”

How painful was having to pass up racing at your home round in the World Rallycross Championship in Höljes?
“Well, I can’t split myself in half. My boss (Dieter Gass) decided that I should race at the Norisring, and that was a good choice. I really have a chance of clinching my third DTM title. Last year, I was allowed to skip the DTM finale and took the rallycross title. Maybe this year it’ll work the other way around.”

So, how good are your chances?
“Very good. We have a fast car that’s been working well on all tracks so far. The point gaps are still very small, but the circle of title candidates is shrinking with every weekend. I’m hoping to be part of this circle up until the last weekend and in contention for the title.”

Did you keep track of how things were going for your EKS team in Höljes?
“Of course. I followed the live timing on my smartphone and stayed up to speed via WhatsApp and my phone. Plus, I obviously watched live streaming of the finale. It’s a shame that no Audi was in it. That has to change again at the next round in Canada. We’re working on a few updates on the car.”

Before that, the next two DTM races are coming up in Moscow. Are you looking forward to them?
“Okay, I’m not a great Russia fan. I dread the trip every year. But the track is great. I have good and bad memories of Moscow. I hope that this time they’ll be good ones again. We should be very strong there, so it’ll be an important weekend in the title race. It marks the season’s midpoint.”

Qualifying wasn’t one of your fortes for a long time but, most recently, things have been going clearly better. What’s the reason?
“It’s common knowledge that I’m not as rough on the tires as other drivers. That’s an advantage for me in the race, but a disadvantage in qualifying. We’ve made some changes to the set-up in order to do better in qualifying. That worked out pretty well at the Norisring.”

In the race on Sunday, you were only 0.002 seconds short of clinching a podium …
“Yes, that was even closer than in the 2014 World RX at the Estering when Petter (Solberg) beat me by five thousandths. I was the front runner at the event, but the transponder in my S1 was installed further toward the rear than on his car. Maybe we need to check that on my DTM car too … But seriously, Edo was really a few centimeters ahead. No matter what, I do feel like he does: it was a very cool finish.”

Starting at the Norisring, communications between the pit crew and the driver have been limited even further. How was that for you?
I had the feeling that everyone went for all-out attack – and that’s the way it should be. Both races were very entertaining. As a fan, I’d definitely turn my TV set on again for the Moscow round and hope that coverage will be aired up until the end.”

Marco Wittmann called you “unfair” after the race. How do you feel about that?
“I’m keeping my cool.”