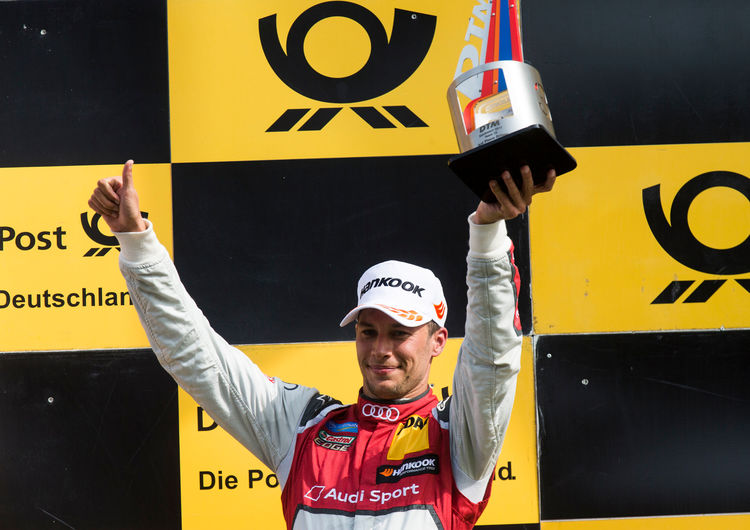 Loïc Duval has just celebrated his first DTM podium. In Zandvoort, he finished second behind his teammate Mike Rockenfeller. During the race, however, the DTM rookie was not aware that he would clinch his best result. Duval takes a look back in a short interview.

At Zandvoort, you celebrated your first podium finish in the DTM. Did you realize that you were in such a good position during the race?
Loïc Duval: “To be honest, no I didn’t. After a weak qualifying I had started from 13th on the grid. Then, after many of my opponents pitted early, I had a clear track and drove a fairly lonely race.”

In lap 14 you took the lead after your teammate Mike Rockenfeller headed to the pit.
“That was a really great feeling, but I knew that Marco Wittman and Mike still remained in the ‘virtual’ lead. They then began to narrow the gap to me more and more, eventually catching me up shortly before my pit-stop.”

After the stop, you remained in third place. Did you know at this point that you were in a position to get your first DTM podium?
“No, not at all. In the cockpit we are shown all of our positions, but I was so sure that I had fallen back down the field that I didn’t even pay attention to the display. It was only when I crossed the finish line that my race engineer Mathieu (Le Nail) shouted the good news over the radio.”

It was your first DTM podium in your first DTM season. How did it feel to stand up there?
“I have driven for Audi Sport since 2012 and have celebrated a lot of success in the WEC. But to drive to the podium as a rookie in a new racing series was something really special – a terrific moment for me. Not least because I was able to celebrate it together with ‘Rocky’ as well.”

You have now driven twelve races in the DTM. How do you see your learning curve?
“Of course it’s been extremely steep. Even though I’ve been an Audi factory driver for several years already, the DTM is something completely different in comparison to the WEC. The competition between the drivers, the teams and the manufacturers is extremely tough – even more so than I had actually expected. As well as it being my first season, my race engineer also had no experience in the DTM. In Budapest, however, we started to see a trend that was clearly heading in the right direction. Hopefully we can continue the momentum from Zandvoort into the next race weekend at the Nürburgring.”

The round at the Nürburgring on September 9 and 10 is the home race for your teammate Mike Rockenfeller and Audi Sport Team Phoenix. Will this be a special weekend for you?
“First of all, I’m really looking forward to the Nürburgring, because it’s a great race track. And of course, I want to collect some more good results. When you taste the champagne once, you simply want more. It won’t be easy, but my aim is to keep racing further towards the front and score points for my team and my manufacturer, so that in the end Audi Sport can clinch all three titles.”