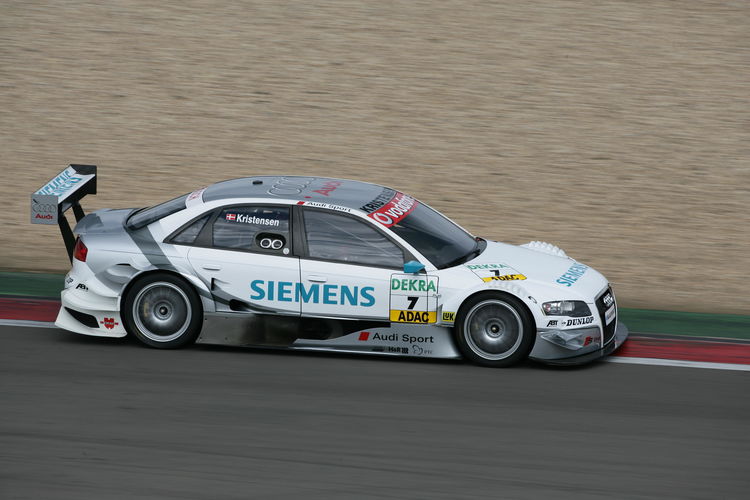 Le Mans record winner Tom Kristensen in his Siemens Audi A4 DTM will start from the firont row of the grid in the sixth round of the DTM at the Nürburgring. During the qualifying thriller on Saturday the Dane from Audi Sport Team Abt Sportsline was only bumped from the pole position to second place at the last moment of a nail-biting finale. In the sixth race of the season the Audi factory driver will start from the first row for as much as the third time – and, what’s more, ahead of the leader of the standings, Bernd Schneider (Mercedes).

Four Audi drivers made it into the top eight during the “shoot-out” qualifying. Mattias Ekström in the Red Bull Audi A4 DTM cockpit claimed fifth place on the grid. For the home race of Eifel region-based Audi Sport Team Phoenix, Christian Abt came seventh, achieving the best result of a 2005-spec A4 and – for the first time – qualifying for the top eight. Heinz-Harald Frentzen, who had set the fastest time of the day on Friday, also joined the ranks of the quickest eight despite the fact that the radio of his Veltins Audi A4 DTM was not working during qualifying.

Martin Tomczyk drove the quickest time in the first section of the three-part qualifying session and will start the race from the fifth row. Former Formula 1 racer Nicolas Kiesa was the quickest driver of a 2004-spec car in his DTM debut straight away.

For the race, the weather forecast has predicted changing weather conditions in the Eifel region. The race will start on Sunday at 2 p.m. (local time). ARD will air a live broadcast from the Nürburgring on “Das Erste” starting at 1:45 p.m.

Dr Wolfgang Ullrich (Head of Audi Motorsport): “That was a nail-biting finale. We’d been thinking that Tom had made it when, at the last moment, Spengler managed a quicker lap yet. The gaps between the cars at the front of the field are extremely small and we’re part of the action at this pace. This will probably be a close race.”

Tom Kristensen
Audi Sport Team Abt Sportsline, Siemens Audi A4 DTM #7
2nd place, 1m 24.525s / 1m 24.164s / 1m 23.605s
“It was a perfect qualifying, in which we kept getting better and better. We drove with a pretty stiff set-up and that worked out well. I really thought I’d taken pole after the team had informed me via the radio. At the last moment I wound up losing it after all because Spengler was suddenly much quicker in the final section. I don’t know how he did that. At least I’m on the first row, though.”

Mattias Ekström
Audi Sport Team Abt Sportsline, Red Bull Audi A4 DTM #5
5th place, 1m 24.811s / 1m 24.303s / 1m 23.985s
“That was a really close situation today. Considering we had a difficult day yesterday, I’m satisfied with my fifth place. When you go into qualifying in the DTM and want to start from pole you have to be sorted one hundred per cent. And today we weren’t.”

Christian Abt
Audi Sport Team Phoenix, Playboy Audi A4 DTM #12
7th place, 1m 24.750s / 1m 24.425s / 1m 24.302s
“The fact that we’re in the top eight for a change was important for the team today. As early as in the free practice session we had suggested that a good place would be possible. Actually, considering the time I clocked, I’d been hoping for a position further towards the front of the grid but in the last section the times got quite a bit faster yet. It’s incredible how thrilling the competition is in the DTM.”

Heinz-Harald Frentzen
Audi Sport Team Abt Sportsline, Veltins Audi A4 DTM #6
8th place, 1m 25.118s / 1m 24.473s / 1m 24.308s
“During the qualifying the radio stopped working. In such a situation that’s an extreme disadvantage because you’re no longer able to give any fine-tuning instructions to the mechanics and engineers while you’re driving. Communication is very important in qualifying. As far as the race is concerned, I remain optimistic: Yesterday the set up of my A4 for the race was very good.”

Martin Tomczyk
Audi Sport Team Abt Sportsline, Red Bull Audi A4 DTM #4
10th place, 1m 24.430s / 1m 24.500s
“I’m disappointed because this wasn’t what I’d planned to achieve. We worked for the qualifying and also had a good car. I wasn’t able to adjust to the grip conditions on the track and pick up more speed. Now there’s a lot for us to analyse. This day’s history as far as I’m concerned.”

Timo Scheider
Audi Sport Team Rosberg, Gebrauchtwagen plus Audi A4 DTM #16
13th place, 1m 24.710s / 1m 24.584s
“Of course 13th place is nothing to rave about. We had improved the car for the qualifying once more. The tyre sets felt differently, which gave me a slight sense of uncertainty at the limit. To some extent, I was able to make up lots of time at the beginning of the laps which I then lost again by driving too aggressively. In the second sector the car was understeering heavily. There wasn’t all much lacking for being able to make it into the top eight.”

Pierre Kaffer
Audi Sport Team Phoenix, Castrol Audi A4 DTM #14
14th place, 1m 25.055s / 1m 24.947s
“Today, a better result would definitely have been possible because the car was good and so was my feeling. On my last lap I was quick but, unfortunately, made a big mistake. Whether I’d have made it into the final qualifying session otherwise, I don’t know – but I’m sure my result would have been better than 14th place.”

Frank Stippler
Audi Sport Team Rosberg, S line Audi A4 DTM #15
16th place, 1m 25.251s
“I’m not satisfied with my home race. I was driving behind Timo, maintaining a sufficient distance, but when he made a braking mistake I was too close behind him. I should have stopped the trial, but that would have been bad as well. By following too closely, my car slipped and I no longer had a chance.”

Nicolas Kiesa
Futurecom TME, Futurecom Audi A4 DTM #19
17th place, 1m 25.387s
“I had a pretty good first lap on the first set of tyres. The set-up was exactly as I’d been hoping it would. On the second set of tyres I made a slight mistake during my first trial. On the next fast lap I was four tenths quicker when I made a mistake on the opposite straight. Otherwise I might have even made it into the second qualifying session. I’m satisfied to be the best driver of a 2004-spec car but it’s a shame that I didn’t make it into the second section.”

Vanina Ickx
Futurecom TME, Original Zubehör Audi A4 DTM #20
20th place, 1m 26.371s
“I didn’t have any reason to get my hopes up too much because I didn’t drive any laps during the free practice session on account of a power steering problem. I had to risk using the set-up from the day before which hadn’t been good either. At least, I clocked a 1m 26s time – that was quite alright.”

Hans-Jürgen Abt (Team Director Audi Sport Team Abt Sportsline): “Today’s session was a thriller to the last corner, and that’s exactly what the DTM is all about. I’m satisfied because Tom (Kristensen) is on the grid in front of Bernd Schneider, which is a super base to start from in the fight for the title. Congratulations to Tom for a fantastic lap and to the whole team for doing a perfect job and exploiting the car’s potential to the max.”

Ernst Moser (Team Director Audi Sport Team Phoenix): “We made it into the top eight for the first time. I’m very happy with Christian’s performance. Finally, we’ve achieved the goal in qualifying which we’ve been working on for a long time. Pierre’s 14th place in the second group is a little less than what we’d expected. Nevertheless, we’re generally very satisfied because our grip positions offer a lot of potential.”

Arno Zensen (Team Director Audi Sport Team Rosberg): “Today, the situation was close. Timo missed the last qualifying sequence by a tenth, which – needless to say – doesn’t make me happy. His time, generally, was in a good range. Frank had a bit of a misfortune because he may have been following a little too closely in his last trial. Today a better result would have been possible.”