Audi driver Ekström to start from first row yet again 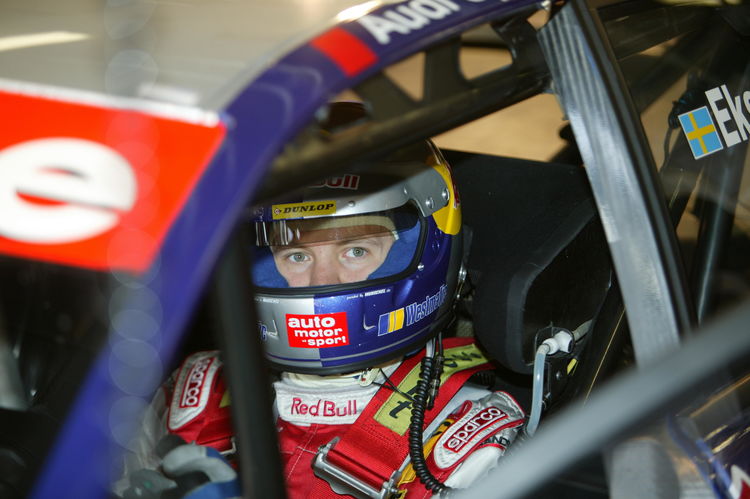 At the DTM’s fourth round, an Audi A4 DTM will be starting from the first row of the grid yet again. Under extremely difficult conditions, Audi works driver Mattias Ekström managed to lock in position two at EuroSpeedway Lausitz. After the Swede had clocked the fastest time – by far – of the whole weekend during the free practice session in the morning, rain set in before the qualifying. Driving the Audi A4 DTM in wet weather for the first time, the Adria winner clinched third place in the qualifying session. In the subsequent super pole single timed lap, Ekström was the first driver to choose slicks as the track was just beginning to dry off, and this choice proved to be exactly right. Another Audi driver, Christian Abt, qualified for the top ten as well. For Emanuele Pirro, his eleventh place on the grid marked his best qualifying result so far. Tom Kristensen, Frank Biela and Martin Tomczyk will be starting from positions 18, 19 and 21.

Mattias Ekström (Audi Sport Team Abt / Audi A4 DTM #5)
2nd, “Super Pole“, 1m 45.511s
“Today, I drove the A4 in rain for the first time, and this was quite exciting. Everything went very well, and I clinched third place, closely following the front runners. The crucial thing during the super pole was to keep the car on the track under these difficult conditions. Although I might have been able to clinch pole on dry asphalt, I’m happy to be starting from the first row.”

Christian Abt (Audi Sport Team Abt Sportsline / Audi A4 DTM #11)
10th,“Super Pole“, 1m 59.893s
“Under difficult qualifying conditions, I managed to make it into the super pole session, that’s why I’m quite happy with my result. During the single timed lap, the track was getting faster and faster. Because I had to go out on the track so early, more than a tenth place was hardly in it for me. Now, I’m looking forward to tomorrow, because with the setup for the race my A4 is really quick.”

Emanuele Pirro (Audi Sport Infineon Team Joest / Audi A4 DTM #44)
11th, 1m 59.240s
“I was really looking forward to this qualifying session very much. I like rain, although I’d never driven the A4 in rain before. Unfortunately, a last-minute change I’d made to the setup affected the car’s balance, causing it to understeer heavily. At least, being eleventh on the grid is the best starting position I’ve so far achieved in the DTM.“

Tom Kristensen (Audi Sport Team Abt Sportsline / Audi A4 DTM #12)
18th, 2m 00.406s
“Of course, I’m not satisfied with my result. Of all places, having to drive the A4 in rain during the qualifying on this circuit, which is new for me - that was tough. The track was very slippery, and I made some mistakes. After changing the rear tyres, I had two more laps left. In the first, I made a mistake, and the time I clocked in the second was taken away from me due to yellow flags. Too bad, but tomorrow’s another day.”

Frank Biela (Audi Sport Infineon Team Joest / Audi A4 DTM #45)
19th, 2m 00.650s
“The track was very slippery during the qualifying session, with hardly any grip. Still, cornering was less of a problem, though braking was. The wheels quickly started to lock, that’s why I slid off the track twice. What’s more, my fastest lap was not counted, although I took my foot off the throttle in the respective sector.“

Martin Tomczyk (Audi Sport Team Abt / Audi A4 DTM #6)
21st, 2m 01.255s
“My A4 was running well in the rain, too, and I probably would’ve made it to the front of the field again. Unfortunately, there were some communications problems with my team. Consequently, I was able to do only one timed lap. Of course, the result that came out of this is disappointing. But I’m definitely going to fight in the race. My goal is still to be scoring points again.”

Hans-Jürgen Abt (Team Director Audi Sport Team Abt Sportsline): “It’s the fourth race of the year, and for the fourth time a blue Audi A4 DTM will be starting from the first row on the grid – I think we can be satisfied with this. Our decision to use slicks was right on target. And, once again, Mattias made the best of the situation. Now, if he can manage a good start on top of that, we’ll have very good chances in tomorrow’s race.”

Ralf Jüttner (Technical Director Audi Sport Infineon Team Joest): “In rain you always need a little luck and that’s, unfortunately, what we didn’t have. Emanuele was doing a very good lap, which he had to stop on account of the yellow flags. Otherwise, he might have even qualified for the super pole session. Frank’s fastest time was not counted, although he took his foot off the gas in the sector with the yellow flags.”

Dr Wolfgang Ullrich (Head of Audi Motorsport): “Mattias’ result is, once again, a superior achievement. Under difficult conditions, he made the best of the situation. Clearly, it must be recognised that he was the first to have the courage to go out with slicks, while the track was still partially wet, and that the two drivers after him no doubt had better conditions. Unfortunately, overall, our team performance today was not all that great. We simply don’t have a lot of experience yet with the Audi A4 DTM in the rain.”