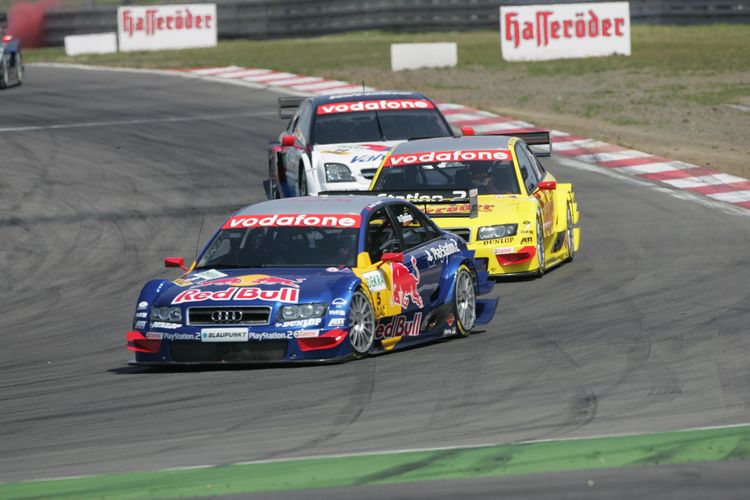 After setting best times on Friday, Audi driver Mattias Ekström on Saturday again set the benchmark for the DTM race at the Nürburgring. The Swede in his Audi A4 DTM was the quickest in the free practice session as well as clocking a superior best time of 1m 23.390s in the qualifying. In the subsequent single timed lap of the top ten (“super pole“), though, the Swede fell short of his own benchmark by six tenths of a second, because his tyres failed to build up the same grip as in the qualifying session. Nevertheless, at 2 p.m. (local time - with live broadcast on ARD) on Sunday, Ekström will start from the first row ahead of the current leader of the standings, Christijan Albers. Starting from position three, Christian Abt has so far scored his best qualifying result of the season. After making some mistakes in the “super pole” session, Tom Kristensen and Martin Tomczyk will start the race from the fifth row of the grid. Emanuele Pirro came in eleventh, barely missing the top ten by two thousandths of a second, Frank Biela will start from position 14.

Mattias Ekström (Audi Sport Team Abt / Audi A4 DTM #5)
2nd place “super pole“, 1m 24.062s
“I truly had two fantastic days here – up to the super pole lap... Considering that I’d been the quickest in all of the sessions, the team would definitely have deserved my starting from pole. I don’t know why, but in the super pole lap the tyres suddenly had less grip than in the qualifying. I really had to fight hard, and given these circumstances, I’m more than happy with position two. And, for the race we have a really good setup.“

Christian Abt (Audi Sport Team Abt Sportsline / Audi A4 DTM #11)
3rd place “super pole“, 1m 24.173s
“In both the free practice and the qualifying session, everything was going well in the first and second sector. Yet in the final sector I kept losing four to five tenths of a second. That’s why I fully concentrated on the final sector in the super pole. I’m really happy: finally, I’ve made it to the very front of the field. Now, I’m going to go into the race completely calm and collected and try to help Mattias.“

Tom Kristensen (Audi Sport Team Abt Sportsline / Audi A4 DTM #12)
9th place “super pole“, 1m 24.670s
“I tried to get through the corners behind the pits particularly fast, but went into a slide, which caused me to lose a lot of time. Starting from position three would have been a realistic possibility, but simply wasn’t meant to be. Consequently, I’ll have to fight my way to the front – yet again – tomorrow. That’s possible, though, because my A4 is really good.“

Martin Tomczyk (Audi Sport Team Abt / Audi A4 DTM #6)
10th place “super pole“, 1m 30.327s
“I was a bit nervous. After the qualifying we had to change the power steering pump and the mechanics were working on this up to the last second. After the first sector, I noticed that my time wasn’t right, and I wanted to make up for this. I then went into the first corner at too much of an angle, while keeping my foot on the throttle. That could have worked out, but unfortunately I went into a spin. Still, starting from position ten, it’s possible to achieve a good result in the race.“

Emanuele Pirro (Audi Sport Infineon Team Joest / Audi A4 DTM #44)
11th place, 1m 24.337s
“It would have been possible for me to reach the top ten. However, I drove an additional lap with the second set of tyres, because I was clocking good times, thinking that my time was sufficient. Consequently, I wasn’t able to use my third set of tyres. In retrospect, this was probably a mistake, as the track was getting faster towards the end. Nevertheless, I’m optimistic with regard to the race.“

Frank Biela (Audi Sport Infineon Team Joest / Audi A4 DTM #45)
14th place, 1m 24.574s
“The fighting in the DTM is so tight that you have to fine-tune every single detail. That’s why I’ve started to look into completely different areas than before. That’s probably the right approach, but there’s still a small bit that’s missing. We’re going to try to make further improvements by tomorrow to achieve the best possible result in the race.“

Hans-Jürgen Abt (Team Director Audi Sport Team Abt Sportsline): “Considering that the whole weekend was going so well for us, it goes without saying that we’d been expecting a better result. We had the chance to get all four cars into the top five. This would have enabled us to give Mattias a little more backing. Yet, he’ll be starting from the first row - and Christian from position three, which makes me feel particularly happy for him: it proves that he’s still got what it takes.“

Ralf Jüttner (Technical Director Audi Sport Infineon Team Joest): “Emanuele decided to take a gamble, driving two timed laps with his second set of tyres. This, obviously, meant that he’d shot his bolt. Three trials would have probably been better, though, because most of the drivers clocked their best times with their third set of tyres. Nevertheless, we have the chance of scoring points from positions eleven and 14. After all, we’ve managed to clinch points before after having started from much less favourable positions.“

Dr Wolfgang Ullrich (Head of Audi Motorsport): “Needless to say, we were aiming for pole after being so far ahead in all the practice sessions. Unfortunately – for various reasons – we weren’t able to fully apply this advantage in the qualifying session. We now have to analyse why Mattias’ tyres didn’t have the same grip in the super pole lap as in the qualifying. Still, he’ll be starting from the first row. Christian, as well, rendered a super performance. We’ve got four cars in the top ten, and that’s a good basis for the race. Tomorrow, we’re going to try to make the best of it.“