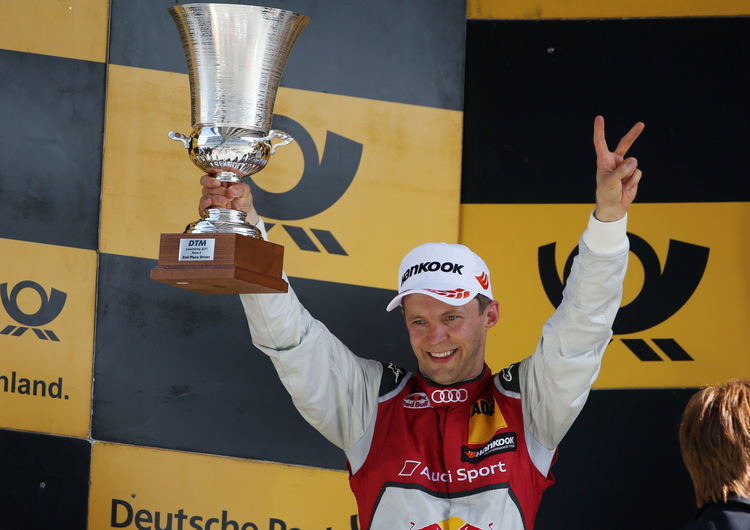 With an unusual strategy Mattias Ekström clinched his first podium result in the 2017 DTM at the Lausitzring last weekend. In the FIA World Rallycross Championship, the Audi driver is the leader of the standings before round five at Lydden Hill (GB) next weekend. Time for an initial in-season assessment.

You’re leading the World RX and mounted the podium for the first time this year in the DTM last Sunday. Are you happy with the start of the new season?
Mattias Ekström: “Starting the new rallyross season with three victories in the first three races was simply incredible, a dream! In the DTM, I had good races on the first two weekends, but poor qualifying sessions. That’s why I’m not where I’d like to be in the standings. But much more importantly, the DTM is on the right track and fun again – for us drivers as well as for the fans.”

What’s so good about the “new” DTM?
“Finally, some things have been put into action that had only been talked about for years. A lot has happened in winter and the result is good. All the changes that have been made immediately panned out well on the first two weekends. The DTM has always been highly competitive, but the races were often less exciting, especially on Saturday. Now, we’re seeing plenty of overtaking maneuvers and you can advance to the far front even from positions on the rear of the grid. At Hockenheim and at the Lausitzring we saw fantastic overtaking maneuvers. That’s great for the fans, but for us drivers, too.”

On Saturday at the Lausitzring, you even passed two BMW cars in one go and on Sunday, in pursuit of second place, overtook Mercedes driver Robert Wickens on the outside. The fans in the grandstands went wild…
“This is the kind of action the fans would like to see. I immediately posted videos of the two overtaking maneuvers on social media and got lots of likes and comments. In rallycross, we’re constantly battling hard. In the DTM, we haven’t seen such a large number of overtaking maneuvers and as much action as this year in a long time – and it’s all been fair. When you overtake on the outside you have to be able to rely on your opponent playing along. That was the case with Robert (Wickens) on Sunday and with Augusto (Farfus) and Marco (Wittmann) on Saturday, too. I’ve always said that having fewer drivers this year is actually good because it raises the level of quality.”

Do you also have the feeling that the fans are responding favorably to the “new” DTM?
“The atmosphere at Hockenheim and at the Lausitzring was very positive. You can feel the upbeat spirit – not least thanks to the new boss, Gerhard Berger, at the helm. The DTM has always been committed to being in close touch with the fans, but was hiding the cars from the spectators. That has changed now. Things like the Pit View are great. Our mechanics are not used to being watched at work that way, but for the fans it’s fantastic. They finally get to see the fascinating technology of a DTM car. I’d say the direction is right and I wouldn’t mind seeing more of it.”

How do you feel about the new Indianapolis-style start following a safety car deployment?
“It’s very good! It makes for action. Obviously, as drivers we have to get used to this as well and the rules had to be fine-tuned somewhat. But, essentially, it fits our format. I’d also be in favor of having four or five cars line up side by side for the normal DTM start – similar to rallycross. The fans simply want entertainment.”

Changing the subject: how good is the new Audi RS 5 DTM?
“Over the race distance, our Audi is the benchmark at the moment. During the tests in winter, we attached great importance to this because we knew that race performance would be crucial with the new rules. In qualifying, we still need to somewhat up the ante. But that’s part of the DTM rules as well: if you want to be strong over the race distance you have to accept some compromises in qualifying. The spectators benefit from this because they get to see a lot of overtaking maneuvers as a result. But we’re going to work on starting a little further toward the front. Jamie (Green) and René (Rast) have shown that it can be done, so I have to be able to do it, too.”

At the Lausitzring on Sunday, whose idea was it to change tires after just one lap?
“Even before the season, I said that the softer tires were a step in the right direction. If conditions aren’t too hot it’ll even be possible to drive the whole distance on some tracks if you have the right setup. And we had that at the Lausitzring. I’ve always been able to manage the tires pretty well, so I felt that the risk wasn’t high. And from position eight on the grid, you simply have to take some risks. That’s why I said: I’m going to pit right after the first lap. It worked out because the tires were in top shape up until the end.”

Last question: are you going to race in the DTM at the Norisring or in rallycross at Höljes?
“This is a question our boss (Dieter Gass) has to answer. I wouldn’t want to be in his shoes…”