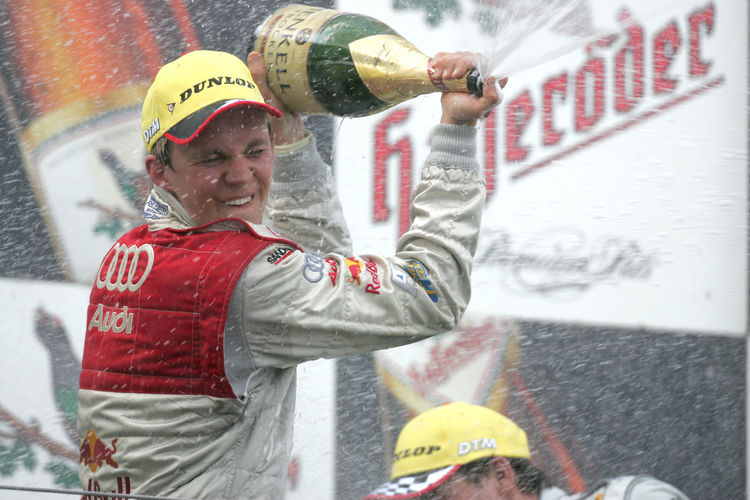 Mattias Ekström has kept his promise of recapturing the DTM lead for Audi at the Nürburgring. Before a perfect turnout (103,000 spectators during the weekend), the Swede in his Audi A4 DTM clinched second place, now leading the overall standings by five points ahead of the previous leader, Christijan Albers. Though Ekström had fallen back to third place right after the start, he managed to move back to second as early as in the first lap. Over the whole distance, the Audi works driver stayed on the heels of Gary Paffett, the ultimate winner of the race, whilst avoiding any unnecessary risk that might have jeopardized his aim of recapturing the lead of the standings. Tom Kristensen, as well, delivered a strong performance: the Dane in his Audi A4 DTM fought his way up to fifth place after starting from grid position nine. The other four Audi drivers were involved in collisions right in the starting lap, which frustrated any ambitions they’d had for the race.

Mattias Ekström (Audi Sport Team Abt / Audi A4 DTM #5)
2nd place, + 2.190s
“A second-place finish in the race wasn’t a perfect result. I think we could have won, but it’s a lot more important to lead the standings. And now I’m even leading by five points. I hope that’s a good omen for the second half of the season. The race itself wasn’t particularly exciting for me. I knew that the start offered the best opportunity for me to overtake Gary (Paffett). Unfortunately, I had too much wheelspin. Then, in the first corner, I saw Dumbreck coming up in the rear view mirror. I could have easily thwarted his attack but didn’t want to take any risk. Three turns later, I overtook him again. Then, I kept getting closer and closer to Paffett, but not close enough.“

Tom Kristensen (Audi Sport Team Abt Sportsline / Audi A4 DTM #12)
5th place, + 24.722s
“This weekend, I was consistently among the quickest three – except in the super pole session. That’s why I had to start so far from the rear, and of course it was difficult to move forward from my grid position. My team, though, had a fantastic strategy so that I was able to make up a lot of places. Without my engine stalling during the second pit stop, third place would even have been possible for me. Still, I’m satisfied: I scored some valuable points and once more learnt a lot about the DTM.“

Emanuele Pirro (Audi Sport Infineon Team Joest / Audi A4 DTM #44)
11th place, + 40.122s
“My expectations for this race had been a lot higher, but we were simply out of luck with our strategy. On several occasions, I got caught behind slower cars. The first lap was total chaos. Some of the drivers ran into each other without any reason. Unfortunately, I wasn’t able to benefit from this, as my A4 was damaged as well. I lost speed on the straight, and the car no longer had perfect balance.“

Christian Abt (Audi Sport Team Abt Sportsline / Audi A4 DTM #11)
13th place, + 1m 15.514s
“The start was okay, but right in the first corner someone hit me in the right rear. This caused a slow puncture, forcing me into the pits after the first lap. After my great results in the practice sessions, I’m truly disappointed.“

Frank Biela (Audi Sport Infineon Team Joest / Audi A4 DTM #45)
retired (result of crash)
“The start was good, turn 1 was good, turn 2 was good, turn 3 was the end of my race. I got caught in a double lock of two other cars. Both of them hit me while pulling inwards, and then all three of us slid into turn 3, taking poor Martin (Tomczyk) with us as well. That was a real pity, but I had no chance whatsoever to avoid this collision.“

Martin Tomczyk (Audi Sport Team Abt / Audi A4 DTM #6)
retired (result of crash)
“My start was super, I was in fifth place, already, when I was suddenly hit from behind in turn 3. I’ll have to watch the TV footage to find out exactly what happened. Needless to say, retiring with such a good car in the first lap is a huge disappointment.“

Hans-Jürgen Abt (Team Director Audi Sport Team Abt Sportsline): “Mattias simply drove another sensational race. It’s too bad he fell back by one position at the start. This made him lose a relatively large amount of time in the first lap. And if you lose time, you simply have no chance against someone like Gary Paffett. Both of them were – yet again – in a class by themselves. A 23-second lead over the third-placed driver, that says it all. Congratulations to both of them!“

Ralf Jüttner (Technical Director Audi Sport Infineon Team Joest): “A meagre reward for lots of hard work: after the first lap, the race was actually finished for us. Frank suffered damage to one of his radiators in the chaotic events following the start, forcing him to retire. With Emanuele, we had been planning all along to keep him on the track for as long as possible in his first stint. He got entangled in the collisions as well and was subsequently hampered by damage to the front of his car. Nevertheless, despite his damaged car, he put up a remarkable fight with dogged determination.“

Dr Wolfgang Ullrich (Head of Audi Motorsport: “Unfortunately, we lost three cars very quickly. Yet those remaining in the race truly gave their best. Mattias drove a fantastic race. Tom, also, managed to move from the rear to the front very well. It’s true that we didn’t win the race, as we had planned to. But now we’re again leading the championship, and that’s a result we can certainly be satisfied with.“