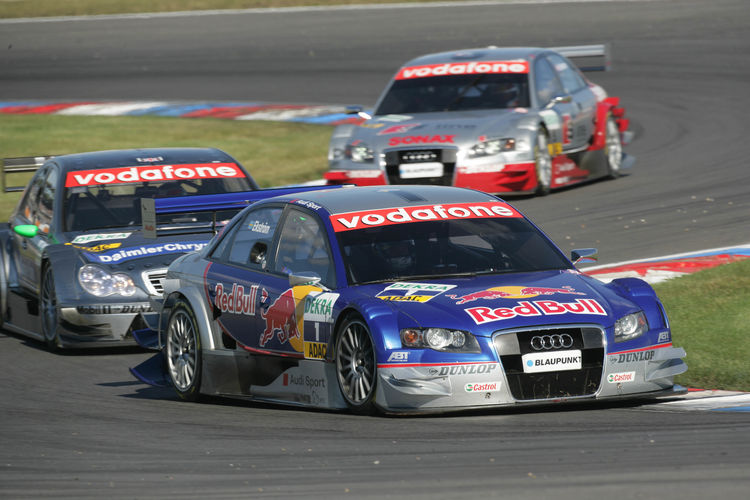 By claiming victory after a tough fight at the EuroSpeedway Lausitz, Audi works driver Mattias Ekström recaptured the lead in the DTM. Prior to the final two races, the Swede from Audi Sport Team Abt Sportsline is now again ranking one point ahead of Mercedes driver Gary Paffett, with whom he fought a thrilling duel for victory. Ekström showed strong nerves yet again: from the fourth of 48 laps onwards, the two title contenders were driving around the circuit bumper to bumper. Thanks to a perfect strategy, quick pit stops and absolutely faultless driving, Ekström managed to stay in front of the Brit throughout the race to secure Audi’s third victory of the season. In the manufacturers’ standings, Audi further expanded its advantage over Mercedes-Benz.

Audi’s triumph at the EuroSpeedway was completed by Tom Kristensen finishing in third place. The Le Mans record winner thus managed to secure his third place in the drivers’ standings before the end of the season. The fourth in the standings, Mika Häkkinen, will not be able to equal Kristensen’s score in the two remaining races.

Best driver of a 2004-spec A4 of Audi Sport Team Joest was Rinaldo Capello, who came eleventh. Finishing in ninth place, Allan McNish barely missed scoring a point. After spinning, Martin Tomczyk and Frank Stippler claimed tenth and 13th place. Christian Abt was hit by another car and had to retire, as did his team-mate Pierre Kaffer.

Mattias Ekström (Audi Sport Team Abt Sportsline #1)
1st place
“Of course I’m very happy to have won and recaptured the championship lead, too. Even though Gary (Paffett) was a bit quicker in the race than I, he had no chance of overtaking me. Our strategy was perfect. I knew before that a good start would be crucial and was planning to pass one car. All the better that it turned out to be two. I had no problem holding up to the pressure in the race.”

Tom Kristensen (Audi Sport Team Abt #5)
3rd place, + 3.062s
“The car was good and so was the strategy. I was able to push forward to third place quickly. Unfortunately I had to restart the car during my second pit stop because of a clutch problem, that’s why I wasn’t able to go out again in front of Gary (Paffett). As a result, I lost time behind Bruno (Spengler). Because my third place in the championship is secure now, I suppose I could start riding my bicycle. But of course I’m not going to do that. Instead I’m going to try and help Mattias (Ekström) in his defence of the title.”

Allan McNish (Audi Sport Team Abt #6)
9th place, + 29.766s
“The race went better than the qualifying. Finally, I had a bit more grip, even though it was somewhat limited again after my second pit stop. With a good strategy, we managed to push forward from 15th to ninth place.”

Martin Tomczyk (Audi Sport Team Abt Sportsline #2)
10th place, + 30.198s
“My start was good. I was alongside Gary (Paffett) and wanted to make some room for Mattias that way. Unfortunately Gary hit my front wheel, forcing me to spin. Well, those things happen.”

Rinaldo Capello (Audi Sport Team Joest #18)
11th place, + 30.553s
“My speed in the race was very good, I drove the fourth-quickest race lap of all the drivers. Unfortunately I was spun and that practically meant the end of my race. That’s too bad because I’ve often proved that I’ve got the speed, so it’s time to reap some points. All I need now is a little luck.”

Frank Stippler (Audi Sport Team Joest #19)
13th place, + 36.747s
“That was one of the worst races in my career. In the beginning I brushed a team-mate – of course something like that shouldn’t happen. Then, for inexplicable reasons, my car braked too heavily at the rear axle. That’s something we’ll have to analyse.”

Pierre Kaffer (Audi Sport Team Joest Racing #15)
Retired (brakes)
“That was a short race for me today. Too bad, because I had big plans. My start was perfect, I was able to make up four places and had no traffic in front. Then, in the ADAC corner, I was forced to go straight because of problems with by brakes.”

Christian Abt (Audi Sport Team Joest Racing #14)
Retired (collision)
“On the first lap, things were going well, I was able to make up several places. Then, ‘Dindo’ (Capello) pushed a bit too hard and spun me. Even after that my lap times were okay, unfortunately, though, a two-time world champion behind me got nervous and pushed me off the track.”

Hans-Jürgen Abt (Team Director Audi Sport Team Abt Sportsline): “That was a sensational day for us. Everything was exactly right. Strategy, driving performance. What Mattias Ekström and Gary Paffett showed today was perfect promotion of the DTM. I’m totally overwhelmed. You get no ‘freebies’ here and have got to be in top shape to be at the very front. That’s why I’m proud of our team.”

Ralf Jüttner (Technical Director Audi Sport Team Joest): “This wasn’t such a good race for us. And we really had chances of scoring points. Too bad that Pierre started having problems with the brakes because he was the only one of our drivers who wasn’t spun during the race. All four of them drove good lap times. Of course for Audi, the result was fantastic. I’m happy that Mattias (Ekström) took the lead in the standings again. Congratulations.”

Dr Wolfgang Ullrich (Head of Audi Motorsport): “A great race. The two front runners decided it amongst themselves – that’s the best thing that can happen in the DTM. Today, truly everything was perfect: the start , the strategy, the teams performing excellent pit stops. Mattias kept his cool, that’s why Gary (Paffett) was not able to get past him. Tom (Kristensen), as well, kept up with the pace very well. We can be proud of having two drivers finish on the podium in such a race, and of course of retaking the lead in the championship, as well.”