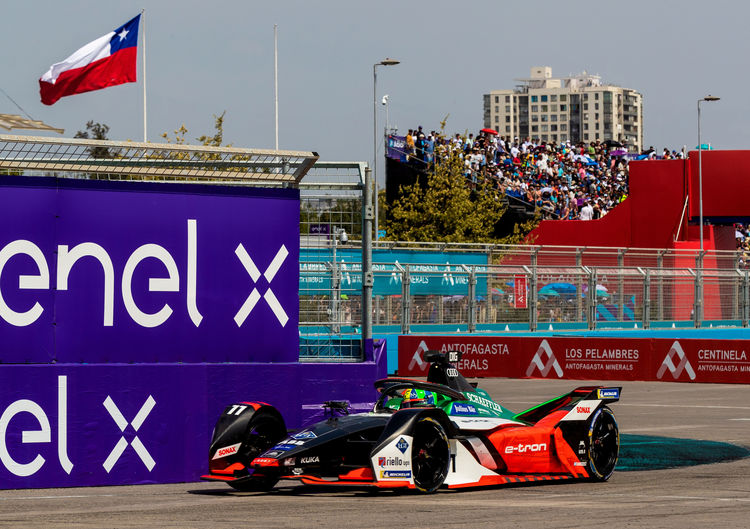 Formula E started 2020 with a spectacular race in Santiago de Chile. Lucas di Grassi from the Audi Sport ABT Schaeffler team thrilled the South American fans with a forward charge from 22nd place on the grid to seventh place.

Thrilling duels, plenty of overtaking maneuvers, collisions and suspense right up to the last lap: The E-Prix at Parque O'Higgins in the Chilean capital delivered a typical Formula E race that swept the spectators off their seats. “It was absolutely fantastic,” said Lucas di Grassi. “I'm completely exhausted, but overjoyed to have moved up to seventh place from the second last row of the grid. I’m very proud of the entire team and Audi.”

The Brazilian had bad luck in qualifying, when an accident happened directly in front of him. He started the race from 22nd on the grid. With his comeback drive, he underlined that the Audi e-tron FE06 is one of the fastest cars on the grid.

Teammate Daniel Abt had to cope with traffic in qualifying. The German worked his way forward from 13th on the grid to eighth in the race. A 30-second time penalty subsequently imposed on him for causing a collision dropped him back to 14th.

“Today it was a real street fight,” said Team Principal Allan McNish. “After a difficult qualifying session, we all knew that it was going to be a tough race for us. But, once again the team fought its way back. The fact that Lucas was able to move up to seventh was impressive. It’s a pity that Daniel was penalized for one of the many incidents that occurred today. It was a tough race weekend for us, but we’re taking important points with us from Santiago and are already looking forward to the next race in Mexico.”

Sam Bird scored one point for Audi customer team Envision Virgin Racing in tenth place, despite being spun around. Robin Frijns finished 15th after contact in the frantic action at the start.