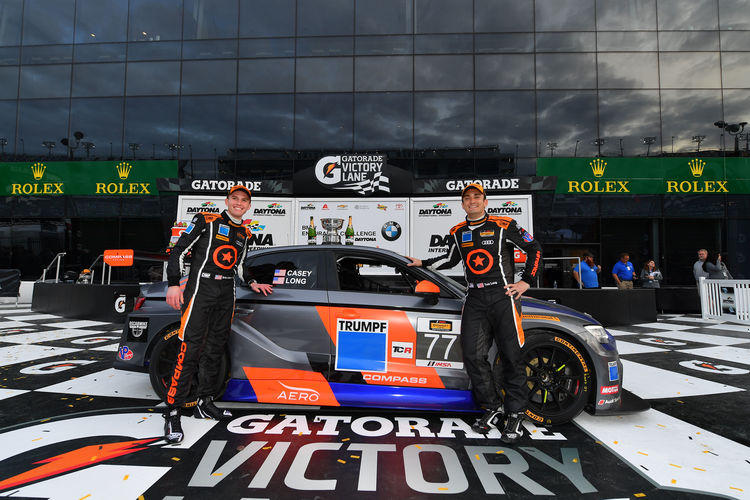 Following the one-two class win of the new Audi R8 LMS GT4 in Dubai two weeks ago, the North American season began with a success for Audi Sport customer racing as well. To kick off the IMSA season at Daytona, all three products of the brand – the GTD and the GT4 versions of the Audi R8 LMS and the Audi RS 3 LMS – were on the grid in America for the first time. In the TCR class of the IMSA Continental Tire SportsCar Challenge, the Audi RS 3 LMS scored a 1-2-3-4 result.

The Audi customer teams in the TCR class delivered top-class entertainment in the famous oval at Daytona. After four thrilling hours of racing with many slipstream duels, Americans Britt Casey Jr./Tom Long in the Audi RS 3 LMS from Compass Racing won ahead of their teammates, Rodrigo Sales/Kuno Wittmer, with an advantage of just 1.955 seconds. Matt Fassnacht/Justin Piscitell from Team Murillo Racing trailed them by only 0.079 seconds in third position. Lee Carpentier/Kieron O’Rourke completed the 1-2-3-4 success of the Audi RS 3 LMS for eEuroparts.com Racing. The Grand Sport class saw four Audi R8 LMS GT4 cars on the grid for the first time. Following an action-packed race, the American-Polish women’s team of Ashley Freiberg/Gosia Rdest with GMG Racing in position 18 was the best Audi driver team.

“Sincere congratulations to our TCR teams on this 1-2-3-4 success,” said Chris Reinke, Head of Audi Sport customer racing. “This was a strong start to a season in which more Audi Sport customer race cars than ever before will be seen in North America. We look forward to further successes in various classes.”

While the GT4 and TCR race cars contested the IMSA Continental Tire SportsCar Challenge two Audi R8 LMS cars tackled the competition in the IMSA WeatherTech SportsCar Championship, battling for their third victory in the GTD class in the 24-hour race at Daytona. The German Montaplast by Land-Motorsport team repeatedly led this classification in the course of the first nine hours of the race with Kelvin van der Linde/Sheldon van der Linde/Christopher Mies/Jeffrey Schmidt. Then a 5-minute stop-and-go penalty was imposed because the squad was accused of a sporting violation during refueling. The team accepted the penalty. During the night, the mechanics also had to change a defective rear wing. As a result, the number 29 Audi lost four laps in total. Before the finish, the team unlapped itself once and saw the checkered flag in seventh position. The American Magnus Racing team that had won the GTD class with Audi in 2016 achieved position six with Andrew Davis/Andy Lally/John Potter/Markus Winkelhock.

Between now and October, eleven more events are on the IMSA WeatherTech SportsCar Championship calendar and nine other events will follow in the IMSA Continental Tire SportsCar Challenge. Audi Sport customer racing’s GT3, GT4 and TCR race cars are perfectly represented in another major North American series as well: The Pirelli World Challenge includes ten events between March and September. There Audi’s GT3 sports cars will be battling for overall victories and in the class for TCR race cars Audi is the title defender this year.

Audi Sport customer racing has never before been represented with such a large lineup of customers at so many events on the important North American market. Furthermore, on October 28, the Intercontinental GT Challenge in which Audi is the title defender as well will end at Laguna Seca. It will kick off next week in the Bathurst 12 Hour in Australia where eight Audi R8 LMS will be on the grid.