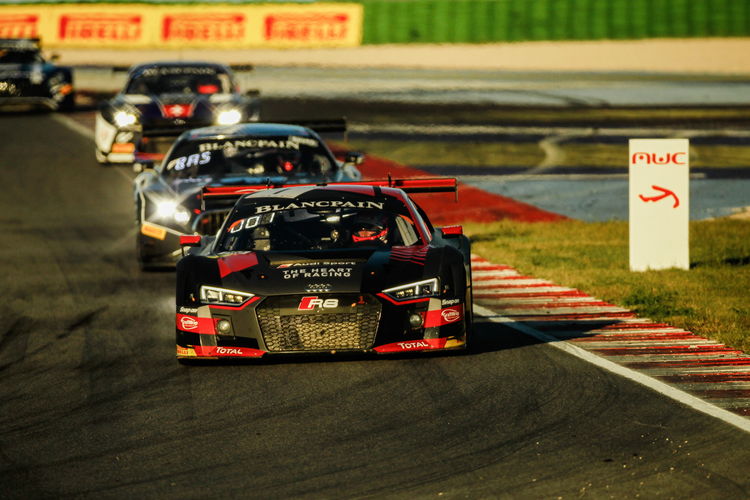 Victory in Italy: The Belgian Audi Club Team WRT celebrated its next victories at the third Blancpain GT Series Sprint Cup race weekend at Misano. After the Belgian squad had previously won both races at Brands Hatch, the two trophies at Misano also went to the team. In Saturday’s race, Christopher Mies/Alex Riberas prevailed for the first time this year. In the Audi R8 LMS, they won the thrilling one-hour race by six-tenths of a second. In Sunday’s race, Audi Sport’s customer teams were unbeatable again: Mies/Riberas won again, but on this occasion from their teammates Will Stevens/Dries Vanthoor. Third place went to Saintéloc Racing with Simon Gachet/Christopher Haase. Steijn Schothorst/Kelvin van der Linde with Attempto Racing completed the one-two-three-four result for the Audi R8 LMS. The German-Spanish driver duo of Mies/Riberas has now taken the championship lead in the Sprint Cup and also the overall lead in the Blancpain GT Series.

Good performance in the Eifel: In round three of the VLN Endurance Championship Nürburgring, Phoenix Racing finished on the podium thanks to a stirring comeback drive. Audi Sport driver Frank Stippler and teammate Vincent Kolb started tenth in the endurance competition. Over the course of the four-hour race, they improved to second in the Audi R8 LMS.

The next trophies: James Sofronas stays on course for the podium in an Audi R8 LMS GT4 in the Pirelli World Challenge. The Californian had to settle for second place at Road America after being beaten by the narrow margin of 0.475 seconds in race one of the third event of the series. In the second race, he finished second again.

Best result of the VLN season: Håkon Schjærin/Atle Gulbrandsen/Kenneth Østvold claimed their best result on the Nordschleife this year during the third race weekend of the VLN Endurance Championship Nürburgring. The three Norwegians, who share an Audi RS 3 LMS, finished second in the TCR class. After finishing third in the previous race they had taken a podium finish already.

Podium in Vila Real: Francisco Carvalho took his second successive podium finish in the TCR Portugal. After third place in the season opener, the Portuguese took second place at the wheel of his Audi RS 3 LMS in race two in Vila Real. In the standings, the privateer from Veloso Motorsport holds third at the halfway point of the season.

Racing flair in Neckarsulm: During the product experience day, employees at the Audi facility Neckarsulm and their families enjoyed real motorsport flair. The entire Audi Sport customer racing product range – the Audi RS 3 LMS as well as the R8 LMS in GT3 and GT4 version – was on display along with the Audi RS 5 DTM and the Audi e-tron FE04. Audi Sport driver Rahel Frey signed autographs and answered many questions posed by the interested visitors.