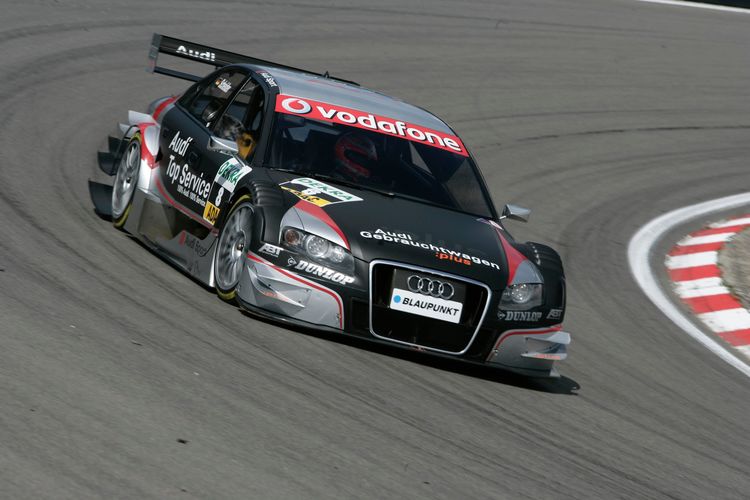 Audi confirmed its role as the favourite for the DTM race at Zandvoort on Friday. In both 90-minute tests, the Audi drivers set the pace on the circuit along the Dutch North Sea coast. In the morning three Audi A4 DTM cars were running at the front of the field, in the afternoon it was as many as four.

The quickest in both test sessions was Timo Scheider who clinched his first pole position in the DTM at Zandvoort in 2003 and who loves the demanding track in the dunes as much as his brand colleagues do. Last year’s winner Tom Kristensen set the second-best time in both tests. Following in third place were Christian Abt in the morning and Mike Rockenfeller in the afternoon, both at the wheel of the best A4 from last year, respectively.

Misfortune struck Vanina Ickx: At the beginning of her first flying round on Friday morning, the Belgian slid into the gravel trap of the notorious “Tarzan Bocht”. After the mishap, her Audi A4 was pulled out of the gravel trap in such an unfortunate manner that during the action the complete front end was destroyed, which meant that Vanina Ickx was not able to test in the afternoon either.

Another free practice session will be on the agenda on Saturday morning before the field will be fighting for the grid positions in the three-part shoot-out qualifying from 1:28 p.m. (local time). ARD will broadcast live on “Das Erste” from Zandvoort starting at 1:30 p.m. The weather could add a further element of suspense: For Saturday and Sunday, rain showers have been predicted for the North Sea coast.

Dr Wolfgang Ullrich (Head of Audi Motorsport): “In the first test we didn’t drive so much as there was a lot sand on the track. In the second test we drove long runs with various set-ups and thus obtained different results. In the process we came up with a particularly good set-up which we will be using in the race. For a Friday, things went well. But only on Saturday will we see where we truly stand.”

Timo Scheider (Gebrauchtwagen:plus/Top Service Audi A4 DTM #8)
1st place / 1st place, 1m 34.569s
“The eager anticipation with which we went to Zandvoort has already been reflected in Friday’s results. Being the quickest twice on Friday makes me feel really happy but, unfortunately, it doesn’t mean a great deal. Much more important was the long run. Our fast laps, as well, were pretty decent already. So it’s been a good Friday for us, but we do want to step things up a bit tomorrow.”

Tom Kristensen (Siemens Audi A4 DTM #7)
2nd place / 2nd place, 1m 34.861s
“Zandvoort is a circuit of the ‘old school’ with many fantastic turns. We’re almost directly on the beach, at least the fine sand has made it onto the track already. This also influenced the tests today. To drive the A4 at the limit in these conditions is really a fascinating thing. We can still improve the set-up for the race a bit more but other than that we’re already very well prepared at this point.”

Mike Rockenfeller (S line Audi A4 DTM #11)
8th place / 3rd place, 1m 35.016s
“As always on Friday, there are no points to be scored but it’s good to know that we’re part of the action. This was to be expected, though. I hope that I’ve found my form again after Mugello. I want to show my potential. I’m really delighted because the car is holding to the track superbly. I hope that Saturday will be a good day as well.”

Alexandre Prémat (Audi Bank Audi A4 DTM #17)
7th place / 4th place, 1m 35.106s
“I’m very satisfied with the day as we were fast in both sessions. In addition to this, we reeled off a very good programme – across short and long distances. Even over a racing distance the car performed very well. I hope to be as strong in qualifying as I was at Mugello. It should be possible as the car is really very good.”

Christian Abt (Playboy Audi A4 DTM #16)
3rd place / 11th place, 1m 35.522s
“We tried a lot of things, which was more important today than a fast lap. We saved our tyres and are completely on schedule. It’s been a good Friday.”

Lucas Luhr (Philips Audi A4 DTM #12)
11th place / 12th place, 1m 35.613s
“The circuit is incredibly good fun. I’d enjoy it even more, though, if I were further towards the front. Something isn’t right. Compared to Mike (Rockenfeller), I’m lacking top speed. We’ll get to the bottom of this.”

Mattias Ekström (Red Bull Audi A4 DTM #3)
10th place / 14th place, 1m 35.628s
“This was a pretty busy Friday with a full programme of testing. We’re pretty satisfied already, but now we need to analyse the data we collected very carefully because there’s definitely room for further improvements. I’m looking forward to the qualifying on Saturday.”

Martin Tomczyk (Red Bull Audi A4 DTM #4)
15th place / 17th place, 1m 35.915s
“Zandvoort always means lots of sand and even more wind. Of course that doesn’t exactly help when it comes to working out a good set-up on the track. Nevertheless, I believe that we’re heading in the right direction. We drove different strategies today and will develop the ‘best of’ from this for our Audi A4 DTM for tomorrow to achieve what we’re shooting for at this venue.”

Markus Winkelhock (Audi A4 DTM #20)
19th place / 16th place, 1m 35.666s
“After we had a bit of a difficult time in the first test we completely reworked the car. In the second test things were clearly better. On the first set of tyres I was two and a half seconds faster than previously on used tyres, although I wasn’t doing as well as I could have in the first two, three corners. We’re on the right track.”

Vanina Ickx (Audi A4 DTM #21)
20th place / 20th place, no time
“Unfortunately, my Friday was very short because I became a victim of the sand at Zandvoort after only one lap. I ended up in a tyre wall. In the end, we even had to change the engine. Nevertheless, I’m very happy to be driving here because Zandvoort is a unique circuit.”

Hans-Jürgen Abt (Team Director Audi Sport Team Abt Sportsline): “That was a typical Friday: lots of long runs, lots of technical things, lots of trying out. Now we’re going to sort the results for Saturday and are hoping to be able to apply all our findings. But the pace is quite good and we’re pretty satisfied.”

Ernst Moser (Team Director Audi Sport Team Phoenix): “In the beginning both drivers were unhappy with the nervous rear of the car that jumped too much. We resolved this by the end of the second practice session. The lap Alex (Prémat) was very good. Christian’s (Abt) balance was okay at the end as well, which makes me feel optimistic.”

Arno Zensen (Team Director Audi Sport Team Rosberg): “With ’Rocky’ things were going great with him achieving third place. There’s even more potential. Hopefully, he’ll be able to repeat this tomorrow. With Lucas (Luhr), we’ve still got some problems, but they can be resolved.“