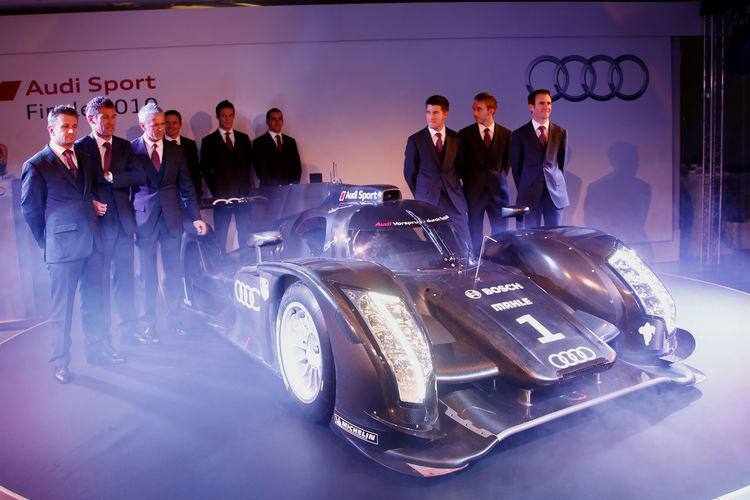 Head of Audi Motorsport Dr. Wolfgang Ullrich has managed to sign all nine drivers who mounted the podium after last year’s historical one-two-three Audi finish in the 24 Hours of Le Mans for Le Mans in 2011. The drivers who compete for the Intercontinental Le Mans Cup (ILMC) for Audi are also confirmed.

“Over the last few years we’ve had a very strong and harmonious driver line-up at Le Mans,” says Head of Audi Motorsport Dr. Wolfgang Ullrich. “Any one of our three cars could have won, which explains why it was our aim to compete with an unchanged driver squad at Le Mans in 2011. I’m delighted that we achieved this. Now we can concentrate solely on the development of the Audi R18 and need not integrate any new drivers into the team, which would have been associated with additional work and risks. The schedule to Le Mans is tight enough as it is.”

The same Audi Sport Team Joest squad also contests the official Le Mans test day on April 24 and the 6-hour race at Spa-Francorchamps (Belgium) on May 8, which Audi uses as dress rehearsal for Le Mans again this year and in which the technically innovative Audi R18 will celebrate its race debut.

Tom Kristensen/Allan McNish and Timo Bernhard/Marcel Fässler are regular race drivers for the four remaining Intercontinental Le Mans Cup races held after the 24 Hours of Le Mans. If required, Audi can fall back on Porsche “factory” driver Romain Dumas to reinforce its squad at Road Atlanta.

“Due to the clashing dates in the DTM and ILMC it wasn’t easy to form the driver squad,” says Head of Audi Motorsport Dr. Wolfgang Ullrich. “For example, it prevented Mike Rockenfeller from driving a complete season in the R18. But with Porsche ‘factory’ driver Timo Bernhard, Marcel Fässler, Tom Kristensen and Allan McNish for the sport prototypes we have a strong core squad with which we are well placed.”

In addition to the races a comprehensive test program with the Audi R18 is on the agenda for all nine Audi sportscar drivers. The tests will be held in the USA and Europe.