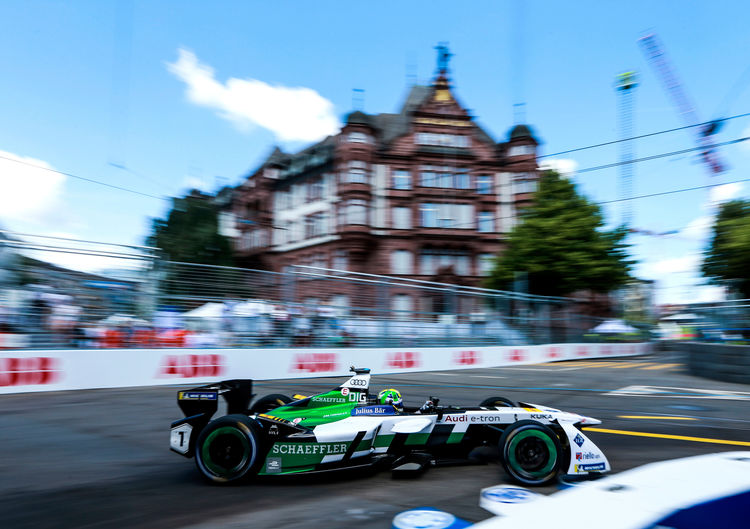 A small tradition continues: This year, like all previous Formula E seasons, the champions will be decided in the final race weekend of the season. On July 14 and 15, Daniel Abt, Lucas di Grassi and Audi fight for the prestigious teams’ title: 33 points must be made up in the two remaining races.

Season four is ending the way it started about seven months ago in Hong Kong: with a double-header weekend. This means double action for the fans trackside and on TV and double chances for victories and points for the drivers. That’s good for Audi who is second in the teams’ classification with 186 points and intend to attack in the “Big Apple.”

The fact that Team Principal Allan McNish’s squad still has any chance in the title race is the result of a strong fightback: where Lucas di Grassi and Daniel Abt only scored twelve points in the season’s first four races, in the last four they have scored 128, 39 percent more than the championship leaders. “During the difficult start to the season, we kept cool and faith in ourselves,” says McNish. “We worked hard both on the race track and back home in Neuburg – even though it will be difficult, we now go to New York with a clear attitude and focus on the championship.”

The Red Hook neighborhood in New York City’s borough of Brooklyn with a view of Manhattan’s impressive skyline will be the venue of the last two races this season. The track, which has been modified and is now 2.373 kilometers long, runs directly along the waterfront of the Upper New York Bay that separates Manhattan and Brooklyn. Long straights, hairpins and fast corners – the layout of the temporary city circuit promises two thrilling races over 45 laps on Saturday and 43 on Sunday. Double headers make particularly high demands on drivers and engineers. Additonally, considering all eventualities, Nyck de Vries will be in New York to support the team as a reserve driver. The 23-year-old Dutchman was also one of the two drivers who took part in Formula E’s official rookie test in Marrakesh at the beginning of the year.

“That Formula E holds a race in the center of the city is simply fantastic,” says Daniel Abt who has won the races in Mexico City and Berlin this season. “In terms of racing, the New York E-Prix was a very nerve-wracking event for me last season. On the first race day, things were going pretty well for me before, while lying in third position, I started coasting shortly before the finish due to a common part issue which was not our fault. So, I still have a score to settle with New York.”

His teammate, Lucas di Grassi, is traveling to the United States with tailwind from his first victory this season in Zurich. That this will be his last race weekend in car number one for the time being does not bother him. “We showed our true colors in the second half of the season and scored more points than any other team,” says di Grassi, adding with a smile: “If you summarized the races in Rome, Paris, Berlin and Zurich, we’d be European champions now!”

Rounds eleven and twelve of the 2017/2018 ABB FIA Formula E Championship will start on Saturday, July 14, at 3.30 PM and on Sunday, July 15, at 3 PM local time. Around the globe, some 70 channels cover the Formula E races. A full list is available on the internet at www.fiaformulae.com.