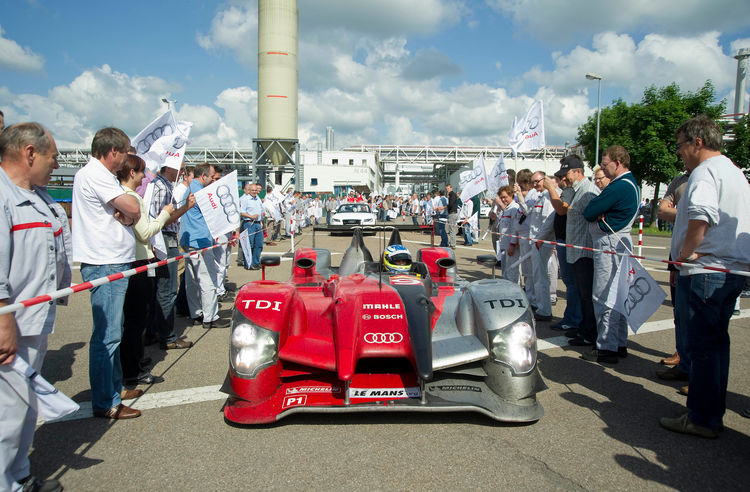 Audi will celebrate its record victory at the Le Mans 24 Hours, which saw the highest speed in the history of the endurance classic that has been held since 1923, with its employees at the Neckarsulm and Ingolstadt locations.

On Monday (June 21) the victorious Le Mans squad will visit the Neckarsulm plant where the more than 440-kW V10 TDI engine of the LMP1 sports car is being built. Mike Rockenfeller, at the age of 26 the youngest Audi driver who celebrated a victory at Le Mans, will pilot the Audi R15 TDI designated as car number “9” across the plant’s premises. Afterwards, from 2 to 3 p.m., Rockenfeller and his driver colleagues Timo Bernhard, Dindo Capello, Romain Dumas, Marcel Fässler, Tom Kristensen and Allan McNish will sign autographs in public in front of the Audi Forum in Neckarsulm for one hour.

In the afternoon the winning squad will travel to Ingolstadt, the headquarters of Audi and Audi Sport. There, Mike Rockenfeller on Tuesday (June 22) will do a lap around the plant premises as well before the Le Mans winning #9 Audi R15 TDI and the other two Le Mans vehicles – cars #7 and #8 – will be showcased for public viewing at the Piazza in front of the Audi museum mobile. From approx. 10:15 a.m. the successful Audi drivers will be giving interviews and signing autographs. In Ingolstadt, Benoît Treluyer will be present as well. André Lotterer cannot attend on either of the two days due to a racing commitment in Malaysia.

At the Festival of Speed in Goodwood (United Kingdom) from July 2 to 4 and at the DTM race at the Norisring on the same weekend the Audi R15 TDI can be seen in action as well. Le Mans record winner Tom Kristensen and Allan McNish will take “their” R15 TDI along to Goodwood. Prior to the start of the DTM race at the Norisring the original winning car of the Le Mans 24 Hours will do some demo laps on the 2.3-kilometer city street circuit along the Dutzendteich lake. The victorious Le Mans driver squad Timo Bernhard/Romain Dumas/Mike Rockenfeller will be at the Norisring too and sign autographs.

Neckarsulm, Ingolstadt, Goodwood and Nuremberg are just four of numerous venues at which the Le Mans winners will be in action. Ever since they crossed the finish line, the phones in Ingolstadt and those of the three Le Mans winners have not stopped ringing. PR commitments and requests are continually increasing. Romain Dumas, for example, will join the crew of Jochen Schümann’s yacht from the Audi A1 team as the “13th hand” to sail a regatta on the final day of the Audi MedCup in Marseille.

Mike Rockenfeller was appropriately received at his home in Altnau on Lake Constance on Monday night: his driver colleague and friend Lucas Luhr had arranged a spontaneous party for the brand new Le Mans winner.