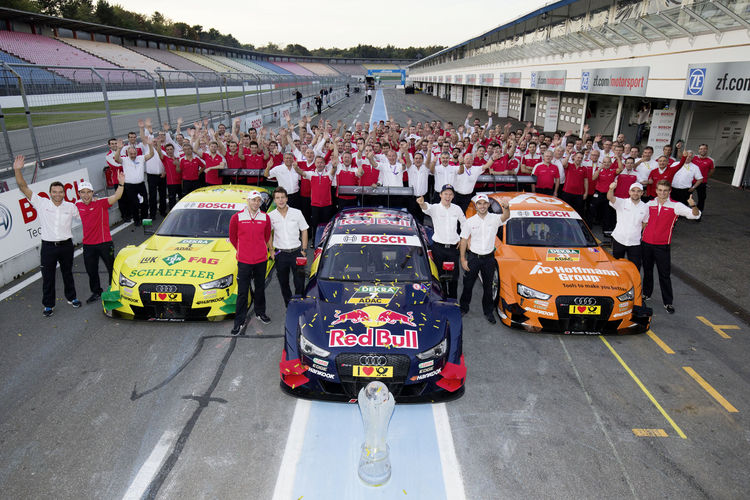 In ten weeks from now, the ‘DTM 2015’ project will begin in earnest for the Audi squad. On May 2, the first in a total of 18 races of the new season will be held at the Hockenheimring. Audi’s mission for 2015: to defend the manufacturers’ title in the internationally popular touring car racing series and to bring the drivers’ title back home to Ingolstadt and Neckarsulm.

“It’s the first DTM weekend to feature the new format we’re all very excited about and that we’re going to continue to intensively prepare for in the next ten weeks,” says  Dieter Gass, Project Leader DTM at Audi Sport. “More than ever before, well-practiced routines and perfect form on the day will be crucial – and now not just in one but in two races per weekend.”

Audi will be the only manufacturer to tackle the title chase with an unchanged driver line-up and has retained the allocation of drivers to the teams from last year as well: Mattias Ekström (S), Miguel Molina (E), Edoardo Mortara (I) and Adrien Tambay (F) will be competing in Audi Sport Team Abt Sportsline, Timo Scheider (D) and Mike Rockenfeller (D) in Audi Sport Team Phoenix, Jamie Green (GB) and Nico Müller (CH) in Audi Sport Team Rosberg. The eight drivers combined are bringing know-how gained in 608 DTM races to the project. They have decided 38 DTM races in their favor to date and won five titles. Another one is to follow in 2015.

Ekström, Rockenfeller, Scheider & company just finished training together at the traditional Audi Sport Winter Camp in the Allgäu. Now, the assembly and preparation of the eight race cars and final pre-season track tests are on the agenda. Two test cars will be used at Portimão (Portugal) from March 2 to 4. At the wheel: Mattias Ekström, Nico Müller and Mike Rockenfeller. The first ‘new’ Audi RS 5 DTM sporting the 2015 outfit will be unveiled by Audi Sport on March 19. The subsequent official DTM tests at Estoril (Portugal, March 25 to 27) will see the cars of Jamie Green, Miguel Molina, Mike Rockenfeller and Adrien Tambay on track and the tests at Oschersleben (Germany, April 14 to 16) the RS 5 DTM cars of Mattias Ekström, Edoardo Mortara, Nico Müller and Timo Scheider.

For the first time, the teams are assembling the eight race cars for the 2015 season based on last year’s monocoques and components at the new Competence Center Motorsport in Neuburg. It takes two weeks to complete an RS 5 DTM that consists of some 4,000 parts. Following the tests at Estoril and Oschersleben, the teams will be taking over their race cars to prepare them in Kempten, Meuspath and Neustadt for the season opener at Hockenheim. Tickets for the ‘DTM 2015’ project are available at www.audi-motorsport.com.