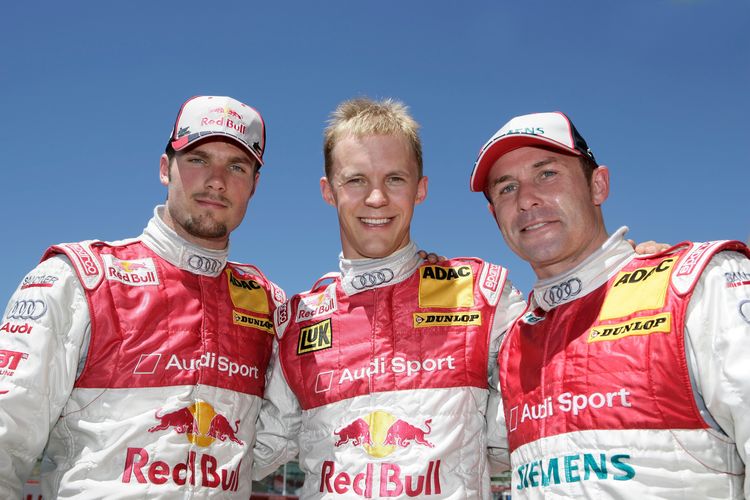 With a dominant qualifying performance Audi secured a perfect starting base for the DTM race at Mugello (Italy). On the longest and most demanding circuit of the year, the current-generation Audi A4 DTM cars were in a class of their own on both days of practice. Putting five cars on the top five grid positions on Saturday, AUDI AG managed its best qualifying result ever in DTM history.

For the first time since the season opener in April 2005, Mattias Ekström clinched the pole position for a DTM race. The Swede thus gave the best of all presents to himself on his 29th birthday. In the last qualifying segment he relegated his team-mates Tom Kristensen, Martin Tomczyk and Timo Scheider to grid positions two, three and four by a narrow margin.

Christian Abt in ninth place barely missed the top eight. Claiming 13th place at the wheel of the two-year-old A4 DTM, Formula 1 test driver Markus Winkelhock made a strong début in Audi’s customer team Futurecom TME. Misfortune struck Lucas Luhr, who was forced into the role of a spectator in the second qualifying session due to a power steering defect, and had to settle for 14th place.

Although the race will only start in the late afternoon on Sunday, a heat battle will be awaiting the Audi drivers. The weather forecast for Tuscanny has predicted 36 degrees in the shade on race day, which means that the 33 laps will put man and material to an extremely tough test. ARD will broadcast live from Mugello on “Das Erste” starting at 5:35 p.m. (local time).

Dr Wolfgang Ullrich (Head of Audi Motorsport): “Our entire squad can be proud of Audi’s best qualifying result in the DTM. A lot of work has been invested in this. The starting grid reflects the results which have been achieved so far this weekend. Straight from the beginning, we’ve been very quick here and in the qualifying, as well, we’ve seen an Audi squad that was strong as a whole. Now we need to translate this into a good race result. The basis for this we’ve created.”

Tom Kristensen (Siemens Audi A4 DTM #7)
2nd place, 1m 44.065s
“A dream result for Audi! The car fits this wonderfully fast track. It’s very hot, but we managed some really good qualifying laps. We already know that the race will be a different story. It’s great that so many Audi drivers are in front and that I’ve got a part in the best team result.”

Martin Tomczyk (Red Bull Audi A4 DTM #4)
3rd place, 1m 44.080s
“This is a fantastic result for Audi – but, personally, I’m very disappointed. I was running in front in both of the first two qualifying sessions and wanted to take the pole position at all cost. Then I slightly got off the track in the final corner and gave away the crucial two tenths of a second. Now I need ten or 20 minutes to get over this and after that I’ll only be thinking about tomorrow – because, after all, third place is a great starting base as well.”

Timo Scheider (Gebrauchtwagen:plus/Top Service Audi A4 DTM #8)
4th place, 1m 44.118s
“A superb result for Audi. Our hopes have been confirmed, which is nice. I had to wrestle a bit with the higher temperatures, the car didn’t feel the same anymore in the heat as it had in the morning. We made a few changes which paid off in my penultimate trial. On the final lap, however, I had to follow Bruno Spengler on my out-lap and was not able to make use of my tyres that well.”

Alexandre Prémat (Audi Bank Audi A4 DTM #17)
5th place, 1m 44.514s
“I’m very satisfied because I finished fifth in qualifying. That’s a very good result for the 2006-spec car, compared with our brand colleagues as well as with Mercedes. Even in comparison with the 2007-spec Audis, which are very fast here, we’re looking quite decent. Now I’m wishing for a good race in order to collect many points.”

Mike Rockenfeller (S line Audi A4 DTM #11)
8th place, 1m 44.845s
“Eighth place isn’t bad and, finally, a good result again for me, although I’d been hoping for more. It was nice having made it into the final segment. I want to thank my team for having provided me with a car that made this possible. Nevertheless, I would have preferred finishing a bit further towards the front.”

Christian Abt (Playboy Audi A4 DTM #16)
9th place, 1m 45.174s
“I’m basically satisfied. I would have liked being a few places further towards the front. The two Mercedes cars that made it into the top eight we could have beaten today, but we didn’t quite make it. For Sunday, I’ve still got two sets of new tyres. With the right strategy, I’ll able to move forwards again.”

Markus Winkelhock (Audi A4 DTM #20)
13th place, 1m 45.758s
“Qualifying wasn’t perfect. After fifth place in free practice, my hopes had been higher. It was clear, though, that things wouldn’t be going quite as well as in the morning. My goal was to end up between eighth and twelfth place. 13th means that didn’t work out completely.”

Lucas Luhr (Philips Audi A4 DTM #12)
14th place, 1m 44.975s
“I don’t believe in good or bad luck. We were doing well. We could have made it into the top eight, and there, anything is possible. But suddenly the power assistance of the steering system failed and the car was very hard to steer. Now I’m back on 14th place – and that’s where I definitely did not want to be.”

Vanina Ickx (Audi A4 DTM #21)
20th place, 1m 47.589s
“The qualifying reflects the free practice. Our performance is simply not right. We tried several different set-ups and were set back by a few minor problems.”

Hans-Jürgen Abt (Team Director Audi Sport Team Abt Sportsline): “The whole team is happy because it worked hard for this result. It’s great to be able to show such a cohesive team performance. But now we need to concentrate on the race, because the cups will not be presented until Sunday. The prerequisites are simply superb. Congratulations to the entire team.”

Ernst Moser (Team Director Audi Sport Team Phoenix): “In the morning we had planned to make up for the work on Alexandre Prémat’s that we lost yesterday. That worked out pretty well. The car was quickly in balance so that we were able to concentrate on fine-tuning the set-up for the qualifying practice. This also worked well with Christian (Abt). Behind the new Audi cars we’ve got the best positions, and we’ve left Mercedes behind us. We couldn’t have done any better than that. We’re highly satisfied to be among the top nine with both cars.”

Arno Zensen (Team Director Audi Sport Team Rosberg): “It’s a shame that we don’t manage making it into the final segment with both cars. Today, this would have been possible. With Lucas (Luhr), there was defect in the steering system. Mike (Rockenfeller) was strong here straight from the start.”

The qualifying result at Mugello