{{ activeItem() }}
Twitter
11/25/20
Carbon neutrality for #climate protection: At #Audi, we are committed to the #ParisClimateAgreement and have tangib… https://t.co/cYFsoopIEW
11/25/20
Even faster #charging and more convenience behind the wheel – we are enhancing our #Audi #etron models with a numbe… https://t.co/4zaiKUEB9V
11/24/20
A #design highlight: Audi Sport is offering a new "bronze selection" for the #Audi TT and TTS. True to the name, el… https://t.co/zD08WAY7MM
11/24/20
Listen up Audi TT friends! There is a new equipment line for the Audi TT and TTS available. &gt;&gt;… https://t.co/9FJST8AZer
Audi on Twitter
YouTube
11/20/20 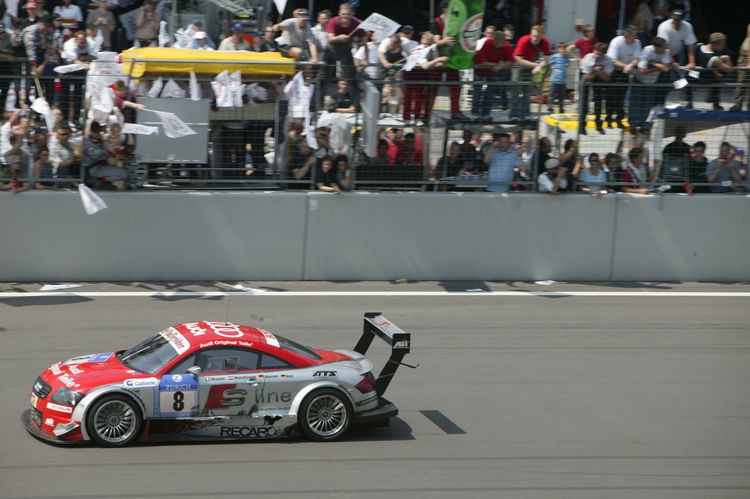 Only months after the sensational title win in the DTM, the Team Abt Sportsline has added another successful chapter to its motorsport history. In the Nürburgring 24 Hour race, the team with support from the quattro GmbH, occupied second place, which was its best-ever result in the classic endurance race around the famous Nordschleife. After 138 laps, Kris Nissen, Karl Wendlinger, Marco Werner and Christian Abt left the opposition, from BMW to Porsche, behind them. At the finish, they were only beaten by the fastest Opel.

Almost 200,000 spectators around the 25.947 kilometres long track saw one of the most exciting races of the past few years. Next to the two Abt-Audi TT-Rs, based on the championship-winning car from the DTM, the two Opel Astra V8 Coupés were the main actors. The over 450 hp strong touring cars were racing each other around the Nordschleife for almost the entire duration of the race. The best indication for the excitement in the Eifel: in the early hours of Sunday morning, the teams of Abt Sportsline and Opel were separated by only one tenth of a second.

As it happens so often in endurance racing, the time spent in the pits decided about victory or second place. After one and a half hours already, the Abt-Audi TT-R with starting number 8 took the lead for the first time and – save for some position changes during the pit stops – defended its lead until Sunday morning. Apart from planned tyre changes and minor repairs, the TT-R was running like clockwork, the drivers successfully dealing with the difficult overtaking manoeuvres against the slower competitors in the 210 car strong field.

In the morning, however, the silver-red coloured TT-R, sporting the “S line” brandmark for the sports packages from the quattro GmbH had to pay the price for the huge pressure on the Nordschleife: a problem with the power supply was followed by gearbox trouble, reported to the box on the radio by Marco Werner. The team decided to carry out a complete and elaborate change of the gearbox, completed by the mechanics in an absolute record time, in spite of a night without sleep. After some 40 minutes, including a tyre change and refuelling, they got their driver back on the track, but it was too much to be still a challenger for the Opel that had taken the lead.

The sister car, the Abt-Audi TT-R with the starting number seven, appeared to attract bad luck in the Eifel: changing of the power steering pump and the gearbox and repair of a defective brake system deprived Christian Abt, Frank Biela and Mattias Ekström from any chance of victory. Having dropped back to 140th place at some stage, the trio of DTM and sports car drivers still made it into the top 30. Thus, Abt Sportsline brought both cars home during the first outing of current DTM-cars in the 24-hour race at the Nürburgring.


Quotes after the race

Kris Nissen (#8, 2nd place): “This was already my tenth start in this race – and it was one of the best. Within the shortest period of time and alongside its DTM-efforts, the team has prepared a fantastic car. I think, we have been seeing some great fights today. All the better that it has ended with this result for us.”

Karl Wendlinger (#8 and #7, 2nd place): “This race really is one of the most difficult of all. Especially during the night, the Nordschleife is a huge challenge, second to none. The fact that we have made it on to the podium, is a great feeling. And of course, it whets my appetite for more. After all, next weekend, the next DTM-round is on already.”

Marco Werner (#8, 2nd place): “For my first weekend with a DTM-car, this was a perfect start. I felt well right away and I have enjoyed the professional and laid-back atmosphere within the team. Too bad that we had to come in for a repair this morning, otherwise, we would definitely have been contenders for overall victory.”

Christian Abt (#7 and #8, 29th place): “Today, I am totally happy, because before the race, many people didn’t expect us to get out Abt-Audi TT-R home at the Nordschleife. My thanks go to our team that has been working for this race day and night, next to its DTM-efforts. Too bad, that we, as drivers, couldn’t reward them with a race win. Congratulations and a big hand to Opel – but we will be doing everything to strike back next year.”

Frank Biela (#7, 29th place): “My weekend trip with a touring car at the Nordschleife has been great fun. All the minor things that have cost us time are annoying, but they are just part of the game in an endurance race. After all, it is just that what makes a 24-hour race to something so special.”

Mattias Ekström (#7, 29th place): “Before this one, I only did one race at the Nordschleife, and with a much slower car on top of that. Therefore, especially the overtaking of all these cars was new and highly exciting for me. I am not at all happy with my result, of course, but we have acquired a lot of experience that will be helpful in the future.”

Hans-Jürgen Abt (team director): “I think that there has hardly ever been a more exciting battle at the Nordschleife than this weekend – at least I couldn’t sleep for one single minute. I am happy that, with the quattro GmbH, we have a partner that is sharing our passion for the Nordschleife and has made it possible for us to race here.”