Abt and “Rocky” are quickest Audi drivers

{{ activeItem() }}
Twitter
09/28/20
Our innovative research project on bidirectional charging with the Hager Group incorporates electric cars into peop… https://t.co/eONYRc0FgG
09/28/20
The #future is #electric. August was a good month for electric and plug-in hybrid vehicles in the top 5 markets in… https://t.co/9fQUOZd5mQ
09/28/20
Congratulations, @FIAFormulaE! This achievement is another important step on our common path to the… https://t.co/HCGXlPt3QZ
09/26/20
When alternative is your first choice. #Audi #etronSportback https://t.co/a7n4YD9SLz
Audi on Twitter
YouTube
09/22/20 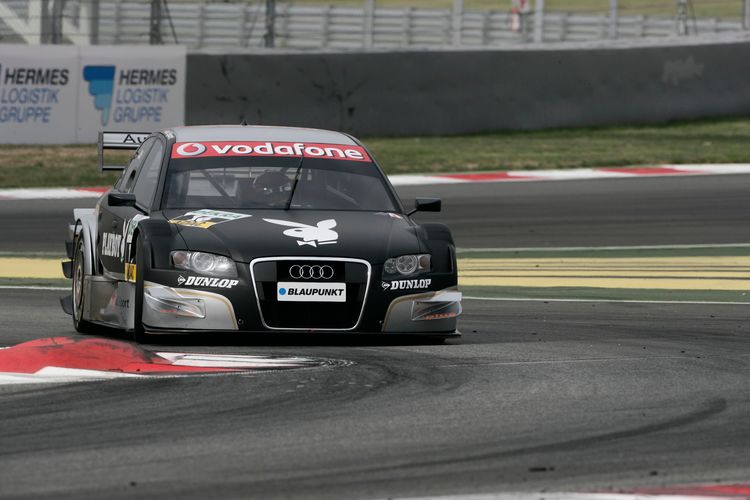 The Spanish DTM round at the Circuit de Catalunya on the outskirts of Barcelona promises suspense galore: The field of contenders presented itself as a colourful and compact mix in Friday’s tests. Each of the two sessions saw five Audi and five Mercedes cars make it into the top ten. In the morning 19 cars were within one second of each other, in the afternoon 18.

The quickest times within the Audi squad were set by the youngest and the oldest Audi drivers of cars from last year: Mike Rockenfeller (23) drove the second-best time in the first test. In the second session Christian Abt (40), who contests his penultimate DTM race at Barcelona, finished in position two.

The fastest current-generation Audi A4 cars that weigh 20 kilograms more than the 2006-spec A4s at Barcelona were driven by Matthias Ekström, who finished third in the morning, and Timo Scheider, who came third in the afternoon.

All drivers complained about continuous changes of the grip level on the 2.977-kilometre circuit on Friday, which made the set-up work more difficult.

The weather could add a further thrill to the qualifying practice: The forecast has predicted rain for Barcelona on Saturday. The fight for the best grid positions will be broadcast live by ARD on “Das Erste”, starting at 1.00 p.m. (local time) on Saturday. Last year, Audi clinched the top three grid positions in the rain at Barcelona.

Dr Wolfgang Ullrich (Head of Audi Motorsport): “Contrary to the forecast, we had dry weather on Friday. Nevertheless, grip conditions varied heavily. That’s why it’s difficult to compare the times. Another interesting fact is that our 2006-spec cars are really doing well. We’re going to look at all the data in order to put together the right set-ups for all cars for Saturday.”

Christian Abt (Playboy Audi A4 DTM #16)
19th place / 2nd place, 1m 07.944s
“The second test wasn’t bad at all, considering that we had a problem in the first session. The car already feels pretty good for the qualifying practice. Tomorrow we need to change our development programme such that we can make some more improvements for the race. On the whole, I’m optimistic.”

Timo Scheider (Gebrauchtwagen:plus/Top Service Audi A4 DTM #8)
7th place / 3rd place, 1m 08.003s
“The positive thing is that I managed a pretty fast lap, although there’s still room for improvement. In terms of long runs the situation looks a little like it did at the Nürburgring when the Mercedes squad was extremely quick on Friday. That advantage was put into perspective on Saturday and Sunday, and I’m banking on this to happen here at Barcelona as well.”

Mike Rockenfeller (S line Audi A4 DTM #11)
2nd place / 5th place, 1m 08.056s
“Our places were okay, but that’s not so important on Friday. I’d have thought that we’d be a bit quicker here. We still need to come up with something, particularly for the long run. On the whole, I’m not completely satisfied yet with the car. We need to analyse the reason in order to improve.”

Mattias Ekström (Red Bull Audi A4 DTM #3)
3rd place / 16th place, 1m 08.183s
“Although Friday is often not very conclusive, I’m sure that it’s going to be a very tight situation this weekend. The times are very close to each other. We learned a lot today and will prepare ourselves for tomorrow as best we can.”

Alexandre Prémat (Audi Bank Audi A4 DTM #17)
4th place / 9th place, 1m 08.199s“It’s been a good day. In the morning we worked on the set-up for the qualifying practice and the race, and in the afternoon we continued our work. We’re very well prepared for qualifying. I’m sure I’ll make it into the final section.”

Tom Kristensen (Siemens Audi A4 DTM #7)
5th place / 14th place, 1m 08.209s“The times today are not conclusive in any way. Of course, considering my situation in the Championship, I can experiment quite a bit more. That’s why we tried out a few far more radical set-up variants with my engineer, but not all of them paid off. Now we’re going to sit together and try a new approach for Saturday morning.”

Lucas Luhr (Philips Audi A4 DTM #12)
11th place / 10th place, 1m 08.238s
“As we had tested here before, we had a lot of previous findings. Nevertheless, we were lacking two tenths. Our problem is taking advantage of the new tyres, as I was almost as quick on the old ones. We need to resolve this for the qualifying practice.”

Martin Tomczyk (Red Bull Audi A4 DTM #4)
14th place / 11th place, 1m 08.241s
“The start to the weekend has been tough – but that was the same at the Nürburgring, and then we were all the way in front a day later. We’ve got a lot of work to do by tomorrow. But we know the direction and that’s why we’re optimistic.”

Markus Winkelhock (Audi A4 DTM #20)
18th place / 18th place, 1m 08.675s
“I’m not totally satisfied. I had to get to know the track, even though that wasn’t all that difficult. I’ve had a bout of flu for the past week. Towards the end of the second session I felt pretty weak, I had a headache and my concentration was dropping off. A slightly better result would have been possible today, but we still need to do some more work on the car.”

Vanina Ickx (Audi A4 DTM #21)
20th place / 19th place, 1m 09.161s
“It’s great being back at Barcelona. Even though the sun’s not shining, it’s pretty hot inside the car. We’ve put in a good day of work after losing some time in the morning due to a small engine problem. In the afternoon, I was very satisfied with the set-up. I came very close to my team colleagues.”

Hans-Jürgen Abt (Team Director Audi Sport Team Abt Sportsline): “Friday is Friday. In this hot phase of the Championship we don’t want to leave anything to chance, so we tried a lot of different things. Our main focus today was not at all on the times but on gathering experience with different set-up variants. That’s exactly what we did and now we’re going to develop the optimum set-up from our findings for the weekend.”

Ernst Moser (Team Director Audi Sport Team Phoenix): “We definitely had a fair to middling day. Alex (Prémat) was relatively quick on used tyres, setting good times, and the car had good balance. With Christian (Abt), the opposite was true: The car had too much oversteer in the morning, but we improved that situation for the second session.”

Arno Zensen (Team Director Audi Sport Team Rosberg): “We can tell that we tested here before. Whenever we have basic parameters, things are going pretty well for us. Today was decent. We want to apply this on Saturday.”