{{ activeItem() }}
Twitter
10/17/21
Adrenaline booster. #RSe-tronGT #Audi #FutureIsAnAttitude https://t.co/YhJC2CCyAq
10/15/21
Travel through time with the new “Audi Tradition” online guided tour by AudiStream. From the beginnings of automobi… https://t.co/vtqChZU5EZ
10/14/21
Driving in the desert. Ready to take on one of the toughest rallies in the world, these are our driver crews for th… https://t.co/w1l87D6Yp9
10/13/21
Along for the ride. Meet the driver crews who will be taking the Audi RS Q e-tron through the desert. Discover mo… https://t.co/S3Jp1Xk691
Audi on Twitter
YouTube
10/08/21 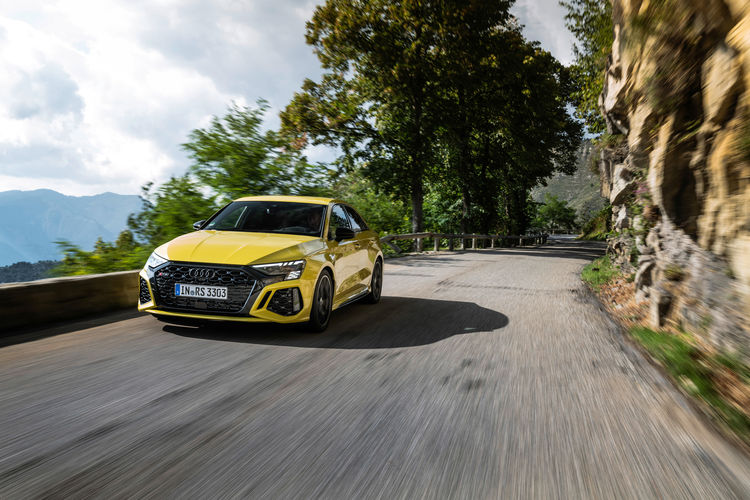 The five-cylinder engine has been an important component of Audi’s brand DNA ever since the first one was introduced in 1976. Even today, its characteristic firing order and unique sound promise a highly emotional driving experience. Now, the newest variant is making fans’ hearts pound and breaking new records. On the trail of a cult engine.

These images are burnt into the memory of motorsport enthusiasts: Pikes Peak in the US. Summer 1987. Walter Röhrl whips his Audi Sport quattro S1 (E2) across a dirt road some 4,000 meters (13,123 ft.) above sea level as if there were no tomorrow. The air grows thinner. Both literally and metaphorically. In some places, the track plunges downhill, 1,800 meters (5,906 ft.) into nothing. Röhrl puts that out of his mind. The rally champion loves this course. His car, the S1 with its 590 PS five-cylinder engine, climbs Pikes Peak quickly and nimbly. The result: a legendary 10:47.850 minutes. At his fastest, Röhrl is clocked at 196 km/h (122 mph). His comment: “It was the peak of what you can do with a rally car.”

Actions like these have helped the multiple award-winning five-cylinder Audi engine reach cult status. “For me, it’s an engine with character,” says Armin Pelzer, head of Powertrain Application Development at Audi. “Other engine concepts may have their advantages over the five-cylinder engine, but they can’t match the distinctness that is completely its own.” Its sound is one important element of that – the powerful, deep roaring and drumming that unleashes a sense of pleasure.

“That sound pattern is unique,” explains Marc Füssel, Thermodynamics/Application Development at Audi Sport. Under the hood, the five pistons fire up and down in their cylinders in time with the unforgettable firing order: 1 – 2 – 4 – 5 – 3. “That’s different from any other engine. Particularly at higher engine speeds and with heavier loads, it doesn’t make as much of a droning scream as a four-cylinder,” says Füssel. “Based on the free inertial forces of the first and second degree, the five-cylinder engine brings a certain irregular operation with it, which makes it all the more emotional, alive, and incorruptible.”

The core of what Audi fans have appreciated since the late 1970s has not changed since then. Even today, the ignition spacing reaches 144 degrees, for instance in the current Audi RS 3: because of the firing order, adjacent and non-adjacent cylinders fire alternately. That produces a very specific rhythm and character. The odd number of cylinders creates harmonic frequencies that accompany the undertone. The engine control unit also contributes to the unmistakable sound. With a heavier load, the flaps in the exhaust gas tract open up for an even fuller sound.

Successful engine concept for the series and rallying

However, the original ideas behind the engine were neither its characteristic running behavior nor its unmistakable sound. With the first five-cylinder Otto engine, which drove the Audi 100 (C2) in 1976, the company with the four rings wanted to catch up with the competition and reach a higher position. The four-cylinder was supplemented with an additional cylinder in order to increase engine displacement and power. The resulting 2.1 liter straight five-cylinder engine had 100 kW (136 PS). A modern fuel injection system increased efficiency and power delivery. Together with the all-wheel drive quattro and turbocharger, the five-cylinder ensured a change in Audi’s image and success in motorsport.

With the introduction of the Audi A4 (B5) in 1994, the five-cylinder said farewell to the B-segment, however a major comeback followed in 2009 – turbocharged with gasoline direct injection for higher efficiency, low emissions, and 2.5 liter engine displacement in the Audi TT RS. The first five-cylinder engine of the new age is actually a commission project for the VW Jetta, produced by VW Mexico. For the US market, we want to develop a robust aspirated engine with high displacement and starting torque. “For us, that was the basis for reviving the turbocharged five-cylinder tradition,” says Pelzer. Pelzer, who had just taken over as head of engine construction back then, remembers that time well. “We had just finished developing the first five-cylinder successor engine, which was then initially transverse-mounted in the Audi TT RS,” he says. The TT RS plus, which Audi presented in 2012, even reaches 265 kW (360 PS) instead of the previous 340 PS.

For the new generation of the Audi TT RS, Pelzer and his team completely reworked the five-cylinder in 2016. Their objectives are beyond ambitious: the engine brings more power with a lower weight, reduced consumption, less emissions, and constructed space that is even more compact. “At the time, we switched to an aluminum crankcase. That alone saved 18 kilograms (39.7 lbs) of weight. In all, the 2.5 TFSI engine became 26 kilograms (57.3 lbs) lighter than its predecessor model,” Pelzer says. For a sporty car in which the engine is in front of the front axle, that is a crucial factor for steering behavior and dynamics on racetracks or in curves.

“We built adjustable camshafts into the cylinder head for variable valve timing. We also introduced a water pump that can be disengaged,” says Pelzer. The Audi valvelift system (AVS) varies the stroke of the outlet valves.

That way, it reduces flushing losses in the combustion chamber and facilitates an optimal flow of exhaust gas to the turbocharger, particularly in the lower rev range. The results are dynamic responsiveness and increased torque.

Complex measures reduce internal friction while increasing power output. The cylinder liners are plasma-coated; the crankshaft main bearings are six millimeters (0.2 in) smaller in diameter. The crankshaft is hollow bored and is therefore one kilogram (2.2 lbs) lighter, while the aluminum pistons have integrated channels for oil cooling.

The history of the five-cylinder continues in the new Audi RS 3 Sedan and the new RS 3 Sportback. Here again, the five cylinders bring a sense of pleasure and even more driving enjoyment. Audi is again increasing the torque of the 2.5 TFSI by 20 in comparison with its predecessor to 500 Newton meters, which is between 2,250 and 5,600 revolutions per minute. “This broad rotation speed plateau with a maximum of 500 Newton meters, which starts at a low rotation speed, was the stated development target,” Füssel explains. “That is something the driver can directly experience and feel.” That is because the Audi RS 3 now accelerates out of low rev ranges faster. The engine's maximum power of 294 kW (400 PS) is available earlier than before at 5,600 rpm and extends over a broad plateau to 7,000 rpm.

The numbers speak for themselves: with the standard Launch Control, the Sportback and the Sedan accelerate from zero to 100 km/h (62mph) in 3.8 seconds – three tenths of a second faster than their predecessor. As an option, Audi can raise the electronically limited maximum speed from 250 km/h (155 mph) to 280 km/h (174 mph). With the optional dynamic package, even 290 km/h (180 mph) is possible – the Audi RS 3’s acceleration and maximum speed therefore set the new benchmark in the compact segment.

“For us in development, it was about new driving modes,” says Füssel. “For that reason, the initially available RS 3-specific Audi drive select modes RS Performance, which is designed for racetracks, and RS Torque Rear, what is know as ‘drift mode,’ are implemented on the engine side in the controller application.” In both modes, we increased engine speeds as compared with Dynamic Mode to increase off-the-line performance. The throttle response is even more direct and has a very distinctive load shift. Moreover, drivers experience very late upshifting and early downshifting as well as optimal control of the linear accelerator at the apex of a curve.

In RS Torque Rear mode, the torque splitter, which is built into an Audi for the first time, generates oversteering by putting up to 100 percent of the rearward torque into the wheel on the outside of the curve. This makes controlled drifts possible on closed roads. In contrast to this very tail-heavy propulsion distribution, the torque splitter ensures the most neutral possible handling in RS Performance Mode with little understeering or oversteering.

Lap record on the Nordschleife

The basis for the record is the interplay of top technologies. The torque splitter distributes torque fully adjustably between the rear wheels – controlled via a multiple disc clutch on each of the drive shafts. During dynamic driving, it increases the drive torque to the outer rear wheel with the higher wheel load. This means that on right turns, there is more torque on the left rear wheel and the opposite on left turns. The Audi RS 3 therefore turns into the curve even better and follows the steering angle more precisely.

That is particularly apparent in combination with the RS Performance driving mode, which, with its own engine and transmission characteristics, is specially calibrated for the racetrack. This makes early acceleration possible upon exiting a curve, enabling faster lap times.